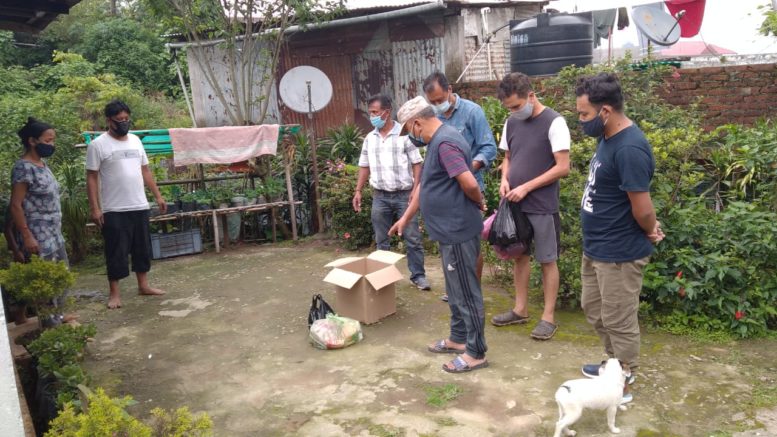 In the Darjeeling–Sikkim region too, we have seen and heard of many families, especially in rural regions being shunned by their neighbours after they contracted COVID. More often than not, many families in the rural regions were socially ostracised and left to fend for themselves. Heart-breaking stories of young children having to take care of their feeble ill parents have been heard from various parts of our region. But there are some villages, who have stepped not only taken care of the families suffering from COVID but set a shining example of how a community should behave when faced with such a situation.

The people of Kothidhura area located in the Phuguri region of Mirik, are setting an example of the COVID-19 pandemic at a community level, acting in a united, efficient, and organized manner, which is worth emulating by others.

The villagers were taken aback when around 30 people of their village tested positive for COVID-19 recently. But, unlike other places, where people usually try to isolate themselves from Covid patients and treat them differently, the villagers adopted a different approach altogether. They stood in solidarity together with those affected and have been supporting them all through.

What should have created an atmosphere of panic, instead induced the people to come together and respond sensibly? They decided to keep the infected people quarantined at their own homes and provide every necessary item to them, including groceries, medicines, and water. The senior people of the village, with the help of the youths, started conducting periodic sanitation drives in the area, while also monitoring the health and requirements of the infected people on an everyday basis.

The ones infected were also counseled about the treatment, sanitation, and hygiene requirements by the villagers and health department officials, who also extended all possible help at their behest. While being in isolation through the infection, it was made sure that they were supported in all terms. The villagers used a collective fund to provide all the necessary items and materials of daily need.

They also spread awareness about anyone having any symptom should not hide or suppress it, but come out instead and get tested. Their response was so effective that the number of infected people in the village kept on going down and now only a few families remain positive, who are also being duly attended to.

The competency of the population and the community of any given place is often identified as one of the most important dimensions or domain of resilience against disasters. The way in which the villagers deployed their minds and resources rapidly and efficiently surely prevented the great damage that the place awaited. They not only made sure that the infected people got cured, but also ensured that the virus didn’t spread any further.

Naren Thapa, the President of the Triveni Sangh Samaj in the village, said, “Once the first person got infected, the virus made its way through into the village. Now, where the virus came from and who it infected wasn’t the concern, but how to get rid of it and how to make sure that each and everyone in the village got safely through the situation was the concern. We made sure that we stood together as a family and do the best we could. I can now say that our village is now more or less safe.”

They also held frequent and multiple testing in association with the Health Department officials and also ran a vaccination drive to benefit all the elderly people who found it difficult to travel to Mirik for the same.

It is worth a thought, how a village stood up on its own to fight and tackle the virus that had made its way inside their village and also defeated it. It also highlights, if other villages too acted on the same lines, how easy it would be for the administration to handle the situation as well. It also shows us how we could together create a safe and conducive environment and a strong resistance against the virus.

In coming together and helping those families in need, residents of Kothidhura a small hamlet in the hills have shown us all a path forward. Together, we can indeed make a difference.