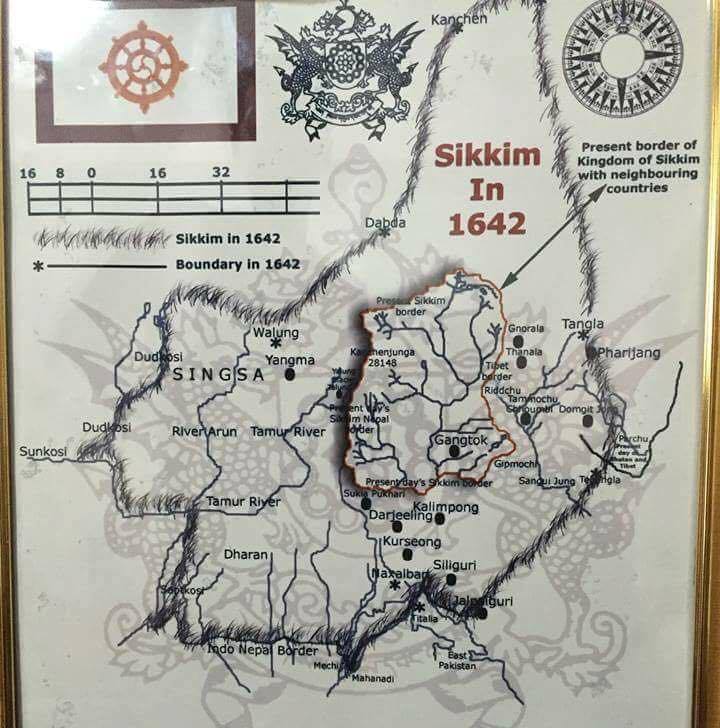 The geographical extent of Sikkim in 1642

Till as late as the early 1900s new kingdoms/countries were still emerging all over the globe and international borders were fluid and not quite yet clearly demarcated.

What historians today state were the territories of the Rajah of Sikkim i.e. all lands in the plains and the mid-hill Ilam regions between the Mechi, Mai, Puwa Mai (also called Kankai Mai) and Deo Mai was called the Char Khola (Land of the Four Rivers) were actually claimed by both Sikkim and by the Limbu chiefs whose domains were not yet then part of the Gorkha Kingdom of Nepal.

“But the political situation of East Ilam remains unclear. Different historians have different opinions, but nobody has been able to prove conclusively who ruled over Ilam … no entity had any effective control or influence … the area between Mai Khola and Mechi was claimed, but ungoverned” (emphasis added) [Schwerzel, Jeffrey; Shanti Tuinstra, Juddha Prasad Vaidya – The Lapcha of Nepal Udaya Books, Kathmandu, Nepal, 2000:7]

These lands were invaded by Gorkha troops in 1788. The Gorkhas sacked the Buddhist Monastery at the top of ridge now known as the Observatory Hill, Pradhan, Dr.Kumar – The Gorkha Conquests: The Processes and Consequences of the Unification of Nepal with Particular Reference to Eastern Nepal, Oxford University Press, Calcutta, 1991 then settled down in a fort on the Nagri ridge and governed Darjeeling for a full 28 years, from 1788 to 1816 CE, appointing Lepcha ‘Subbas’ as their regional administrators and tax collectors and taking care of minor crimes, ample evidence that Lepchas lived in eastern Nepal and many served as officials with the Gorkhali government [Schwerzel et al The Lapcha of Nepal 2000:13]

The Gurkhas attacked Sikkim again in 1884 and reached as far as Rabdentse, looting the Pemayangtse Monastery of all its treasures.

Nepal’s sudden invasion of Sikkim in 1788 was the result of a calculated move to assert its authority on the trade routes to Tibet so that all doors to Tibet could be closed and transit trade fully controlled. [Singh, Nagendra Kumar – Nepal, Refugee to Ruler: A Militant Race of Nepal AHP Publishing House New Delhi 1997:154:155]

Not surprisingly the British were scheming to do exactly the same thing and in May 1774 they ordered George Bogle, to establish contact with Lhasa. Bogle travelled as far Shigatse but was prevented by the Panchen Lama from proceeding any further. Tibet took steps to pre-empt any Gorkha move against Sikkim in the Pallo Kirat, sending down an 18000 strong army under Depon Petsal. So in August 1775, a treaty was concluded between Tibet and Nepal at the Wallung Pass.

“However nothing was said regarding the Nepal-Sikkim borders … Though no Nepali version of any treaty made between Sikkim and Nepal in 1775 has come to light, the royal historians of Sikkim assert that ‘an old copy of this treaty is still extant’ … Gorkhalis demanded compensation for the slaughter of their four Brahmins (Nepal’s envoys). On behalf of Sikkim Rs.4000 was paid by Tibet as blood money … The Sikkim source also claims that the boundary was fixed between Nepal and Sikkim. (Such a) demarcation would now make the recent Gorkha conquests in both Kirat and Morang into parts of Sikkim … these areas were never evacuated by the Gorkhas … Sikkimese claims over Limbuan and Morang seem to have been unjustifiable” [Singh, Refugee to Ruler 1997: 157]

“Till a much later date, Sikkim kept claiming the Kankai River (in Nepal) to be its western boundary, (which puts Darjeeling well inside Sikkim territory) through sources clearly state that the land between Kankai and the Teesta in the plains, known as Morang, belonged to Vijaypur … the references made by Sikkim were to the upper reaches of the river, i.e. it lay claim upon the northern part of Ilam, parts of Panchthar and Taplejung [Singh Refugee to Ruler 1997:150]

Upon the recommendations of David Scott, the English Collector of Rungpore, 7th Chogyal Tsugphud Namgyal (1785-1864) had deputed a Kummoo Pradhan as his tax collector for Morung, but the fellow absconded with the revenues and despite all efforts, the Rajah could never catch Kummoo. The Gorkhas continued pushing eastward and by 5th October 1774 reached Islimbar and Chyanthapu north of Falut (near Sandakphu) in Darjeeling.

Prithvinarayan instructed to his troops: “If Sikkim remains quiet even after the occupation of Chyanthapu and Islimbar, if it does not break the truce and come to fight, cross the Kankai very cautiously. But if Sikkim is offended by our occupation … and breaks the peace, don’t evacuate the plains. You must quickly advance up to the Teesta, which forms the border of Hindupati. The Commander followed the order and by the end of 1774 the Gorkhalis crossed not only the Dantakali temple but also some land in ‘mouza Haskhowa in Tappa Bonigau at Damabadi’ … There is a place called Haskhowa on the east of the Mechi on the way from Naxalbari to Siliguri in the Terai of the Darjeeling District” [Pradhan, Dr.Kumar – The Gorkha Conquests: The Processes and Consequences of the Unification of Nepal with Particular Reference to Eastern Nepal, Oxford University Press, Calcutta, 1991]

Prithvinarayan’s orders were explicit: “Do not go beyond Islimbar and Chyanthapu. In case of Sikkimese attack, chose a vantage point to give battle and defeat them. If you go to the old territory of Sikkim, the relation with Lhasa may turn bad … You must … go beyond the old territory of Sikkim” Pradhan, Dr.Kumar – The Gorkha Conquests: The Processes and Consequences of the Unification of Nepal with Particular Reference to Eastern Nepal, Oxford University Press, Calcutta, 1991

“… The momentum with which the Gorkha troops pushed east gave rise to the very real danger of moving rashly into areas that came within the sphere of influence of the Dalai Lama of Tibet. Prithvi Narayan sent a sharp letter to his commanders ordering that nothing be done that would endanger Nepal’s relations with Tibet … [Stiller Ludwig F: The Rise of the House of Gorkha, A Study in the Unification of Nepal Patna Jesuit Society 1973:132]

“But by the time his letter arrived in the east, Gorkhali commanders had already overrun the Darjeeling Tract and the Sikkim Rajah had already signed a treaty, which marked out the boundaries between the two states. At this point, Nepal had gained the whole of the eastern hills, including all the territories west of the Singalila watershed. In the Tarai the Gorkhas controlled the entire territory as far east as the Teesta River” [Stiller The House of Gorkha Patna Jesuit Society 1973:132]