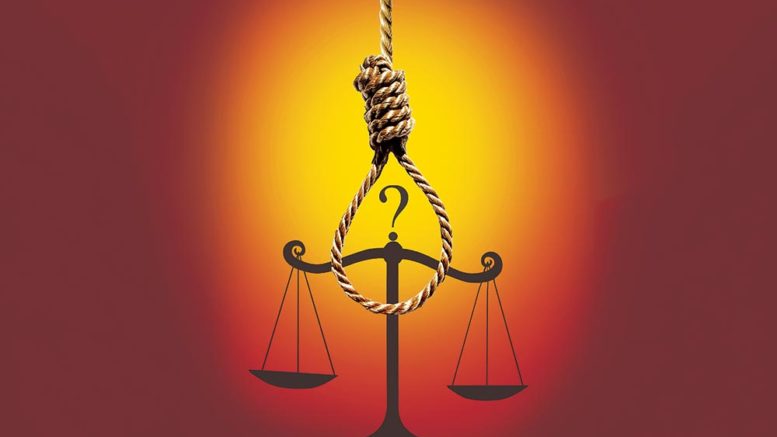 
The Darjeeling District & Sessions Court, Darjeeling sentenced “HANG TO DEATH” to one 43 years old Padam Subba yesterday, the 14th of October 2020, under Section 302 of the Indian Penal Code for DOUBLE MURDER of deceased Maya Subba (50) and her daughter, a minor girl child Pragya Subba (13)

The Judgement was delivered by Sri Uttam Kumar Shaw Ld District & Sessions Judge after hearing the last please of the convict by the Ld Sessions Judge where he said that he was attacked by the deceased and he attacked upon Maya Subba to save himself. “Both mother and daughter attacked upon me…Bacchi nay hathyar uthaya tha. Humko Maaf kardijiye” he said. The Ld Court observed that his submission is nothing but his claim of right of self defense, which is contrary to the evidences of the case.

Speaking to the media, Mr. Pranay Rai, the District Public Prosecutor said, “Mercy at this juncture is like panacea of Covid 19, and it cannot hold license to exculpate the dirty minds of the guilty. Here not only a woman has been murdered but also a minor girl child. We equate our daughters as a gift of God and call them Laxmi, Saraswati, we send them to various institutions without disparity with male child for better and promising education and becoming future pillars of our society, ultimately our nation and not to be brutally murdered, without having seen this beautiful life, Justice should be merciless to the perpetrators of Law. There can be no alternative to Hang to Death in such circumstances and give a loud message that Law Exists no matter what adverse situation mankind is facing.”

While the whole world is fighting the pandemic Covid -19, either medically, socially, politically, it is indeed applaudable that despite of this adverse backdrop the Darjeeling Judiciary has not tired in delivering justice and giving a loud message to every member of the society that crime does not pay. It cannot be debated that Crime esp murder and rape has considerably come down since the past 7-8 years at Darjeeling Hills.

On the 2nd Day of September 2017, while the entire Hill was burning with the Gorkhaland movement and the entire hill was undergoing an indefinite strike, the son of the deceased Sri Sumit Limbu, of Upper Gairi Gaon, Naya Nore Gram Panchayat, P.S. Pul Bazar, an army personnel and the complainant of the case, got a call from his uncle one Dambar Subba, inter alia stating that his mother and sister, namely Late Maya Subba, 50 yrs and Late Pragya Subba, 13 years, were murdered by the convict.

It was revealed from the investigation that on the night of September 1, 2017 at about 10:30 PM, while Damber Subba and his wife, Gauri Subba who lived in the approximately 4-5 min walk proximity from the place of occurrence, heard the scream of one of the deceased Pragya Subba. Hearing the screaming sound, they rushed to the house from where the sound was coming and near the house they saw the convict Padam Subba with a torch light in his hands and going towards his house, when they asked but didn’t reply. When they reached the house, they saw Maya Subba lying dead in a pool of blood at the kitchen and had sustained about 6 injuries in her body. Seeing this Gauri Subba became unconscious, being in fear that the assailant would come they fled and took refuge at the house of one Sudip Gurung. After awhile there was a chaos in the village and all gathered and went to the house of the deceased Maya Subba, after diligent search they found the minor girl Pragya Subba, also in a dead condition on a pool of blood and her index finger was also cut through the middle phalanx exposing the bone including 5 injuries on her body.

The convict was arrested the same morning and the weapon of offence “Bamfock” was also recovered from his possession Charge Sheet was filed vide C/S Number 47/17 on the 12th day Of December 2017, under Section 302 of the Indian Penal Code for MURDER.

In total 18 witnesses were examined.

The major argument that took place before Judgement, between the Defense and the Prosecution team, Mr. Pranay Rai, the Dist Public Prosecutor, who stressed that the case came within the ambit of “Rarest of the rare Case” and the accused needed to be hung to death. Presently Death sentence is not preferred by many countries but till moment our Country still have this Death Penalty in Rarest of the Rare Cases. Recommendation of the Law Commission is there to abolish Death Penalty but till date this punishment has not been abolished. Death sentence would be the exception and Imprisonment of Life should be the Rule.

It was further observed by the Ld Dist & Sessions Judge that according to penology only capital punishment was the answer as two lives were involved who are no more to see the World for no fault of theirs. If this is not the rarest of rare case, then what would be more rarest of rare case. So this Court is required to see that it is coming within the exception or not. Here the life imprisonment would be inadequate in the fact and circumstances of this case and would not meet the ends of justice. Brutality and inhumanity is present as Child of 13 years old is also not spared. The intention with preplanned and cold blooded murder to helpless victim mother Maya Subba and minor girl child Pragya Subba certainly put the Court to think the bracket of Rarest of the Rarest case.

The Ld Court further observed that the motive for commission of the convicts crime was not clear but the circumstances suggests that there was so much hatred in the mind of the convict. The underlying and land mark judgement of Bachan Singh Vs State of Punjab (1980) 2 SCC 684, , Machhi Singh and other Vs State Of Punjab AIR 1983 SC 957, Shankar Kisanrao Khade Vs State of Maharastra (2013) 5SCC 546, Dhananjay Chaterjee case (1994) SCC220 were few of the cases that was relied upon the Ld Dist & Sessions Court.

Today, Sri Uttam Kumar Shaw, Ld Dist & Sessions Judge, ordered that the accused Padam Subba sentenced to Death by hanging till his death for commission of offence of Murder of both Maya Subba and Pragya Subba, for guilty of the Charges offences punishable under Sec302 of the I.P.C., subject to the confirmation of the Hon’ble High Court at Calcutta.