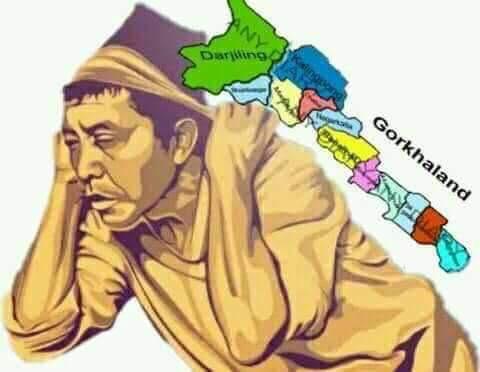 
During the month of October in 2017, Bimal Gurung and thousands of youth, male and female, ‘absconded’ from Darjeeling due to the threat from state apparatus. This month 2020 marks the fourth anniversary. Today it becomes important to reflect upon the political situation of Darjeeling in the absence of these Gorkhaland ‘suputras’. The exodus of GJM cadres left a political space for the other political actors to appropriate. However, these actors instead of occupying the space left void by Bimal Gurung and taking forward the Gorkhaland demand instead, implemented their hidden agenda. 6th Schedule was again brought into public discourse by GNLF. But it would be better for them to remember that this was rejected by all in 2006-07 itself. This demand actually led to near extinction of GNLF from the political space in the hills.  Those running GTA say that they will not campaign in 2021 election on the issue of Gorkhaland. So where and how has the demand for Gorkhaland gone amiss? Who is lending voice to the demand of Gorkhaland? It is only the people and not the political parties and organisation of the present day Hill, Terai and Dooars lending voice and support to the movement. Even in a situation of hostility and intimidation it is the leaders and cadres of GJM who are raising their voice for the creation of Gorkhaland.

This therefore brings to us the question- is the absence or presence of GJM and Bimal Gurung and the numerous ‘absconding’ youths concomitant to the demand of Gorkhaland. It is time we think, reflect and be more reflexive. The voice demanding Gorkhaland has been systematically silenced with the assistance received from certain section of our society. The people who still believe in our goal are being ridiculed in all sphere of our everyday existence and are also subjected to atrocities from the police. Our region has become one where threat and intimidation has become a new normal. GNLF has gone back to its deceptive ways of doing politics. They are pushing the demand of sixth Schedule from the back door. They could have taken forward the demand of Gorkhaland but they choose to settle their political scores to the extent of one of its leaders saying that they will not allow Bimal Gurung to return to the hills. This is the political state of affairs that we are witnessing today. Had they chosen to lend their voice to the aspiration of the people their past misdeed- of completely dropping the demand of Gorkhaland-would probably have been forgiven and more importantly they could have emerged as a strong alternative to GJM. But their acute lack of political statesmanship was visible when their leaders said that PhD were available in the narrow lanes of Kadamtala. This statement only made him look like a fool rather than a leader. CPRM though sincere (I sincerely hope they are) does not enjoy the resources needed to lead a movement. They do not have people with them. Others are there only for the namesake.

BJP on the other hand does not seem to be very serious regarding the promises it had made to GJM on its sankalpatra. Till now nothing points to the fact that they will sympathetically consider the long pending demands of people of Darjeeling hills, Tarai and Dooars.  Otherwise the President of Darjeeling District BJP would not have declared that they will field their own candidates for the three Legislative Assembly seats of Darjeeling. Are we therefore on the cusp of losing Gorkhaland, if not then who is demanding and fighting for it?

This situation brings us to the point do we need Bimal Gurung back in the hills? The local media houses have in their own unique manner and ways already put the last nail in the coffin. They have delivered their verdict. They are only engaging in cultural reproduction. No one expects objectivity from the individual journalists but yes it is expected in the ways and manners they collect news, but they seem to have their own predicaments to analyse and broadcast true and objective news.

The demand for Gorkhaland, whether one agrees or not- I think, hinges on the Bimal Gurung. If the demand is to be sustained (there is no guarantee of its achievement) he has to come to the hills and do  politics. He stills enjoys support from the majority of the people. All those who have ‘absconded’ have sacrificed a lot. Some have not been able to light the pyre of their mothers and fathers. They have not been able attend their sick mothers, fathers, brothers and sisters. They have not had the opportunity to be with their families. Everything they had has been seized by the state. What more do they need to sacrifice to show their loyalty and honesty towards the movement and demand. They deserve to be back among their people, their loved ones and do politics. People should respect their sacrifices and welcome them to resurrect our movement. Bimal’s absence and the lack of agency among the others have made it clear that he symbolises Gorkhaland and should return to the hills as soon as possible and keep alive the hopes of millions of Gorkhas.

You can read the author’s blog here.

The Bridge on Painakumari Khola and a Night of Horror ﻿

Be the first to comment on "Where is Gorkhaland? Who is Fighting for it?"