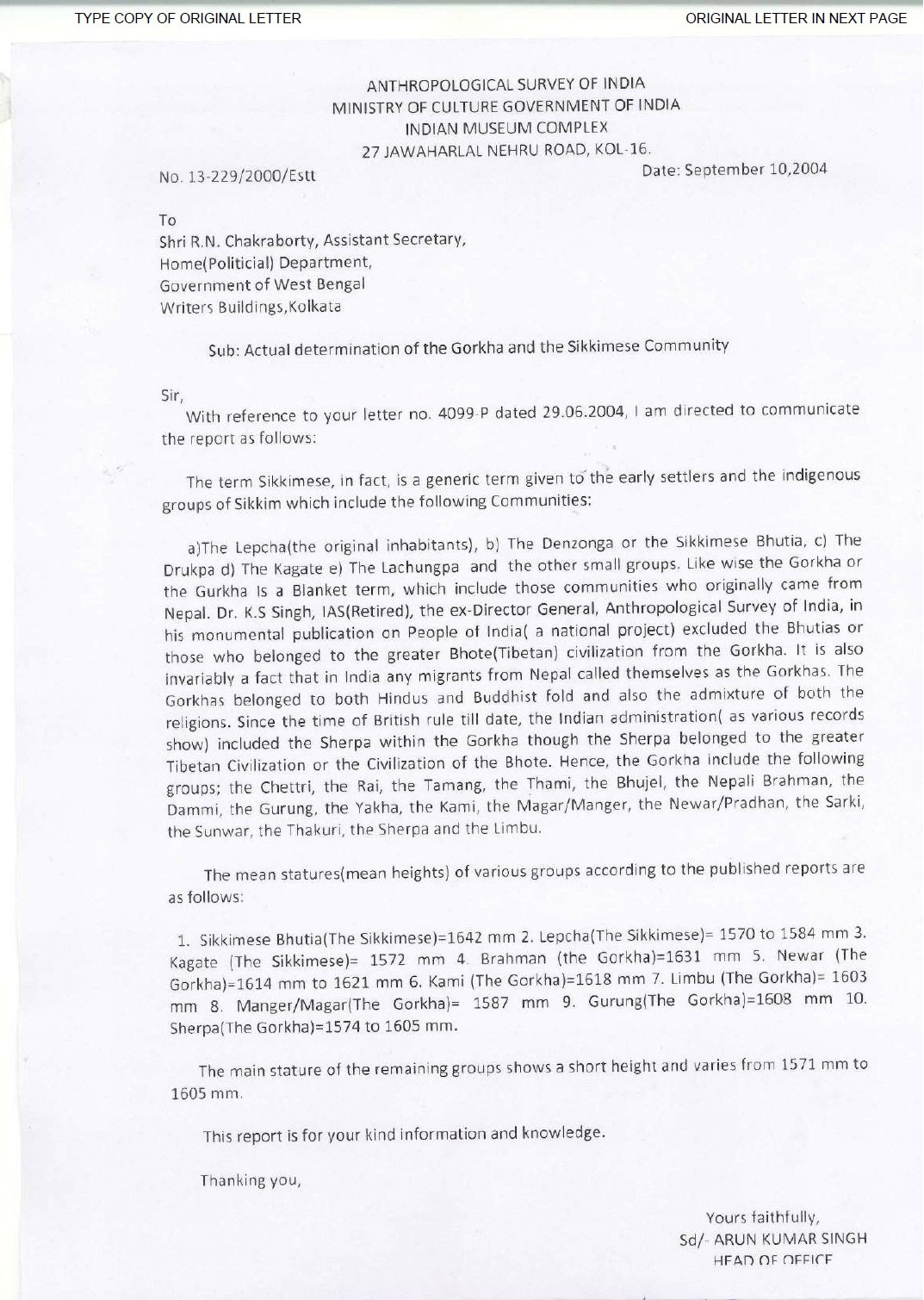 One of our readers, write

This is to bring you to the light of a notification released in the website of http://darjeeling.gov.in recently wherein the govt. has defined ‘Gorkha’ as the community who originally came from  Nepal. But we all know that Darjeeling was originally a part of the Kingdom of Sikkim and was inhabited by the Tsongs (Limbu), the Bhutias, the Lepchas, and the Kirat (Rai) and the Magars, before being invaded by the Gorkhas who were able to subdue the combined indigenous Bhutia and Lepcha armies of Sikkim. The Gorkha army from Nepal invaded Darjeeling in the 1780s, attacked the Sikkimese capital of Rabdentse, and annexed territories up to the Teesta River into Nepal. By 1816 the whole of the area known as British Sikkim belonged to Nepal. After the Anglo-Gorkha War, Nepal ceded one-third of it territories to the British under the 1816 Sugauli Treaty, which included the land area between the Mechi and Teesta Rivers.

The Notification which consists of a letter from the Anthropological Survey of India dated 10 September, 2004 which states that Gorkhas exclusively came to India (which suggests that Gorkhas were never a part of India or were Indians originally) and also that the Nepal migrants at the time called themelves as Gorkhas which might be relevant. But the question that is being posed indirectly is regarding the Gorkha’s identity. So, during the Survey by the concerned esteemed Ministry where from did they gather the information about Gorkhas only being migrants. Didn’t they find or studied the history of Gorkhas and the land inhabited by them?

The letter is itself very vague mentioning Gorkha as a blanket term for migrants of Nepal to India. It has nowhere mentioned that they were inhabitants of land covered by India. The release of the Notification at such a time where it has no relevance poses 6 serious thought provoking questions-

SEE ALSO:  Of Cinema, My Grandmother and Me
Powered by Inline Related Posts

First of all, the question arises why is it being uploaded in the very first hand. After it has been uploaded, what are these political figures thinking? Haven’t they come under the sight of this Notification? As they proudly say that they are the caretakers of Gorkhas, haven’t they even heard of this notification? They claim to know everything about our history and culture, what have they got to say now after this notification has openly been released? They seem to be deaf, dumb and mentally backward in this whole picture of the situation.

Lastly, it is a challenge to all the self claimed Netas who have promised to provide us identity to write a letter or release a Notification enclosing the whole history of Gorkhas stating very  loudly and clearly that we were Indians who were geographically brought to India alongwith the land vide Inter-Country and Inter-State Treaties.

Do they have enough guts to write or spread such circular in the said website clearing away the annotation of Gorkhas as highlighted at the letter contained in the Notification?