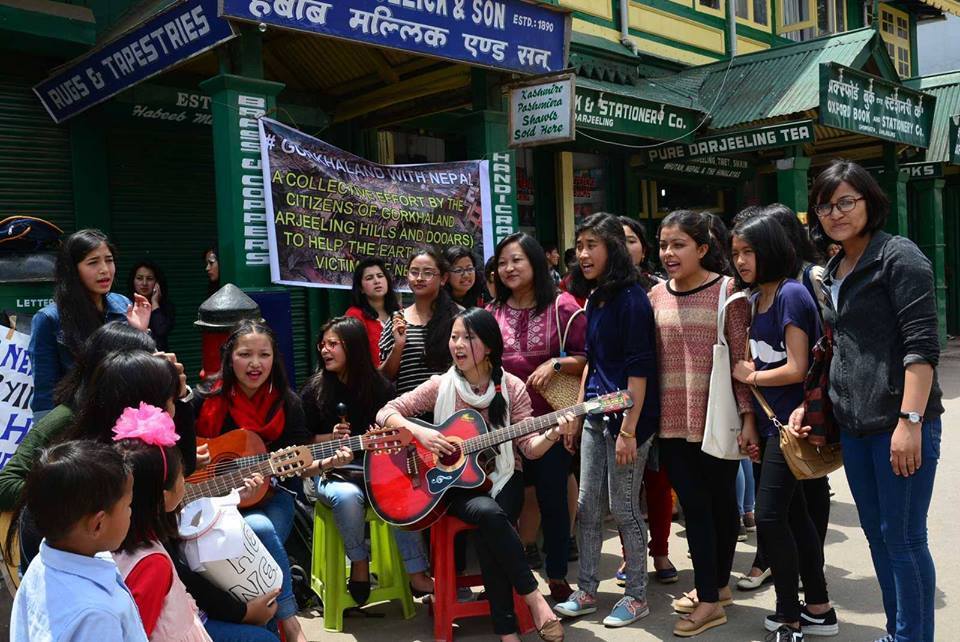 “Endangered Species: The Darjeelingay Spirit”- A Confused Man’s Perspective.For the past few years, we have come across articles in Newspapers and Social Media as to whether we are a Gorkha or a Nepali, people giving controversial statements as well. Being a confused citizen I too often wonder whether I am a Gorkha or a Nepali, and What about the other Non-Gorkhas/Nepali residing in the entire region? Do I want Gorkhaland? Do I want a District/ Subdivision or a Tribal Status? All these bombardments have made me introspect what I want, what I am? to sum it all, what species I really am or belong to?

Then I come across Articles by people like #Bicky Sharma, #NN Ojha, #Dipendra Dipzo #Faiyaz Shafique Ansari and others and not to mention the team at #Darjeeling Chronicle and #Darjeeling Times.Com. These individuals, forums and their articles remind me that I am a Species called the “Darjeelingay Spirit”. This species is rare and unique and truly is a feeling forged by our forefathers our parents, irrespective of the fact that they were Nepali, Lepcha, Bhutia, Bengali, Bihari, Marwari, Punjabi Muslim and others. The spirit of oneness, togetherness, jolly, kindhearted, unselfish and in totality- unified, this is what I am I believe a “Darjeelingay Spirit”.

When I was a kid I believed Nepali, Lepcha, Bhutia was the same and still, I do, this feeling is still there because I was brought up or “hurkiyako” in the “Darjeelingay” way.

I still remember visiting my friend Biswajit Singh’s house during my childhood, his parents were from Bihar but he was born in Kurseong- Darjeeling. The family never conversed in their native language but spoke the Darjeeling lingo, celebrated Dasain and Tihar equally alongside Chhat Puja. Same was the environment all over Darjeeling, the species called “Darjeelingay Spirit” used to play “Deusae” and “Bhailo” in Diwali irrespective of which community or religion they belonged originally, sing Carols during Christmas, have a feast during Eid, hop around the few puja pandals during Durga Puja, enjoy Khapsey during Lohsar and savour the Thekua during Chhaat Puja. Moreover these species prayed by making a cross with their fingers first in the forehead then the chest followed by the right and left shoulders and kissed his/her finger whenever it passed St. Andrews Church, the Grotto at St.Marys Hill or the Statue of “Yatri haru ko Rakchak” near Whistle khola Kurseong and all over Darjeeling.

This species was not even a Christian, yet it did so, Why?

I recently came to read Article in the #Darjeeling Chronicle and was pleasantly surprised that the Gorkha Library at Kurseong was founded by a Lepcha along with others and now we are saying we are different! Ahem…!!!.

I believe they were the true founders of the “Darjeelingay Spirit”

The concept of Gorkhaland is fading now and has become a hen giving golden eggs. The Teesta- Rangit Divide or simply Teesta Divide is gaining momentum now. To be more precise I recently read an article in a Nepali daily where one Mr Politician quoted “highway villages near the Teesta should come under a different district and not Darjeeling because the income generated from the hydel projects would go to Darjeeling and they are trying to usurp these places.” What on Earth! and all this time I thought Darjeeling was a feeling and not a district including Darjeeling, Kalimpong, Kurseong and Siliguri.

This unique and rare species, as I call it the “Darjeelingay Spirit” can now be listed in the category of “endangered species” and will have to be given a “World Heritage” tag to save it. Still, it could go the Toy Train way, where the general population doesn’t care.

How are we going to bring this species alive once more, which is going into oblivion? The decline and decaying which started with the advent of the 80’s agitation till today’s formation of so-called development boards, divisions, area bifurcation and others.

Personally, I am not against the formation of these boards or divisions, but what I am against is the death of our species- “The Darjeelingay Spirit”.

Save it, invoke it.

[In Pics: Darjeeling Together and Darjeeling With Nepal volunteers, along with our generous donors have displayed true “Darjeeling Spirit” during earthquake and landslides…]

“Everyone’s Time is Valuable Not Only Yours’”: Harassment to Public by Motor Vehicle Department

Question Your Leaders, VoxPop, Wake Up !!!

The Never Ending Wait for a Bridge on River Dabai Khola, Tangta

Be the first to comment on "“Endangered Species: The Darjeelingay Spirit”- A Confused Man’s Perspective."