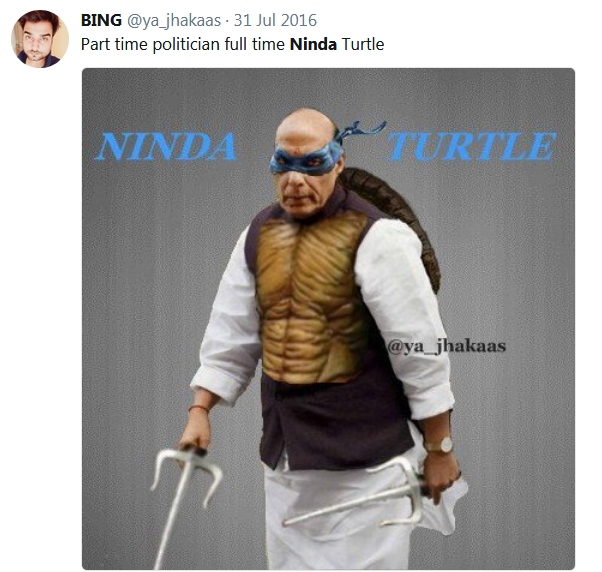 Dear Rajnath Ji,
I am writing to you from Darjeeling – just in case you are wondering where that is, it is right next to the state of Sikkim, which you visit on a regular basis. I wrote “just in case you are wondering,” because I am sure if you knew where we were, you would be aware of what we are going through right now, and you as the alleged ‘Home Minister of India’ would be hands-on dealing with one of the gravest crisis facing the people here – because of the brutal regime of terror unleashed by Mamata Banerjee and her TMC government of West Bengal.

Just in case you are wondering who I am, let me introduce myself to you. I am a first-year college student, and thankfully still alive to write this open letter to you. Many people my age from my town have either been shot at, arrested or threatened and intimidated by the Bengal police; and had you been the actual Home Minister of India, you would have intervened. But since you haven’t bothered to, I am calling you the ALLEGED Home Minister. I know you occupy that post, but I am yet to see you do anything concrete to justify being appointed to that high office.

An actual Home Minister would have instructed Bengal government to back down when they cracked down on peaceful protesters in Darjeeling and shot at them. Instead, you sent in Central forces to aid the Bengal government in suppressing the fundamental rights of our people. You sent 15 companies of Central forces, and they in-turn helped to unleash terror in the hearts of our people.

Whereas all you have done whenever terrorists have struck across the nation, including Kashmir is “Kadi Ninda” – and no I am not saying this, the entire nation is (http://bit.ly/2lEld6M) – which is why, I have named you Rajnath ‘Kadi Ninda’ Singh, as that is all that you seem to do.

While, the Gorkha leaders are being hounded under UAPA (anti-terrorism law) for allegedly causing a few blasts, which we the locals are highly suspicious of since the alleged bomb blasts naturally stopped from blasting once the Mamata appointed Board of Administrators (GTA 2) was put in play. I am yet to see any action being taken to nab those who are openly running arms factory in Malda, or bomb factory in Burdwan. Yet You sir, as the ‘alleged’ Home Minister of our nation, have turned a blind eye to the ever-increasing anti-national activities being run from West Bengal, which poses grave national security concerns.

Given that you were praising “Kashmiriyat” following the terror attack on Amarnath Yatris, I will not at all be surprised, if you decided to recommend Mamata Banerjee for a Bharat Ratna. You, sir, have made me and the Gorkhas living in Darjeeling region, as well as the rest of India very uncertain about your intentions and abilities.

On August 13, You had called upon our Gorkha leaders to call off the indefinite hunger strike by Youths in support of Gorkhaland, with the promise of starting the process of dialogue on Gorkhaland issue soon, and they obliged to your request. After the hunger strike was lifted, you simply disappeared. Then again on September 26, you asked our Gorkha leaders to call off the indefinite strike by the common people of our region in support of Gorkhaland, and they obliged you again. But you seem to have disappeared again.

I am now worried that maybe you are suffering from Alzheimer’s disease – because you seem to be forgetting so much these days.

Since I am a kind and gentle Gorkha woman, let me remind You, sir, this is what you had said on September 26th, “I have asked the home secretary to convene an official level meeting in the home ministry within a fortnight to discuss all related issues. I also appeal to the GJM and its leader Bimal Gurung to withdraw the ongoing bandh and to help create a conducive atmosphere for allowing normalcy to return to the area, particularly in view of the festive season.”

The fortnight according to my calculations were completed on October 10th itself.

Sir, honestly, I think it’s time to replace your Home Secretary, as he seems to have refused to comply with your orders. Either that or much like you, he is terrible in Maths, he doesn’t seem to know that a fortnight comprises of only 15 days. It has been a month and five days since your press release.

Or were you lying to us, Sir? If that is the case, we forgive you, for we are so used to forgiving politicians who lie and cheat.

As the nation stood united to celebrate Sardar Ballabha Bhai Patel – the Iron Man of India, our first Home Minister yesterday, I couldn’t help but compare You to him. While Sardar Patel with the help of Gorkha troops defeated the Nizam of Hyderabad, You, on the other hand, have sided with Mamata to defeat the Gorkhas’ it seems. Sir, you are walking in a Big Man’s shoes, and it is sad that those shoes today seem to be filled by someone, whose feet are too small to stood own ground, and doesn’t seem to justify being in those shoes.

Please do not take my letter in a negative manner, it is just that I am concerned for our nation and the people of Gorkhaland region. Please do not let your politics and your inabilities prevail over the need to protect a micro-minority community of India, who are today living in an emergency like situation. It is rather sadly ironic that the same Bharatiya Janta Party that was formed following the protests against emergency imposed by Indira Gandhi, today is silently supporting the imposition of Emergency in Darjeeling.

Either way Sir, I just want you to know that the common People of Darjeeling are still hoping against hope that you will live up to the promises you and your government have made to the Gorkhas, and very soon at that.

Else, 2019 general elections are coming up, and I am sure much like how the price of Onion brought down the Vajpayee government, this time around a Home Minister who can only do “Kadi Ninja” may be responsible for dooming the Modi government.

Sincerely yours in patriotism,
But not yours in lack of will to protect the constitutional rights of the Gorkhas
Sushma

Following *Sushma’s request, we are only using her first name.