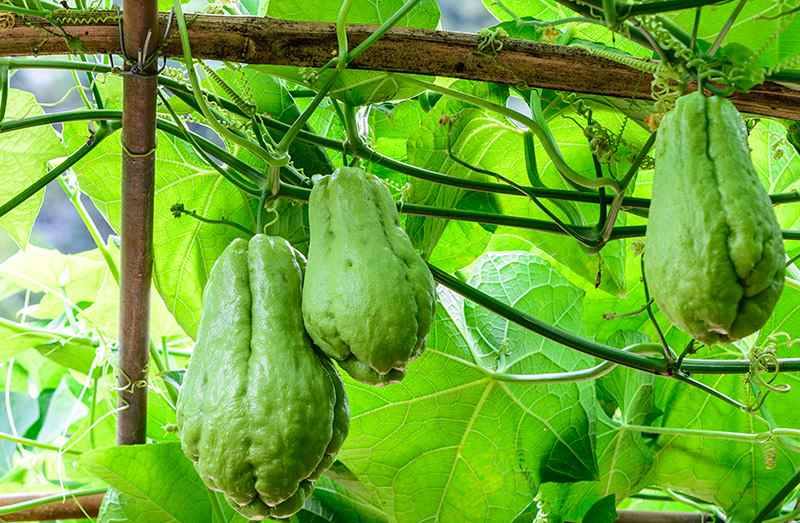 The first flush of green leaves with long stems will soon be found abound in crowded alleys and lanes of the hills and we are not talking about “Darjeeling Tea” but equally and notoriously famous “Ishkus ko Munta”(Stems and Leaves of Chayote) having the looks of a thin guy with big ears and curly hair.
Out of hibernation withstanding the harsh cold winter days, the prickly Ishkus takes a rebirth of sorts, climbing atop bamboo “macchan”, trees, buildings, electric poles and whatever it can get hold of.

“Munta” can be used as a salad, but here in the hills; its best when cooked with small potatoes as an early morning breakfast along with Chapatti, rolled and straight into the mouth along with a glass of “chini ko chiya” (sugar tea).

“Munta” has also found its way into our lingo (slangs) refined in certain ways like for instance “Muntai de na Teslai” or even the harsher “Oi Ya Chitto Munti Haal”. Even the “Ishkus ko Macchan” has invaded the lyrics of Deusae: “Ai! Ishkus ko Macchan! Deusurae…Aye Amitabh Bacchan”.

After the munta floods markets, it’s time for the real deal to make a grand entrance, Hail! The legendary Ishkus, here it comes. I have always loved Ishkus ko Tarkari (curry) and especially the “koya and gudi” part, chewed till only something like a “steel ko jute” remained.
The only thing I dread is what my mother commands “Ishkus Tasidae Hai Nani”. Hell no! answered my heart but just a glance of the “kuccho” in her hands always made me say Hell why not! Cooking is real easy; it is the art of peeling off the skin that is the real deal. For the untrained hands its prickly skin stings like a hypodermic needle and the worst the sticky glue that it leaves behind.

Eat it boiled, make a hot curry with freshly cut pieces of “dalley khorsani” along with ginger and one has a meal ready to be served hot with rice. It takes two to Tango and Ishkus’s partner in crime is “sukeko masu”, in this case, be it beef (dreaded word to use these days) or simply mutton and yes sometimes with “raayo ko saag” attached to it. The tango of the two is mesmerizing and aroma much more enhanced when cooked in firewood and much more if it’s a little burnt. Ishkus proves its versatility as an all-rounder as not only is it used as a curry but are also the main ingredient (stuffing) of almost 99% of momos made in Darjeeling and Kalimpong and the accompanying soup.

The biggest of all Ishkus if I am correct are those coming out of Mirik Busty one should see the size for themselves to believe. Ironically, they are loaded in canters, sent to Siliguri and again from Siliguri we buy it back to the hills later at a higher cost???

An almost lost and endangered recipe or variety is the “Ishkus ko Chana”, back in the days wise hill folk would cut Ishkus into thin wafers like chips, let it dry in the sun in a “nagloo” and stored later to be cooked in the harsh winter days, much like the smelly and pungent “sinky” (has it been derived from the word stinky). Hardly any of the shops sell “Ishkus ko Chana” these days, just a wild guess but it could be found in Haat bazaar at Kalimpong.

The Ishkus plant is exactly like Amitabh Bachchan I mentioned before, the superstar, for its leaves, stems, fruit and even its tuber/root can be of immense value. In fact the Tuber or simply “Ishkus ko Jara” is the most valued and the most expensive part of the Chayote and not only sells “sunn ko bhaw ma” but also tastes like the price one has paid for it.

On a different note when I think of the Ishkus plant, I find a lot of similarities between it, us and the demand for statehood. We are like Ishkus plant, cooked and eaten from the Munta to the Jara, stuffed sometimes into “GOJA-MOMO” and sometimes into “GORA-MOMO”. Sometimes climbing onto whatever “Macchan” comes along our way be it a district, sub-division, development board, and thriving along with the “Grass and Flower”.

Some love munta (DGAHC), some simply say Ishkus(GTA) is tastes better. Some love to eat the “Jara” thinking cooking it will kill the entire plant and some think the leaves and stems should be nipped in the bud so that the Ishkus plant will never arise, not knowing the fact that the more you pluck the munta the more the Ishkus plant will flourish, symbolizing the movement for statehood. There are also some just like the spoilt “dangaunae chora and chori” who have a love and hate relationship with the Ishkus plant. They simply are in a dilemma whether to go ahead with the demand for statehood or simply focus on development agenda and district “Khau bhanne Manpardaina na Khau bhanne Ama (Janata) ley Marcha”.

Jokes and politics aside, nothing symbolizes the grit and the legend of us from Darjeeling, Kalimpong, Dooars, better than the legendary Ishkus plant, we can climb anything, we are prickly outside but soft inside, and don’t underestimate the power of Ishkus and us- we hardy, stubborn but equally versatile, never giving up. No matter how hard life is, how harsh the winter life’s, how deep one tries to bury us, come this spring, come this summer and come to this monsoon we are up…up….uptieee again. However one question comes to my mind, why is the Ishkus plant called as the Gorkha Thee or the Gorkha Tree in Burma/Myanmar??? Any answers….