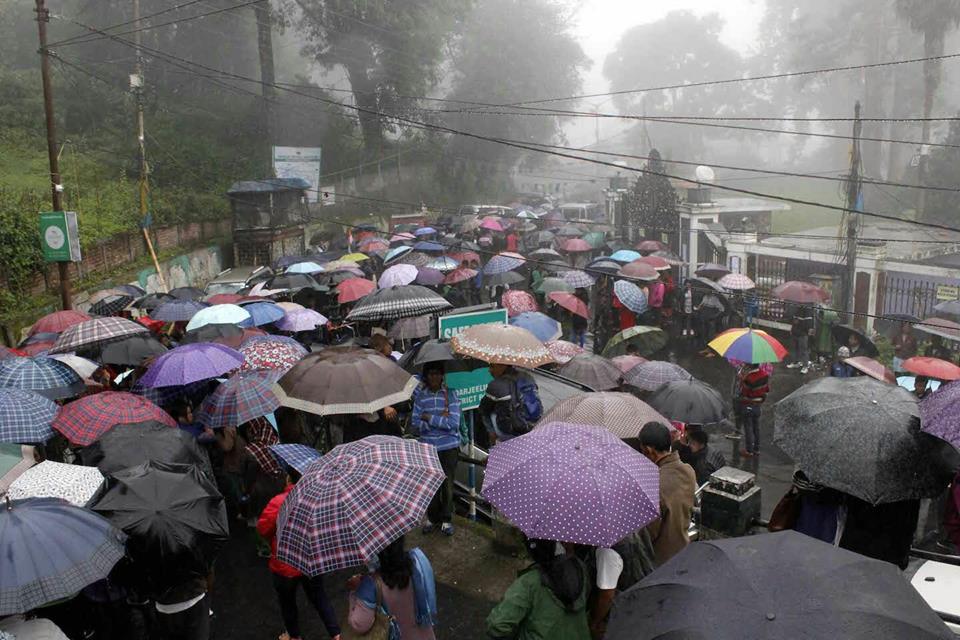 Nobody can trust, predict the weather of Darjeeling, it plays tricks on unsuspecting people at the most inappropriate of times, so to foil its plans, comes out the not so trustworthy Umbrella- an integral part of our lives. This year most of us came out with the kind that had defects and showed signs of wear and tear, ladies, gents, “budi ko chata” “ budo ko chata”, “sasu ko chata” “sasura budo ko chata” didn’t matter and everyone knows why. The rains too seemed continuously unendingly as if the weather gods were pained by recent events.

If one observes carefully how people communicate when it rains suddenly, we notice they are of two types. Ones, who have an umbrella and the other who hasn’t. The one who hasn’t suddenly realized that they have left theirs at the “masu ko dokan”. Why? Because as soon as the person entered the shop, it stopped raining and “Lyaa” he forgot it there; too late, he realized “Lyaa! Masu Dokan mai chodechu” or worse “Lya Ka Chodaey Chodaey”. Weather plays such tricks in Darjeeling that majority of us develop Alzheimer’s.

Just imagine going back in time, going back down memory lane or your recent ones, imagine oneself and the hordes of ”hatteray” common folks navigating their way through jam-packed “Bata ko Ukalo” in Darjeeling, “Hanutram ko Oralo” in Kurseong or for that matter on any narrow roads. What strikes the mind first? Not only is it difficult to hold ones umbrella properly along with whatever stuff one is carrying but equally difficult to navigate “chep-chep ko gallis”. The fight of umbrellas, “Ghar jatro Chata” trying to elbow “black Chinese folding chatas” in return the smaller ones trying to ambush bigger ones. Watching people lose their cool, hearing same old pahadey dialogues “kasto herdai hinnu parcha ni, ankhaii na bhako manchey haru” and the worst “tesko amama ta…sala…..” and the best excuse the English taught us “sorry la”. It is a sight to behold observing and being a part and parcel when it rains.

No matter how big, how expensive umbrella people use, rains of our hills are mischievous like our netas, that it somehow finds its way on making us wet. In common terminology “Chadkey Pani” too cunning to understand. People try to protect their front side, it strikes from back, result –“Dhar Luthrukkai”. The best scene to watch from safe distance is the one when rain combines wind and the umbrella resembles a “disk antenna”; “Haait Kukkur Bhijhai Bhayoo Ni”, “Kattu Dhari Bhijyo Anta”, and when a vehicle comes speeding on our pot holed roads…”chhekda..chhekda huncha”.

There are scenes which most of us encounter, suddenly out of the blue it rains, one tries to open their umbrella, it malfunctions, the more force one uses “Platta” only the handle comes out. Even if the lower parts of the umbrella are intact the rain finds its way through the cap “tuppo” and runs down slowly through the tube and the hand which is holding it becomes wet.

People have ingenious ways of repairing too, if the cloth has left the tip of the rib; just tie a common rubber band, problem solved. If one observes, such umbrella users are abound and each one of us has used this trick more than once in our lifetime. There are those moments when the top spring and runner malfunctions, to be precise in the exact place where it is supposed to hold still and the umbrella goes “jhappai-jhappai” no matter how many times one tries to keep its stead. Here a matchstick, tooth prick or even a small nail comes in handy. In fact, not a single person has a perfect umbrella, some use ones whose handles are missing, some have rubber band tied at the edge of ribs, some have missing “karangs”(ribs/stretcher). If these ribs/stretcher are not missing then they are hanging so dangerously that most often they prick the cloth of the umbrella and make a big “dulo”, worse it pokes and pricks the head and face.

Such moments were missing this monsoon, instead of children holding beautiful umbrellas, office going and common laymen carrying umbrellas of different hues, big scary men holding guns and batons in hands were seen, most of the times chasing people who had come out with colourful umbrellas fighting not only the unfriendly rains but unfriendly batons and bullets too.

This season a new umbrella called GMCC was also found in the market, sadly instead of a pukka umbrella, it turned out to be a kuccha one. Its ribs fell apart one by one and could not withstand the political winds and rains of our place. I wonder such other new umbrellas – GSSS, the newest one of intellectuals NGC, GTA-II can withstand the fury in the cauldron of politics called Darjeeling. Will the “Janta” be left “high and dry” or will they be “totally wet”….Nobody knows hai.

The only hope we have is an umbrella called faith and unity and the “Darjeelingey Spirit” hope this umbrella will tide over unending worst political weather we ever faced. We should never forget and leave this umbrella under any circumstances, not in Nabana, not in Delhi not in Lal Kothi