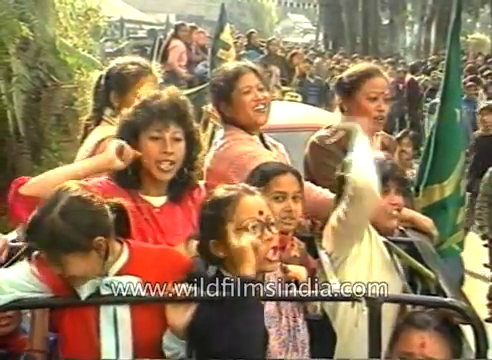 
This Special Series on Gorkhaland Andolan, wherein we seek to document the lived history of our people from the 1986-88 andolan days and beyond. This article by our contributor Divya Pradhan is Part II of her series of recollections. You can read the Part I here. We request all our readers who have lived through this period to kindly contribute your experiences. This is our lived history, and if we do not document it, no one else will.

It was almost a tradition to stay at my grandparents’ place in Phuguri, before we were shunted off to the plains to spend time with our father, whom we hardly ever met. Thulo Ghar, my cousin Nipen’s place which was also the mul ghar for the large network of relatives, was also literally thulo. As kids we loved the house because it had  the best orange trees over which we were given a free run and a TV where a  gaggle of cousins and local kids  gathered, especially on Fridays, to watch cartoons telecast from Bangladesh. Next to the TV was a life-size poster of a man in white holding a bat with the words “Azhar Hazaar” emblazoned on it. Beyond this room was my granduncle’s room and an anteroom, filled with volumes of “Condensed Reader’s Digest”, encyclopedias and English fiction. My mother thought that ‘Wisdom’ and an array of soviet publications like ‘Misha’ and ‘Sputnik’ were what a young mind needed, had no clue about what I read unsupervised in that lovely corner- crime thrillers, stories of intrigue, romance, betrayal, simply delicious prose.

While I read, thulo hajurbuwa lay in bed, with pills, packets of Top biscuits and a flask of water, on the bedside table next to him. He had diabetes so he only ate Britannia Top biscuits. I ate the biscuits, devoured the books, while my cousins watched cartoons on TV under the watchful eyes of “Azhar Hazaar”.

Thulo hajurbuwa died when the andolan was at its peak. After his body was taken for cremation to Manju khola, I was sent with some of my aunts with packets of rasna and water for those who had gone ahead with the corpse. We waited for the malami near the cremation ground, hidden by tall bushes, so that even though I couldn’t see the funeral pyre I could smell a peculiar odour in the air. That was the first I smelt human flesh burn. It was quite similar to the smell of polayko bhainsi ko masu, a staple in newari households during dasain.

Why would someone send me, a kid to the cremation grounds? Maybe nobody sent me, I must gone on my own.

That’s how I said goodbye to the diabetic, who shared his Top biscuits with me and introduced me to the world of English prose.

We reached quite late in the evening. It took us almost four hours in a bus from Siliguri, to reach one of the subdivisions where my father was posted. My two maternal cousins, the ones with the “wanted” father and another paternal cousin, whose parents were in Brunei, were also with us. The next morning, Nipen and my other cousin went to the nearby pukur (pond as they call it in Bengali), to catch fish and swim, so they said. They took my father’s old Hercules cycle, riding half-pytaal (a corruption of the word pedal, for those who were not tall enough to sit on the seat and ride full pedal), all set for a day of madesh ko fun. I remember the distraught look on their faces when they returned shortly afterwards. They told my mother that some locals has thrown stones at them and called them “ghising eir bacchha” (Ghising’s children)

My mother tells me that there were no mobs and no one threw stones at our house. No one throws stone at police quarters.

It’s strange, must have been imaginary mobs in my head.

We are in the news for the first time. Literally, there is a short news report about our paternal house in Tindhare being raided by the police. My grandfather has retired from his job at the Railway workshop and is now living with us. The house has been locked since. We rushed to Tindhare and are told by our relatives that they spoke with a reporter from Telegraph. Nothing is destroyed, our relatives tell us that the CRPF had broken the lock and entered, but when they saw a framed b/w photo of my father in police uniform they didn’t do any further damage.

My cousin Nipen is not so lucky. His house “thulo ghar” has been burnt and razed to the ground. My diabetic granduncle was moved along with his Top biscuits to the kitchen, which stands separately from the main house. Thank God thulo ghar has a fairly thulo kitchen.

Everyone talks about how my grand uncle had been selected for the navy but his mother threatened to kill herself if he went away. So he spent his entire life, living in the house where he was born, working as Garden bau, just to become old and watch his purkhauli house burn in front of his eyes, with his only child missing for weeks.