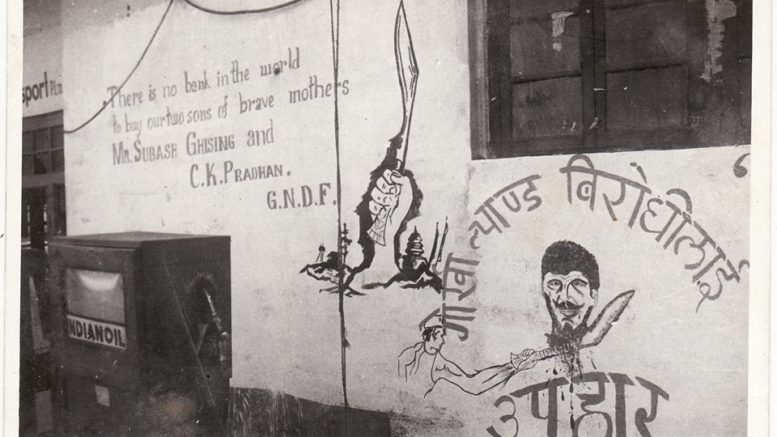 Tolerance of ideas, thoughts and speeches - too difficult to do?

You may have heard this joke about a hen-pecked husband and his wife. His wife was a big bully and used to keep saying “Natrabhanay…. “.

He was so scared of her that he would do whatever she ordered. One day, he made up his mind to stand up to his bullying wife. Later in the day, she hollered , “AUU BHANNRA MOLI HALA TA, NATRABHANAY… “.

Teaches you something about bullies and bullying!

You know, we Gorkhas, are truly a threatened community. The first time I became aware of this was when I moved to Delhi for my higher studies, more than two decades ago. My classmate, a Delhite invited me for lunch at her place. As I sat in the living room, her seven year old brother kept jumping on the sofa. What happened next was simply shocking! His mother looked at him and said, “Aap nay homework nahi kiya hai na Rohan?” Loosely translated as “tapainlay homework garnu bhako chaina hai Rohan?“

See now, this is markedly different from what I have grown up thinking is a perfectly normal conversation between a parent and a child- jhyanpat lay kan tininini bhayapachi, a whack on the head with the homework copy, and only then the question, “HOMBAK GARAYKO CHAINAS? Kaman ma patti tipnu pathaunchu” – this was a real threat because even as kids we had an inkling about the lives of tea garden labourers and though we loved collecting jhikra in winter or playing luki-chori among the tea bushes, we didn’t ever fancy becoming a tea garden labourer. Other eternal favourites were, “eta ko gala uta, uta ko gala …, haath khutta bhaanchi dinchu, buddhi ko birko ma dhakana, etc etc…”, you get the drift! That’s what parenting is at our place- threats and if that doesn’t work, violence in form dhulaii.

When we grew older we had to manage double threats from parents and teachers, and a triple one from our love interests- Suicide threat from girls to boys and “Pura mattidinchu (I will get drunk) threats from boys to girls.
There was an urban legend about a boy who instead of saying “purra mati dinchu” said “timro saathi lai bhagaidinchu“, a Freudian slip, and needless to say the threat fell flat because the girl ditched the boy and no one wants to be seen with the ditchee, that makes you a double loser,being a ditcher keeps one’s self-esteem high.

Apropos of love-shove, I understood that things have changed, when my students told me that they just “swipe right” and move on, akhir, tinder today refers to an app and not what you threaten to do. It’s no more, “timro yaad ma jaali rahey chu“, today kids just swipe right and move on.

Anyway, enough of these daily reminders about my age, I was actually talking about threats. Perhaps it’s out of a deep respect for our cultural norms that state governments and our own netas also immediately resort to threats, whenever they think we have crossed the line. Verbal threat of cha inchi, actual cha inchi, samaaj bahiskar, gherau have been the norm, perhaps because we know no better. I say it all boils down to parenting!

Now, if our parents threaten us, our own netas threaten us, why do we appear so shocked when a non-Gorkha inspector, allegedly, gives rape threats. Shouldn’t we be appreciative of his knowledge and respect for our norms and values?

As I was saying, threats have also changed over the years. Cha inchi – probably because we are vertically wanting and are insecure about our Gorkha height – has always worked. So why say ” Marchu” or “tauko kati dinchu“, when you can say “Natrabhanay cha inchi… ” ?

Things have changed a lot in the past 4-5 years. Nowadays, people in Darjeeling mostly fear intellectuals. One never knows what tricks they have up their sleeves. People also feel confusedly threatened, because all intellectuals want to be MP or MLA, while people are looking for one Doctor or Compounder who can cure a simple joro, without having to go all the way to a clinic in Siliguri.

Threats have also become digital. During the covert ops to undermine the 2017 movement, by the very folks who had been over-mining it, there was a public outrage. And as West Bengal government, keeping our culture and tradition in mind, had used snipers and false cases to make some “maoists” and “terrorists” behave, the public could only voice their outrage on social media. Naba ta thuni halchal ki ta khedi halcha – if you are lucky enough to escape. But as I was saying, about the digital threat, one of the underminers, an ex-overminer himself, threatened one and all with a PPT (Power Point Presentation, not permanent political tamasha) of all What’sApp and social media screenshots, thereby giving an entirely new dimension to the term “Big Data”.

I could also talk about another highly entertaining episode of threat, which gave health drinks like Complan and Bournvita, an entirely different meaning… but I hear some folks have already been threatened for doing this, so, maybe next time…

[Writes: Divya Pradhan, she is an Asst Professor in the Department of English, Mata Sundri College, Univeristy of Delhi]