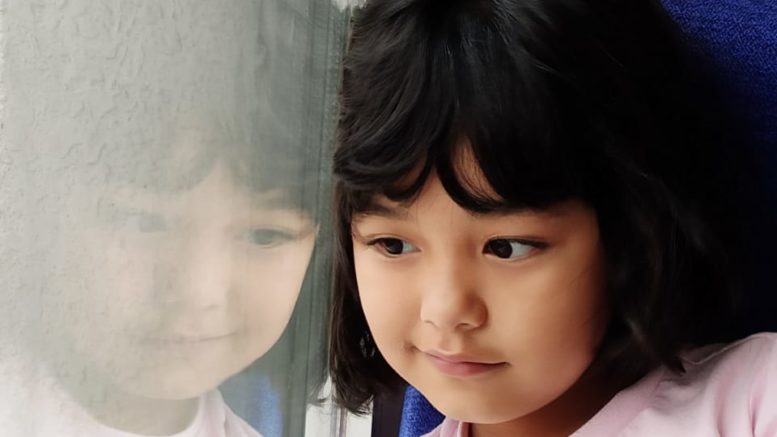 Like every concerned parent I too am of a belief that children learn better if they are introduced to regular hours of learning since early childhood. So with this belief and mental make-up, I have set a fixed study time for my four-year-old. Again like every parent, I harbour this deep seated fear and insecurity that my child will be lagged behind in many areas of development. Try as we might but we can’t deny the fact that the pressure of competition like a deadly virus has already sneaked stealthily into her tiny world too.

So every morning we sit down religiously at a stipulated time to complete the day’s homework. I relinquish the role of an indulgent and complying mother lest she takes advantage of my leniency with her and thus don the mantle of a strict and disciplinarian master. She sits beside me with her book and copy in front and though she is a mere four-year-old yet is clever enough to read and gauge every changing expression on my countenance and my taut body posture. There she sits- sometimes with a weary and wry smile on her face and sometimes with an impish grin as if her little mind is trying to comprehend what my arched eyebrows and shrugged shoulders mean and thus to behave accordingly. Slight mellowness in my eyes or a friendly twitch at the corners of my lips are signals enough to send her a message that a relenting mother is resurfacing and she can be in her elements once again.

But often she sits grumpily with a blatant demonstration of dislike and disregard for this learning hour.

For over a few months now we both, mother and daughter duo, are at this game of pretense, in which I become someone who I like to believe am definitely not- a conformist and a stern upholder of societal norms and code of conduct and my daughter is forced to become what she is expected to be.

But children being children they don’t subscribe to any assigned patterns and norms of behaviour. They are free spirited and a sense of wonder being their innate nature, there comes a volley of inexplicable questions all of a sudden in the middle of a serious learning session from my fidgety four. Now my challenge to be even a mere semblance of a good nursery teacher begins with my rage button triggered on and my pride as a competent high school teacher and my patience are all shattered and dashed to the ground as I in sheer frustration and at my wit’s end try desperately to employ varied methods to drum into her tender but extremely bleary mind the lessons of the day.

The more I realise, my failure to deal patiently with this four-year-old missile of energy and to accept her slovenliness in her work sympathetically, the more my conscience is piqued by guilt and regret for us having undermined the efficiency and efforts of all nursery teachers and also not having given the well deserved respect and value to the nurturers of these tender minds.

Life has queer ways of holding the mirror and showing us our reality and helping us gain wisdom and yet help keep us humbled and grounded. My moments of epiphany came not in those moments when I was seeking noblest of ideas in those thick leather bound books but unlikeliest of all when I was engaged in the simplest of tasks, as considered by society, of teaching my fourth year old alphabet.

The idea of inclusiveness becomes a rarity as we grow more in power. We become more rigid in our thoughts and actions. The world is, no wonder , robbed off its peace and harmony as we are constantly at loggerheads with each other, trying hard to enforce our ideas which we believe to be “absolutely correct” on others.

I too, in my new avatar of an unquestionable authority as a parent-turned-teacher of my four year old in this lockdown, made a mistake of clinging onto “absoluteness” and “conformity” without leaving a room for multiplicity of ideas and opinions. I reiterated to my four-year-old that words like “mad”, “dad” “lad” “sad” etc., are same as they belong to “ad” family words. My daughter, however, was quick enough to refute and said to me that even words like “gag” and “dad” are same.

First i tried to explain to her that they aren’t same as “gag” belongs to “ag” family words like “bag” “tag”’ “tag” etc., whereas the word “dad” belongs to “ad” family words. However, she insisted on saying “dad” and “gag” are the same. This little girl’s obstinacy baffled me so I administered a couple of clouts on her head. I was angry as she failed to accept unquestioningly what I believed to be “ absolutely correct”. She was also scoffed at for her stupidity to differentiate between ad” and “ag” family words. My little one was nonplussed but having soon felt that she has been unfairly dealt with she mustered up all her courage and said, “ But mama, in the word ‘dad’ there are two ‘ds’ and also in the word ‘gag’ there are two ‘gs’ and both the words have letter ‘a’ in the middle that way they are same, aren’t they?”

The multiplicity of ideas, opinions and identities which we fail to incorporate in our education system , in our understanding our life and in understanding human nature and our society have clouded our vision and blunted our senses.

We have become incapable of understanding this vital truth that there is nothing called absolute set of rule in learning.

Life is beautiful in its harmonious inclusion of all its contradictory, divergent and multiplicity of ideas, opinions and identities.

My daughter is right the words “dad” and “gag” are also same. They may not be the rhyming words but are same as they have same repetitive patterns to them

I hugged my daughter, kissed her and patted on her shoulder and said that she was right.

[Writes: Yumita Rai, she is a teacher and a poet]

Be the first to comment on "Perceptions: My four-year-old and I"