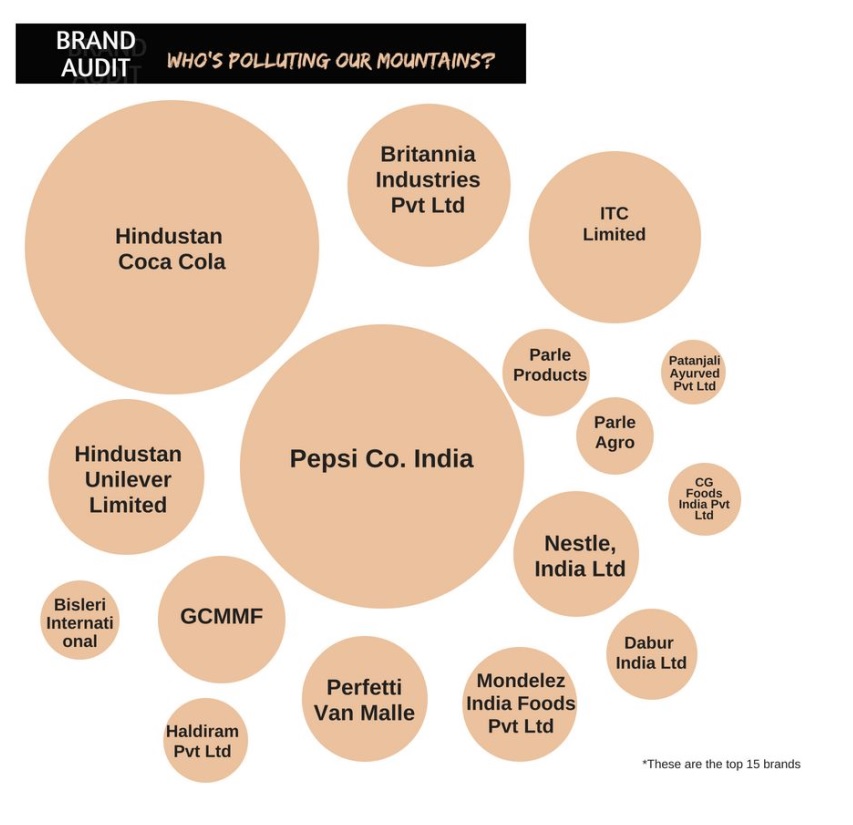 Companies whose packs litter Darjeeling hills the most

The Himalayan Cleanup that took place across the 12 mountain states including Darjeeling on May 26th has revealed that more than 95 per cent of the trash collected during the cleanup was plastic waste. Responding to the call of the Integrated Mountain Initiative (IMI) and Zero Waste Himalaya, 200 plus organisations with over 15000 volunteers from across the 12 mountain states stood in solidarity to organise over 300 events of The Himalayan Cleanup. This was informed through a press release yesterday.

The Himalayan Cleanup was organised to focus attention on the problem of waste in the mountains, specifically that of single use plastic waste. The Himalayas, long been portrayed as sacred, pristine and untouched, has a flip side too, of plastic clogged waterways, waste being rolled down hill sides and burnt, and this was what was intended to be revealed by the Himalayan Cleanup. Remote places in the mountains have serious issues of dealing with plastic waste that have no solutions.
At a presentation on 1 June 2018 at Vigyan Bhavan, Delhi during the session on Himalayan Ecosystem organised by the MoEF CC as part of World Environment Day, IMI and Zero Waste representatives presented the findings of the cleanup campaign to an audience that consisted of Government officials, NGO members and other dignitaries. Ms Priyadarshinee Shrestha and Mr. Roshan Rai presented the details of information collated by number from 89 sites spread across 12 states that revealed that 97% of waste collected was plastic. ‘Not a patch of ground is free of plastic waste’ was the most common expression across the clean up sites in the 12 mountain states, they stated.
These figures were arrived at as a result of the waste audit organised as part of the cleanup which provide insights to the consumption patterns as well as the type of waste being generated in the mountains. The top 5 polluters by number across the sites were Multi layered plastic such as that of popular snack food items, PET bottles, single use plastic items, other plastic items and tetrapak packaged items. In Darjeeling most waste cannot be processed locally

Taking the question of who is responsible for the waste, the Himalayan Cleanup included a brand audit which was conducted in collaboration with Global Alliance for Incinerator Alternatives -GAIA’s national brand audit which has covered 10 cities in India. The brand audit reveals the top brands that are polluting our mountains and demands that the brands take responsibility for the waste through Extended Producer Responsibility mechanisms. The Himalayan Cleanup shows that the top 15 plastic polluters are: Darjeeling Waste composition as recorded in the audit

The Himalayan Cleanup recommends Mountain Policies to stop single use plastics and to phase out multilayered plastic. Extended producer responsibility especially for multilayered plastic, PET and tetrapak is of utmost necessity. No incineration/burning of waste in the sacred and ecologically sensitive Himalaya is also an important recommendation, for the Himalayan states, where burning is seen as the most common solution. Tourism and defense which have large waste footprints in the mountains need to be integrated into waste management systems. Special resource support to the mountain states needed considering the challenges of geography and connectivity.

Member of Parliament from Sikkim, Shri P D Rai, who delivered the keynote address at the event spoke about the urgent need to address the issue of plastic pollution in the mountains, and that local and regional policies must be strengthened to bring about sustainable waste management.

The Himalayan Cleanup was anchored together by the Integrated Mountain Initiative and Zero Waste Himalaya. IMI works across the 12 mountain states on issues of mountain policies and advocacy. Zero Waste Himalaya is a platform of organisations and individuals that advocates for sustainable waste management practices in the HImalayan region based on principles of zero waste. The group has been actively working across the Sikkim Darjeeling landscape with the relevant government institutions, and also on building a volunteer base with an outreach to schools and colleges. The Zero Waste Himalaya group has been working on waste issues for the past 10 years, and the theme of beat plastic pollution for World Environment Day provided the right opportunity to voice the concerns and challenges of waste in the mountains to a larger audience.

A workshop organised by IMI, ZWH and RMDD on ‘Envisioning Sustainable Waste Management Pathways for the Indian Himalayan Region, May 11 and 12, 2018 at Gangtok paved the way for The Himalayan Cleanup with the participation of 12 mountain states, where the planning for the cleanup was done. The workshop highlighted that mountain states currently had little or no waste management, and the most common practice was to transport and dump, and burning of waste. Mountain specific management issues and policies on waste was also deliberated upon during the workshop, and how zero waste practices could be embedded into the planning processes.

Be the first to comment on "SHOCKING: Pepsi, Coke, Nestle, Britannia, ITC Cause Most Waste in the Mountains – Reveals Audit"