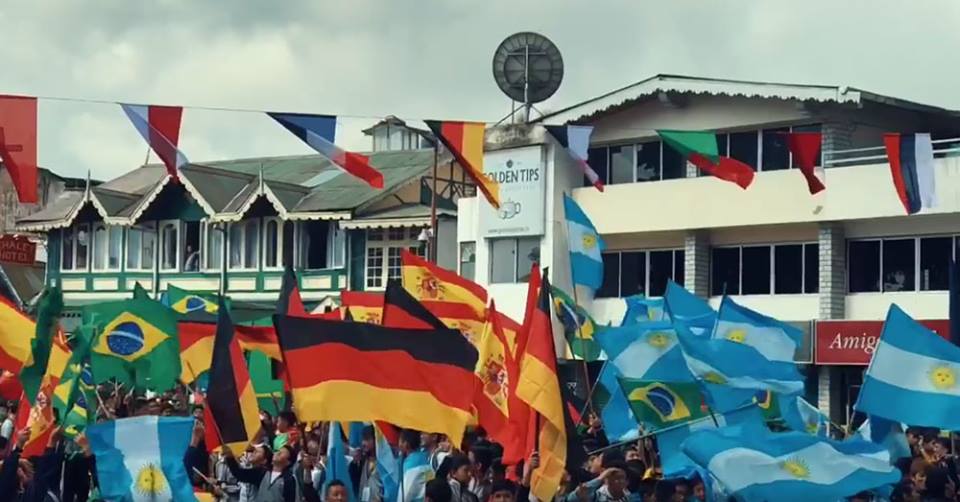 World Cup - when you have no home team, or home

“Yes maams!!” – came a typical Darjeeling greeting from behind, as Dhiren was getting himself a Saada Paan at the Golai mathi ko Paan Dokan. Walking down there was Thuley, an ironically small man to be named Thuley, but he anyway compensated it with his outstanding speaking skills. To say, if Appa and Tarzan had to breed a child together, we would get the oratory skills of Thuley. No wonder he was about to be elected as the President of the YUMS – Yeta ra Uta Motor syndicate.

Getting back to the story, Thuley seemed extraordinarily happy, which was very unusual as he had been visibly very angry for past few days. Having had to go for CM duty forcefully at the peak of season time hadn’t gone too well with Thuley, but that phase seemed to be over.

“Bhai cigarette le ta ewta” – said Thuley extending his hands towards Mukesh, the Paan Dokan guy, as he quickly returned back to his yet to start conversation with Dhiren asking, “Kun team ho haw maams anta?”

“India” replied Dhiren, as our national team had just routed Taiwan 5-0 in the ongoing Four Nations Cup. Like almost everyone else in Darjeeling, it was apparent Thuley had no clue, he was dumbfounded.

It almost felt like Thuley was eagerly awaiting for Dhiren to ask him precisely that question, “Carnival ma haw bro!! Gayenaw timi?” said Thuley, to which Dhiren shook his head depicting a negative gesture.

SEE ALSO:  Portrait of an Artist: Luthor "to become our people"
Powered by Inline Related Posts

Dhiren had seen some pics on Facebook on his phone with a cracked screen, and had nearly mistaken it to be the inauguration ceremony of the World Cup.

Dhiren, as any other ignorant fool, started to question the idea behind the holiest event ever to have been organised on the soil of the World Cup Town. He wondered, “alikati laaj garnu ni haw, shahid haru ko khoon chihaan ma aaloi cha, k ko carnival”?

This might have been the biggest mistake of Dhiren’s life, just that he didn’t see it coming. Afterall, to be challenging someone as knowledged and bright as Thuley, you need to have all your cards right. “K vaneko haw maams? Aabo Gorkhaland ra shahid ko naam ma hagnu ni na jaanu hola?”, said Thuley, with a slightly raised voice. Dhiren couldn’t hold back his stupidity and replied, “hawama k ko carnival. Mukh ma moi chaina, kuni k ma ghiw chahiney harey..”

Thuley’s Brazil flag had already started gaining a reddish texture. He challenged Dhiren by reminding him that people of Darjeeling had the right to celebrate and that they should have such carnivals more often. “Array.. World Cup ho, kina enjoy nagarnu? Gorkhaland na paayinjel kei na celebrate garnu hola?” he furiously retaliated.

He carried his bag of Dabur Lal Toothpaste and tos-roti, and started walking to his home.