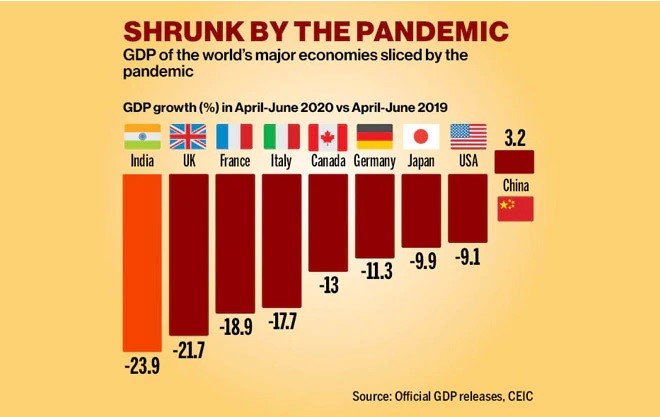 
-23.9% GDP contraction in Q1 of 2020-21 has put India among the worst performing major economy in the world. While hardcore supporters of Modi government continue to argue that, not only India but major economies also have crumbled due to COVID pandemic. They even assert that USA with only a 33 crore population is also doing pretty bad, besides wisely ignoring the 3.2 growth of China, which was ground zero of the Cornovirus pandemic.

In fact, China is the only major economy to have shown a 3.2 percent growth. India has registered the highest contraction among the top-10 economies in the world today. The consequences we see unfolding, one may trace back to the stringent lockdown measures adopted, which forced all manufacturing units to remain shut, while the country’s COVID cases count was merely 500.

The contraction in GDP would be close to 25%, if we exclude agricultural activity in Q1 FY2021. It is the agriculture sector which have grown tremendously during the lockdown, that’s an Act of God, thanks to monsoon and other factors – such as migrant workers coming back home and planting crops in fields, that would usually go fallow.

Nonetheless, other sectors like construction contracted to 50.3 per cent and Trade, hotel, transport, communication contracting to 47 per cent.

These figures doesn’t not include the unorganised sectors which were closed during the lockdown. If the data of these sectors would also be included then the GDP would further dwindle.

So are we heading towards an economic catastrophe??

However, we may presume, what does it imply mean to the common man ??

It implies that Recession has already hit us hard, the fall in GDP has constrained demands in the market, we may not be able to spend, as we don’t have enough money, it would further restrain demand.

What does it imply for the job seekers ?

It is a sad proposition to acknowledge that jobs would no longer be available in a country where the majority of the population are youths. Graduates, post graduates, who were hoping to get jobs after lock down.

With steep fall in GDP, rural and urban employment is bound to be impacted negatively. Many casual labourers and skilled labourers who have returned to their villages during the lockdown, may return to the Urban centres for work. However, with Construction, Trade and Tourism contracted to an average of 46 percent, they are not likely to get jobs. The only way by which these labourers be restricted to go cities and towns looking for jobs is to increase the rural employment. The one way of doing this is to increase number of days in MNREGA from 100 to 200 days or start some skill development workshops and training in rural regions, until the sectors like Construction, Trade and Tourism is revived.

Loan Moratorium be extended for another year

Centre should identify sectors to access impact of COVID -19 and disburse varying benefits. The RBI should issue circular and extend loan moratorium for another altleast one year, the states with higher income ratio may possibly may increase upto two years.

Welfare schemes and disbursement of Rations to 80 percent of population

Since majority of the Central government’s economic packages were disbursed as a means of loan to MSEMs and ration distribution to the people. The actual beneficiary of these packages are grim in practice. The Central government in association with State Government and Gram Panchayats should ensure that the welfare schemes for the poor, reach in time before it’s too late. Schemes like MNREGA, ex-gratia for JAN DHAN account, free cylinders under Ujjwala Scheme, Medical insurance for frontline COVID warriors, Widow pension, Construction workers fund to support workers, provident fund schemes district mineral welfare fund for medical testing and screening to help combat spreading infection .

The most important would be to implement ‘Garib Kalyan Rozgar Abhiyaan’ This scheme is already in a mission mode for 125 days in 116 districts, but now it’s time to implement it in all districts of India for the next one and half year. Doing so will help those migrant workers who have lost employment in urban centres to sustain their livelihood in their villages.

There are almost 200 state laws and 50 Central Labour laws existing under these circumstances it would be wise to bring more stricter labour laws as chances of workers being exploited at factories and construction sites is more. Hence, more stringent labour laws would protect their rights.

It is felt that Informal sector workers and vulnerable groups like street vendors, taxi-drivers, auto-rickshaw drivers etc have not received support from the government, but they too have to pay taxes and other cess. They should be exempted from paying taxes. The insurance or other taxes be extended for another year.

Any rise or fall in GDP is a contribution of the three sectors of the economy significantly or not contributing. It is seen in the last quarter that agriculture sector has a potential of growth. Hence, the government should encourage farmers and peasants in India positively and ensure that the loans that they are tied to may be paid off.

I, We and the Pandemic

The Chairman GTA Relief Fund Should Be Put to Good Use