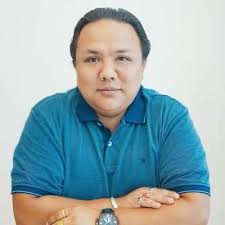 Taking a political stand, that is rarely seen in the hills these days, former GNLF Spokesperson and Legal Advisor Neeraj Zimba Tamang has spoken out against the removal of the names of absconding GJM leaders Bimal Gurung, Roshan Giri and their families.

Highlighting the peril facing the Gorkha community, Mr. Zimba said, “One should have the courage to call out injustice when one sees it unfolding. Even though GNLF and GJM haven’t seen eye to eyes in the past, we oppose the removal of their names from the voter’s list.”

Showcasing why this removal of names posed such a threat to our community, Mr. Zimba said, “Bimal Gurung was someone who held a constitutional post, today if his name can be removed so easily, can you imagine the threat that common Gorkhas now face? Anyone who will speak for Gorkhaland can be similarly forced to shut up, and their names removed from the voters’ list.”

Mr. Zimba said, “the only way to oppose this is to unite and protest collectively, against this politics of vendetta.”

He has urged other political parties to all speak out against this removal of names and has also urged Binay Tamang and Anit Thapa to join the protests.