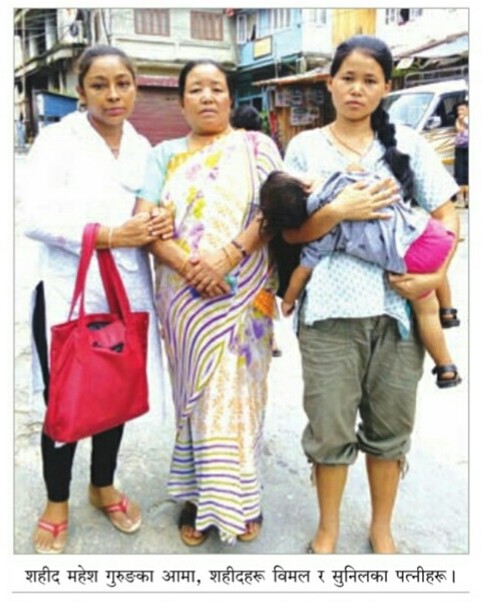 In the Hill Terrain and Dooars Sports Club Award Presentation Ceremonial function organized by Darjeeling Police, the families of martyrs who laid down their lives for Gorkhaland during the movement were invited to receive the compensation from the state government.

Out of the enlisted 9 families, only 5 families attended the ceremony.

The remaining families who declined to attend the ceremony expressed their reluctance to receive their compensation.

In this context, when the families were contacted Anjana Rasaily, wife of martyr Shasankar Rasaily opined that in case of extending support in the form of financial aid government could make it happen from the miles of the distance. But expressed her resentment receiving the compensation of cheque in the name of her martyr husband who was brutally killed by the state forces during Gorkhaland movement. Further, she sought a permanent employment to one of the members of a family if the government was keen on extending financial support to the martyr family. She stressed upon a sustainable financial solution from the government as her martyr husband was the sole bread earner of the family. She expressed utter dismay over the dismal future of the family and pain over leaving her child alone at home, unlikely to work remaining away from home for hand to mouth of the family.

Tracing back the unfortunate ordeal of her life, Anjana had lost her husband on 17 June 2017 during the confrontation with the police forces at Singamari, Darjeeling.

On the very same day residents of upper Relling, Gumbatar, Khadka Bahadur Gurung and Indra Gurung had lost their son Mahesh Gurung. The old man also expressed his discontent like Anjana Rasaily against the government’s arrangement of financial aid for the victims. Furthermore, he added that his agonized heart denied him to receive the cheque standing on the stage of the ceremony over his son’s death. He was of the opinion that government could grant the aid through bank deposit in his account rather than presenting it publicly.

Both Khadka Bahadur Gurung and Anjana Rasaily lamented that one lost his only old age recourse,son Mahesh Gurung and the other, her husband Shasankar Rasaily, whose supreme sacrifice for the soil if bear achievement for the entire Gorkha community at the cost of their martyrdom then they will receive anything standing proudly on the stage of such ceremony.

Children and Youths – This election,no one is talking about them

EXAMS – At the end of it all, you remain who you are