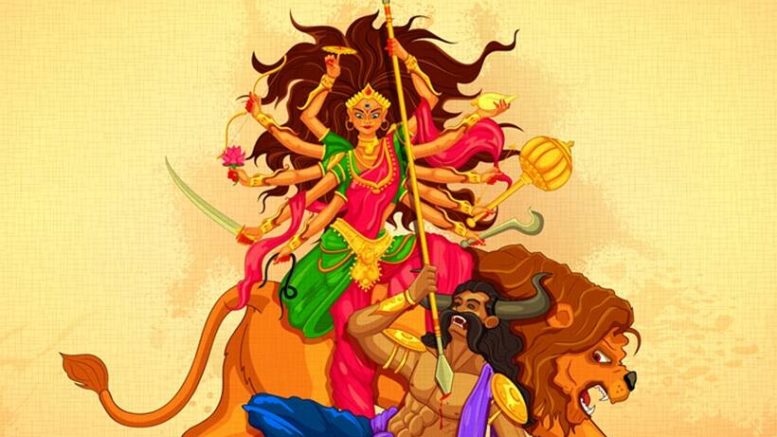 
Dasai is here folks and to celebrate Dasai we will be sharing with you the story behind Navaratri and the significance of praying to Maa Adi Shakti in her various forms. We hope all of you will enjoy reading the stories, as much as we have pleasure in sharing them with all of you.
……………………………

Mahishasur the demon king got boon from Lord Brahma that no man on will be able to kill him. After getting the boon, Mahishasur grew very powerful and created havoc on the earth. Under his leadership, the Asuras defeated the Devas. The world was crushed under Mahishasur’s tyranny.

Knowing that since Mahisasur had Lord Brahma’s blessings, for the Devas the only redemption from Magisasur’s tyranny was possible when they joined their energies together. The energies combined into Shakti, a single mass of incandescent energy, to kill Mahishasura.

A very powerful band of lightning emerged from the mouths of Brahma, Vishnu and Shiva and a young, beautiful female woman with ten hands appeared.

All the Gods gave their special weapons to her. This Shakti coalesced to form the goddess Durga. Riding on a lion, who assisted her, Durga fought Mahishasura. The battle raged for nine days and nights during which Devi Adi Shakti acquired 9 different forms to defeat nine different Asurs. Finally on the tenth day of Ashvin shukla paksha, Mahishasura was defeated and killed by Durga.

That’s why we pray to 9 different forms of DEVI MAA during Dasai.

Maa Shakti as Consort of Lord Shiva, represents two forms of female energy – one mild and protective and the other fierce and destructive.

Mother goddess Sailaputri has a half moon in her forehead; she is mounted on the bullock and holds a lance in her hand.

The first form of Maa Durga among the nine is Sailaputri. She is known as such, because she has incarnated from Himalaya the Emperor of mountains. Mounting a bullock the mother has a lance in her right hand and the lotus flower in the left. She is the first one among the nine aspects of Durga.

In her previous life she took birth from Daksa, the Prajapati as his daughter. Then she was known as Sati.

Once Prajapati Daksa organized a very big sacrificial ceremony in which he invited all gods to receive their sacrificial share. Lord Shiva was the only exception.

When Sati came to know about the festivity arranged by her father, a strong desire arose in her heart to participate in the ceremony. She expressed her desire to Lord Shiva and solicited his permission. Considering all pros and cons Lord Shiva said – ‘Prajapati is displeased with me for the reasons known to him only. He invited in his function all gods and offered their sacrificial share to them. He did not invite me purposely; not even informed me. Under such circumstances it will not be proper for you to go there.’ Sati was not convinced with the piece of advice given by the Lord. The eagerness to see the ceremony and the prospect of seeing the mother and sisters did not subside. The Lord saw that Sati was very keen to go there so he gave her green signal.

A sense of strange joy started waving in her heart. She made necessary preparation and started. But all her enthusiasm subsided like the bubbles the moment she reached there. She found no affection in any eyes except her mother. Only she embraced her. She noticed not even a scintilla of cordiality for her. Not only this she felt a sense of sarcasm and ridicule in what her sisters remarked. She was greatly pained with the insulting attitude of her own relatives. The entire atmosphere was surcharged with a sense of disrespect for Lord Shiva. Daksa passed certain humiliating remarks intended for Lord Shiva. She watched all this and lost her balance. A mental storm made her full of remorse and anger. She repented on having overruled objection by her Lord.

She could not bear the insult of her spouse. Instantly she got her body burnt in the yogic fire, as the body was a gift of Daksa. The news of her demise reached Lord Shiva and he decided to give a good lesson to Daksa. The entire sacrificial canopy along with all paraphernalia was completely destroyed by his lieutenants.

In her next birth she incarnated her as Parvati the daughter of Himalaya and among Nava Durgas she has been referred to as Sailaputri who was again known as Haimavati. According to one of the Upanisadic tales she in her Haimavati aspect defeated all prominent gods.

Like her previous birth in this life also Sailaputri got married with Lord Shiva.

The first and the most prominent among Nava Durgas, Sailaputri is of immense importance and her glories are endless. On the first day of Navratra worship it is she who is worshipped.

In this puja of the first day Yogi’s keep their mind concentrated on Muladhara. This is the starting point of their spiritual discipline.