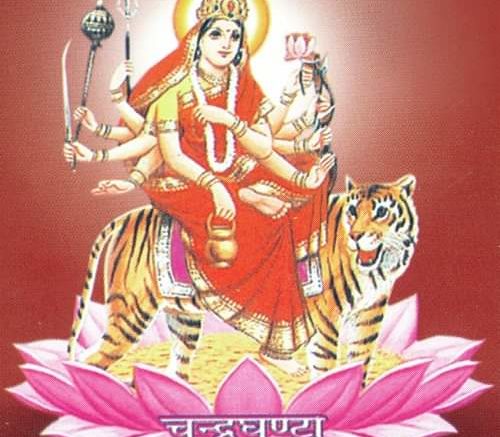 
On the third day of Navaratra, we worship the Vigraha (image) of Maa Chandraghanta. This particular aspect of the Goddess gives extreme peace and provides ultimate good. She has a half moon in her forehead in the shape of a bell. This is why she is called Chandraghanta. The hue of her body is golden bright. She has ten arms. In her ten hands, she holds weapons like sword etc., and missiles like arrow etc. Her vehicle is the lion. She is always in a gesture as if prepared for fighting. Her roaring voice is like a tumultuous sound of a bell that always causes the atrocious Danava, Daitya and Raksasas- all to tremble.

In the Durga worship of Navaratra the third day worship is of great importance. This day the mind of the striver enters Manipura Chakra. At this stage by the grace of mother Chandraghanta he becomes capable of seeing unearthly and divine things. He smells the divine fragrance and many types of divine sound become audible to him. On this day and in this stage of discipline the striver is required to be most careful.

By the grace of Mother Chandraghanta all the sins of the striver are burnt up and obstacles removed. Her worship is instantly fruitful. She is always in a gesture as if ready to proceed for the battlefield and thus she removes the difficulties of devotees very promptly. Her vehicle is lion and so her worshipper becomes valorous and fearless like a lion. The sound of her bell always protects her devotees from evil spirits. As soon as the striver invokes her, her bell immediately becomes active and starts ringing to protect the devotee under her shelter.

Even though she keeps her always busy in killing and suppressing the wicked, yet to her devotees and worshippers she looks most serene, gentle and peaceful. A very good quality that is developed in her devotees, who worship her, is the striver cultivates bravery and fearlessness accompanied by serenity and humility. His face, eyes and the entire body get effulgent. His voice becomes divinely sweet. Wherever the devotee worshippers of mother Chandraghanta go, they disperse peace and blessings among the people. From the body of such a striver there always takes place an invisible radiation of divinely lighted atoms. The divine action is beyond the perceiving capacity of physical eyes but the striver himself and his associates go on experiencing this fact every now and then.

By purifying his mind, words, deeds and body through prescribed manner we should worship the mother Chandraghanta and take shelter under her feet. Through worshipping her we can get rid of all worldly sorrows, and attain the supreme goal spontaneously. She protects her devotees and fills bravery, courage and fearlessness along with patience, calmness and humbleness to them. Her soothing looks take away all sorrows and pain of her devotees

We should always try to advance on the path of spiritual discipline by contemplating on the sacred image of the mother. Contemplating on her, we can attain the mundane perfection and ultimate good in the other world.

On the 5th Day of Durga Puja – We Pray to Skandamata