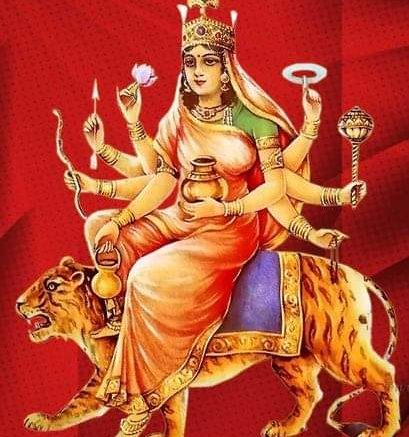 
(Ku+Usma+Anda) – that is how the word has been derived. ‘Ku’ means ‘a little’; ‘Usma’ is warmth, heat or energy and ‘Anda’ means the cosmic egg or universe. That is from whose fraction of warmth the universe has emanated. So she is justifiably named Kusmanda.

When there was only a void full of darkness, at that time, when even time was not there, the mother Kusmanda created the universe with her Sankalpa as a mental projection. Before her advent there was neither Sat nor Asat.

She has her abode in the inner portion of Surya-Loka. Only she could live there and no one else. The hue and luster of her body also is just like that of the Sun glowing and effulgent, incomparable with any other god or goddess-herself being her own match. All the ten quarters are illuminated with her effulgence. Whatever brilliance is observed in the world-in living beings or objects is simply a reflection of her splendor.

She has eight arms. So Astbhuja the name. In her seven hands she holds Kamandalu, bow, arrow, lotus, a jar of nectar, discus, mace, respectively. In her eighth hand there is rosary capable of giving eight Siddhis and nine Nidhis. Her vehicle is lion. Kusmanda in Sanskrit stands for pumpkin, which she likes most as a sacrificial offer. So also she is Kusmanda.

On the fourth day of Navratra, Kusmanda is worshipped. This day the mind of the striver enters and stays in Anahata Cakra. So the striver is required to meditate on this aspect of the Mother with a steady mind and worship her single-mindedly. As a result of her worship the devotees get rid of all ailments and sorrows. The life span, name, strength and health are on the increase. The mother Kusmanda is easy to propitiate. If some body surrenders before her guilelessly, he is sure to reach her Supreme abode.

We should worship her in befitting manner prescribed in the Sastras and be a true devotee of her. Later on the striver has unearthly perceptions and he feels her grace. This miserable world transforms for him into a divine place. Her worship is the best and easiest means to cross the mire of the world. So an aspirant should worship her for his mundane as well as spiritual success.

Running Past COVID in Darjeeling