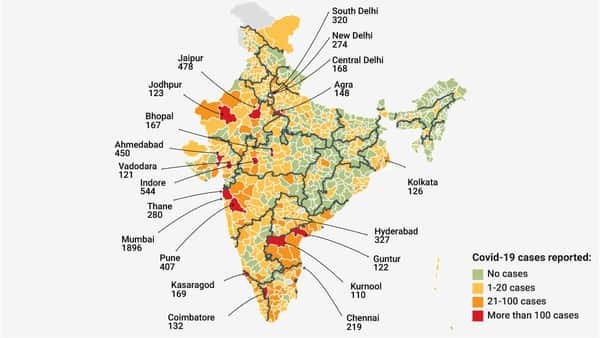 This is precisely the news headline that has kept Sikkim’s count on COVID19 positive case Zero till now, while other states of India are fighting hard to bring down their numbers. In fact, the Sikkim Government was one of the first states to announce complete lockdown of all state borders to prevent anyone from entering or leaving the state.

The Northeast, in general, has been able to contain the spread of COVID19 and have a relatively low number of cases. Early measures taken by the states have so far been effective in keeping the virus at bay. Given the fact that the region shares borders with China, the states took extra precautionary measures along the borders. The exact time and date of the origin of COVID-19 epidemic are still unclear. However, it is believed that a 55-year old Chinese from Wuhan in Hubei province could have been the first person to have contracted the viral infection in mid-November, 2019.  In India, a student from Kerala was the first COVID-19 case to test positive in January 2020. The government of India announced a nationwide shutdown on the 22nd of March by suspending all incoming and outgoing passenger airlines, train services, and public movements.

The COVID-19 pandemic is arguably the most disruptive global event in recent times. We still don’t know the extent of damages by the COVID-19 virus on our socio-economic spheres. However, in all likelihood, the COVID19 crisis will certainly be a defining moment for the entire human society, not just in terms of the economic losses, but the very foundation of our existence – lifestyle, food habits, hygiene, and social interaction.

As the lockdown was announced by the Prime Minister, many localities across the Northeast had set up their barricades at the entry and exit points to restrict the movement of people in their localities. Perhaps the numerous strikes and lockdowns we have due to political disturbances in the region had provided the much-need preparedness and discipline for the lockdown.

Local clubs and volunteers organizations ensure that their localities are sanitized and emergency assistance is rendered to those in need. Public announcements and awareness were relayed to the people using microphones at churches, temples, and community centres.

While the size and less population of these states may have been an advantage for the northeastern states, the strict implementation and adherence to lockdown measure by the people is no less critical. Unlike the rest of the country, where violation of lockdown was even portrayed as a heroic act or rebellion against the government, the people of northeast already knew what is best for them.

Given the remoteness of the region and the logistic challenges, any outbreak of COVID-19 cases here can lead to a catastrophic scenario. In such circumstances, the far-sightedness and efforts of the citizens must be appreciated in making the lockdown a success. While the preparedness of the government is laudable, the most critical role of breaking the chain of virus transmission is fully credited to the people.

And the Results are Showing

Sikkim has not recorded a single COVID19 case so far. Manipur reported two incidents and both patients were cured and discharged from the hospital. Mizoram, Arunachal, and Nagaland reported one case each, and Tripura has two reported cases. Assam, with over 35 positive cases is the hardest hit among the northeastern states.

Today, the state governments of Sikkim, Manipur, Meghalaya, Assam, Arunachal Pradesh are not just helping those who are living in the state but also those students and people who are living outside the states and are facing difficulties during the lockdown period. The government has been distributing rice and even transferring money to the stranded through Direct Beneficiary Transfer system.

While the Northeastern states have kept the virus at bay within their territories, people from the region living outside in cities like Mumbai, Delhi, Bangalore, Hyderabad, and other cities had to face racial slurs, abuses, and called ‘coronavirus’. In Mumbai and Delhi, there were cases of Northeastern people spat in public and abused just because they have mongoloid features like the Chinese.

Thankfully, the Ministry of Home issues a timely notification and directed the concerned state police authorities to ensure that immediate and strict action be taken any such cases of racism.

While Sikkim has become a model state in preventing the spread of coronavirus, it is surprising that next-door Kalimpong which shares similar geography and border was declared a hotspot for COVID19.

When Sikkim and Bhutan shut their borders, tourists flocking to these places diverted to Darjeeling hills instead. Business went on as usual in Darjeeling hills, Terai, and Dooars with tourists and visitors continuously flowing into the region even when the neighbouring Sikkim and Bhutan remained closed. It was only when the local media started reporting the unchecked flow of tourist that the administration reluctantly initiated action due to the public pressure.

One major disadvantage for Darjeeling hills, Terai and Dooars are that the decisions impacting the region are made 600 km away in Kolkata. The local Gorkhaland Territorial Administration (GTA), despite all their good intentions could not effectively control the situation at an early stage because the order had to be issued from Kolkata. As a semi-autonomous body functioning under the state government, GTA officials cannot take any action without due permission from Nabanna. For example, while the GTA wanted the tea gardens to be completely shut during the lockdown, orders from Kolkata allowed partial functioning of the garden activities.  GTA had no option but to toe the line of the Kolkata, despite wanting just the opposite. The absence of local decision-making authority with the GTA has created a loophole in governance as every decision needs to be vetted from Kolkata. This was true even when Bimal Gurung and Co. were leading this body.

In an ideal scenario, the Darjeeling Hills, Terai, and Dooars region could have possibly acted timely if the decision making authority was localized, instead of having to wait for a nod from Kolkata. The region shares more in common with the Northeast than with rest of Bengal in terms of the culture, lifestyle, and geography. Perhaps, the COVID19 episode could be an eye-opener that the region could be better managed as s part of the Northeast council.

Though Coronavirus has presented the world our biggest challenge, there is also an opportunity for the entire world to restart, reimagine and rebuild our future. I am hopeful that as an individual and a nation, our country will surge ahead with a different set of priorities and goals, then what previously defined us.

It is high time for our nation to acknowledge and learn from North East on sustainable living and how to be in harmony with nature.