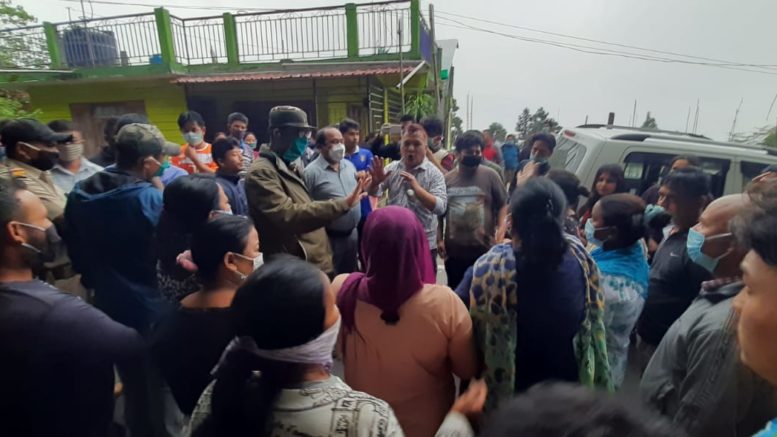 Locals and Police faceoff in Kalimpong


During this formidable COVID-19 crisis, Kalimpong, a small town in the foothills of Eastern Himalaya became an unexpected hotspot. Kalimpong’s infamous and unfortunate COVID-19 victim, 49-years-old Sunita Devi Singh, who had travelled from Chennai, ended up passing the infection on to 15 other individuals before she herself succumbed in a hospital in Siliguri. Following her death and this “one” spike of infections, Kalimpong was quickly dubbed as a “COVID-19 hotspot” in print, electronic and social media; and later on, declared a “red zone” by the Central Government. It was completely cordoned and all travel in and out of this small mountain town was restricted, unless for exceptional situations. However, in a typical “business as usual” style, the administration went out of its way to disregard its own mandated lockdown measures and regulations for a VIP from Kolkata, let’s call her Madam. Madam was recently provided over the board support by the State administration, which broke its own red-tape rules for her travel from Kolkata to Kalimpong on 15th May 2020.

But why was Madam travelling during this COVID-19 lockdown? Here is where the story exposes the ugly face of the connections between India’s rich, famous and powerful and the state. Madam as it turns out rents a house in Kalimpong. When the COVID-19 crisis started in early March, she and her daughter decided to leave for Kolkata, but they did so, after locking up a 65-years-old domestic help from the plains in the house – albeit with some food and other basic supplies. The domestic help was allegedly told, ‘we will be back in a week’.

When the lockdown continued for over 50 days, Madam did not think it inhuman to keep the elderly domestic help in a house locked in. She had left behind limited food supplies and had tasked her local landlord to deliver food supplies, if necessary. All this was being done as for a jail inmate – food squeezed in through the window grills. Eventually, the elderly lady stressed by days of being locked in and alone and having to rely on what the local landlord was delivering as food through the windows, raised a cry for help, shouting through the windows – attracting the attention of the immediate neighbours and the rest of the villagers.

Imagine a 65-year-old elderly woman living in a house locked from outside for almost 50 days. Such grotesque situations happen with relative ease in India, where domestic helps – young and old lack the agency to question or challenge such inhuman behaviour. Was this elderly lady lured with a few hundred rupees more, was she coerced into silence, as she told lies that they would return – none of this matters. What matters is the impunity with which such injustices and indignities happen in modern India. This old woman was a jailed-chowkidar, locked from the outside to guard her Madam’s valuables in a rented house – neither fully trusted to guard the vacant house as a “free” individual – able to move in and out of the house, nor considered worthy enough to travel with the mother-daughter duo to Kolkata when the lockdown was imposed.

I was told by some of the locals that providing the maid with food was an arduous task due to the small open spaces in between the metallic grills on the window. It is ironical that she might never complain nor see any wrong-doing in her treatment by her employer – such is the influence of power over the marginalized and powerless. Who knows, she might even toe the line of her Madam and parrot what Madam’s claims. When Madam in Kolkata, heard that her domestic help had alerted local residents, she approached relevant authorities – something it appears, she could do with relative ease, and could have done days before.

As it turns out, Madam is a powerful serial offender. She had coerced her landlord into renting the house. She rarely pays her rent on time and takes undue advantage in demanding tasks of her landlord. She does this because she flagrantly “boasts” of her network and connections in Kalimpong as well as in Kolkata – to the who and who’s in State/District administration and in the political circuits. So fearful is the homeowner of his tenant that even a simple phone conversation with her, makes him nervous and shaky. It took this man enormous strength to acquiesce to the pressures of the villagers to communicate to his tenant in Kolkata to intervene to rescue the domestic help. As soon as he had made this call to Madam, he received a call from a high ranking “Officer” in Kalimpong, asserting that the women’s claims were “false” and that the house keys had been left behind. Even if this was true, which it was not, this is an ironic twist – leaving the keys of a door locked from the outside to the inmate locked inside.

So how did I come to know of this story? In Kalimpong, the local community was aghast at this situation and collectively put pressure on the district administration demanding immediate intervention. This happened as Madam was hurriedly rushing back to Kalimpong with her daughter – facilitated by travel paperwork that came all the way from the Chief Minister’s Office (as claimed by a high ranking “Officer” during the altercation with the villagers on 16th May 2020). When Madam and her daughter sneaked back to their home in Kalimpong ignoring the mandatory institutional quarantine protocol at a designated quarantine center in Kalimpong – the locals were hugely distressed. After all, a woman travelling from Chennai had managed to infect 15 people and push the town into strict lockdown, so everyone feared, and still fears the consequences of being infected. When she was back, Madam clarified to her landlord, that she had not come back to “ease” her domestic help’s fears and distress, rather it was to ensure the safety of her personal belongings, in the event that the locals managed to break into the house.

When the local community asked her and her daughter to follow the quarantine rules, she resorted once again to her powerful connections, constantly reiterating her links to the who and who’s in the district administration. Infuriated and also driven by the fear of morbidity and mortality, the locals ring-fenced the house demanding that the local administration follow its own rules, i.e. send the mother-daughter duo to the designated quarantine center for 14 days.

The administration in typical style came to Madam’s defense. Officers from the local police, administration department arrived on the spot one after the other, argued with the locals on behalf of this powerful VIP, explaining that she had a letter from the CMO, a COVID-19 negative certificate from a private hospital in Kolkata and that she be allowed home quarantine. Whether these documents were indeed produced and shared by the Police with the villagers remains doubtful. When the locals refused to budge from their demand for institutional quarantine for the mother-daughter duo at any “designated quarantine center” in Kalimpong, the Police and health authorities eventually escorted them out to the local administration (GTA) guesthouse in the most scenic part of the town at Delo. A mere eyewash, this tourist lodge was neither a designated quarantine center nor did it have any medical provisions and the health staffs to monitor these VIPs. In all of this vulgar display of power and politics, the issue of an elderly woman being locked up all alone for over 50 days – was conveniently forgotten. And in this bizarre series of unfortunate events, the domestic help too was whisked away along with her Madam to Delo, exposing her to high risk from the mother and daughter. The “what-if” question makes me shudder. Will the guilty for this heinous crime be punished, how and when? Madam had no fears, as she left, she mockingly told the locals, “see you soon”.

And indeed we will see the likes of Madam soon and often, in Kalimpong and all over this scenic landscape – which has become the playground of the rich, famous, powerful and politically connected. This is what we had long argued and contested against, and this is what subsequent administrations at state and local levels have and continue to carefully protect and preserve. This incidence reminds us once again of the rhetoric of democracy and representation. However, we are also reminded that we have thankfully, in this case, been human – the villagers raised their voice for the hapless 65-year-old domestic help. It sends out a powerful message for the change we must continue to struggle for – for democratic and transparent governance.

But this has not come without any cost – cost being the threat of punishment and(or)victimization of those who came forward to highlight this issue and demand accountability from Madam. Many already fear that inquiry, identification and background checks by the Police and(or) district administration on those who challenged Madam and the powerful bureaucrats have discreetly begun. While a certain kind of fear psychosis is gripping the well-meaning villagers over the inquiry rumors, Madam has returned home after her quick 4 days stint at Delo two days ago. And perhaps, the powerplay (of political and bureaucratic patronage) and domination of Madam on the less powerful, powerless and on those who dared to raise their voice will continue via her networks that run all the way from Kalimpong to Kolkata. I can only hope and pray that the people of Kalimpong will stand up en-mass and come to the rescue/support of the villagers, now under scrutiny from the district administration.

This article is published orginally in Sikkim Express.

1 Comment on "COVID-19, Kalimpong and The Play of Power and Politics"