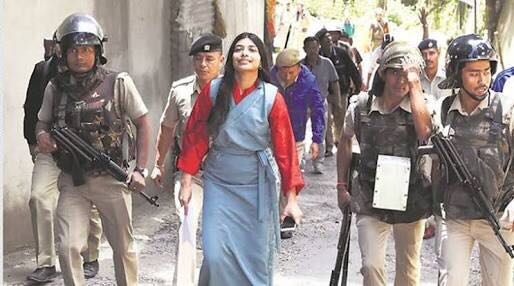 The (re)clarification and (re)assurances that are being frantically articulated – which apparently have picked up pace on “social media” by our very office bearers “on behalf of the State Government” (link ) not only lacks in-depth contextual understanding of the ground realities regarding the local/public concerns against the Bengali language imposition in the Hills (despite being based in the Hills and being direct observers) but it clearly appears as an attempt to POLITICIZE genuine local concerns and divert this issue under the dangerous veil/garb of “communal disharmony”.

Being born and raised in this region, “hatred and communal disharmony” is something I have NOT yet heard of, experienced nor witnessed in the Hills. Yes, we have had violent agitations/resistances against the State Government for our demand for Gorkhaland but even then (and now), our struggles have never had any “communal” under/overtone. De-constructing the statements by our respected District Magistrate and Superintendent of Police to understand its implications on us – the locals/public – as well as our future generations, leave me perplexed and fearful.

The above statement exhibits either a classic case of changing narratives; particularly by those in powerful positions by distorting facts or by creating new facts; or it is a classic case of being absolutely ignorant of the ground realities, events and thereby facts. Local concerns have revolved only around the imposition of Bengali as a compulsory language in the school curriculum. These concerns arose not because Nepali/Gorkhabhasa would be replaced (as assumed by our DM) but because top-down imposition of any policy or plans or even proposals, particularly on sensitive, crucial issues such as language (culture, religion, etc.) goes against our fundament right and freedom to choose. Forget about empathy and(or) even solidarity with the locals whose interests these “law and order maintainers” ought to be safeguarding, here in the Hills, even the basic understanding of what the locals are upset about seems to be absent in our officials.

Perhaps this is what happens when Officers are deputed from outside of their home state or region. In their zeal to efficiently perform their duties and responsibilities, they inadvertently forget those they are actually meant to serve – the people. Their limited years of service in one area and subsequent transfer to another leaves them in a limbo where they are unable to imbue the contextual complexities, the history of the place and people and the issues that plague the place and the people. Perhaps if the new DM would have really taken pains to go through the past instances of systematic language appropriation and imposition, s/h would see a pattern that screams at the “PROCEDURAL INJUSTICE” being meted out to the people of the hills.

However, it is our two-year-old SP who has really astounded me.

SP: “There is room for democratic protest. There is space for freedom of expression but there is no scope for lawlessness, hatred and communal disharmony. People from all walks of life, community and religion visit Darjeeling as tourists. It is our interest to ensure peace and see that all are respected. We will not allow spreading communal disharmony, hatred and lawlessness.”

Now, THIS is another classic case of “putting the word(s) in mouth”. Words such as “hatred”, “communal disharmony”, “lawlessness” coming from our SP who has been in Darjeeling for two years (living among us), in a position that gives not only authority but also legitimacy to anything s/h claims or says reminds me of the movie INCEPTION where the protagonist seeds ideas in people’s minds through dreams. Well, it sounds absurd but the reality in the Hills is not much different from that of the movie. Could these words be an inception of a kind to give people an idea – a wrong one though – on the lines of communal disharmony, hatred and lawlessness. Could such use of words by our SP have an unintended outcome in actually perpetuating and(or) probably creating such situations by giving ideas? Could these words lead to “manufactured” lawlessness? Or could these strong words be some “jargon” thrown by her in the wake of people’s protests in safeguarding their fundamental right to choose, the right to decide, to right to speak, and above all the right to REACT?

SEE ALSO:  Indeed “A Tragedy In The Making”: Merger With Sikkim Will Do More Injustice To Darjeeling, Her People And Her Decades Of Struggle
Powered by Inline Related Posts

Till date, there has been no fracture, lawlessness or disharmony amongst our hill “Gorkha” (for the meaning please check the link) communities on COMMUNAL lines… This is not to say we don’t have our internal struggles based on ethnicity, party politics, boards but definitely NOT COMMUNAL. So in suggesting or implying that our concerns, protests and resistance against the tactful imposition of Bengali first as compulsory language and now as compulsory optional language could create “lawlessness”, “hatred” and “communal disharmony” perhaps is a reflection of not what happening on the ground but a reflection of what one wants to PROJECT, possibly for the higher powers. God Save us from such dangerous ideas and narratives.

The current state of affairs in the Hills is thus PUZZLING and extremely DISMAL where our protectors (law and order) on one hand are delegitimizing our worries, our concerns, our angst, our unhappiness at the proposed Bengali language imposition by giving it a communal connotation and(or) brushing it aside as rumors (which in a way is stifling of our VOICES); while on the other makings claims of democratic space to protest. I cannot help but observe that their statements are as oxymoronic as Didi’s vision of imposing Bengali as optional-compulsory third language.

As I end this piece here, I recall what Gokhale has once remarked about Bengal: “What Bengal thinks today, India thinks tomorrow.” Indeed no one can deny their foresight and their intellectual and political acumen. This is why GOING BEYOND this language imposition, I fearfully wonder, if the language imposition of today is only a longterm, well thought of, planned political strategy to delegitimize the demand for Gorkhaland tomorrow simply on the grounds of LANGUAGE. Could they be this foresighted? I guess, only time can answer my question.

1 Comment on "Misplaced Concerns Or Just Another “Political” Strategy Via The Non-Political?"