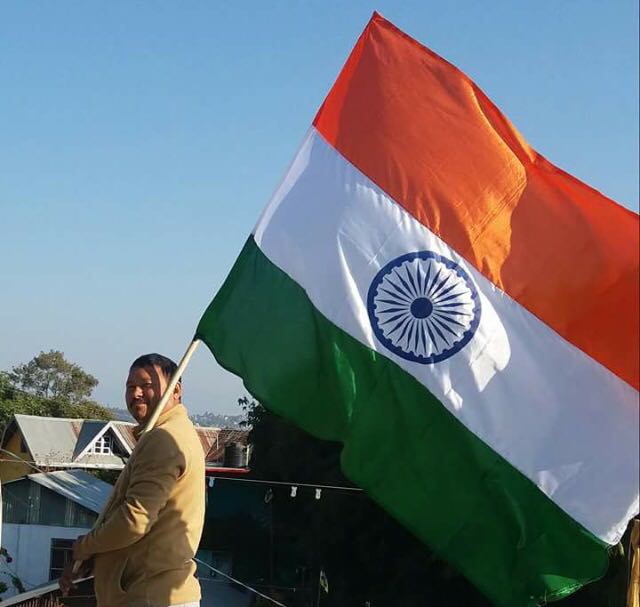 Gorkhaland Saheed Barun Bhujel, an elected people's representative and Kalimpong Municipality Councillor who was killed, while in police custody.

“They who can give up essential liberty to obtain a little temporary safety, deserve neither liberty nor safety.”

Today as we celebrate our 72nd Republic Day, let us take a moment to remember all the brave hearts and their family members who have laid down their lives in gaining our Independence, in protecting our freedom, and aspirations of dignity, equality, and justice within our nation. Let us take a moment to remember the family members of all the serving personnel who are associated with our nation’s security and defence services.

On this day in 1950, our founding fathers gifted us a written Constitution – one that remains supreme, providing direction to our nation and to us. This one document privileges and entitles us to speak out against injustice and demand freedom against any form of oppression, inequality, tyranny and injustice. In short, it basically inspires us to aspire for something much higher, much nobler, much better and much greater than the sum of ourselves.

While we have come far since the drafting and implementation of our constitution, our nation building process still is incomplete, as there are sections of this great nation – like us Gorkhas, who are yet to live the promise that Independent India guaranteed and envisioned for her citizens. 72 years into our own constitution, even to this day, we – the Gorkhas are forced to live a discriminated and marginalized lives – most of all a life with dignity.

Every time we have aspired to live by and execute our constitutional rights and freedom that entitles us to demand for a state of our own within the Union of India, we have been labelled time and again as “foreigners”, “immigrants” and “mercenaries” and viewed with contempt and suspicion. The Chief Minister of West Bengal Mamata Banerjee has gone a step further and added to these list of insults by labelling us as “terrorists.” But despite such taunts and labels, our patriotism and dedication to our nation remains unshaken, unwavered and uncontested.

Perhaps, it is now time to ask of our nation certain fundamental rights and duties as enshrined in our constitution, to be exercised with honour for the Gorkha community of Darjeeling, Dooars and Terai in fulfilling their century old aspiration of separation from the tyrannical regime under Waste Bengal and have a state of their own.

The right to demand a state of our own – is entitled by Article 3 of our constitution, which allows for the formation of a new state. For Bengal to label everyone who has supported the demand of Gorkhaland as being seditious, including our movement as being secessionist is not only wrong, but also against the spirit of our constitution.

The right to equality – is ensured under Article 15 of our constitution, which decrees that no person shall be discriminated on the basis of religion, race, caste, sex or place of birth. However, in Bengal – those who are loyal to the Gorkhaland cause are being hounded, yet those who have pledged their loyalty to TMC and its government are given free pass and police protection.

The right to life and personal liberty – is guaranteed by Article 21 of our constitution. Yet hundreds of Gorkhaland supporters are arrested and thrown behind bars for their choices and personal liberty. Hundreds more have been threatened with arrests, and their families are being harassed.

The right to freedom of speech and expression – guaranteed by Article 19(1)(a) of our constitution, which ensures that people have a right to say what they want to in support of their constitutional demand. It permits for reporting of news and dissemination of news. Yet, the Bengal government has in the past imposed ban on internet, local news outlets, and on India’s only digital Nepali news channel – ABN. Truth is, there is a severe scrutiny of any and all posts online and in print and electronic that are favourable to the demand of Gorkhaland.

Multiple cases have been filed against TheDC platform and tea members, some motivated by politics and some by the ego of law enforcement agencies that seem to be incapable of taking criticism. Cases are filed, not to ascertain justice and the due course of law, but to harass us and to brow beat us into remaining silent. But, they won’t succeed. We will continue to tell the truth and write about all injustices, because our constitution guarantees us this freedom.

The right to assemble and protest peacefully – is enabled by Article 19(1) (b) of our constitution, which permits the citizens of this nation to assemble peacefully. But we have seen violent crackdown by the security forces on any such assembly in favour of Gorkhaland statehood. In doing so, Bengal government has taken away one of the fundamental tenants of our constitutionally guaranteed freedoms.

Living under an unfair and unequal regime, our Constitution provides us the only protection, and it is time for the nation to grant Us – Gorkhas, and other marginalized communities like the Bodos, and Tipras – these basic rights enshrined under our constitution, and unless that happens the essence of our freedom, and our republic will keep on getting diluted.

On behalf of TheDC team, we wish you all a very Happy Republic Day… let us all commit to uphold the dignity of our constitution and our nation, but doing our Fundamental Duties, while seeking for our Fundamental Rights.