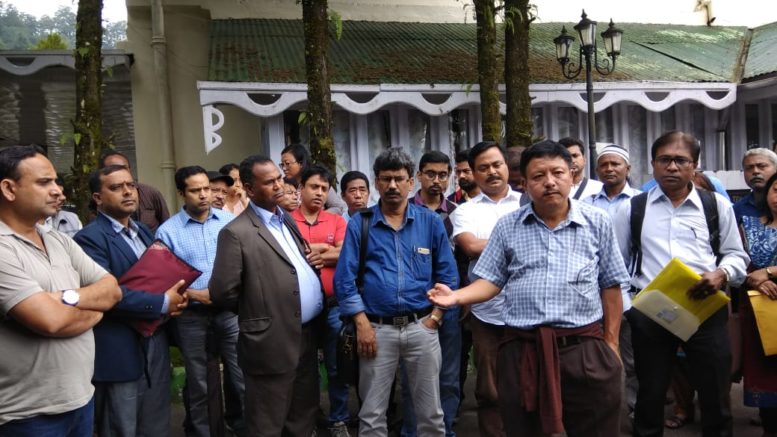 
In a shocker of sorts, it has come to light that the Govt of West Bengal hasn’t paid arrears due to Hill College Professors to the tune of Rs. 2,71,67,825/-. This comprises of various types of arrears such as salary arrears,  promotional arrears and increments for MPhil and PhD.

The Hill College professors have also been not paid the last installment arrears of the Revised UGC Scale of Pay 2006.Though an amount of Rs. 71,05,237/- was reportedly sanctioned in March of 2017 itself.

Moreover, Human Resource Management System which automatizes the various benefits for college Professors which has been applied across rest of West Bengal Health Scheme, Employees Provident Fund Scheme, E-service book, E-Pension etc has not been implemented in the Hills, thus denying the Hill Professors their rightful Benefits

Highlighting all these issues, a delegation comprising of all the Teaching and Non-Teaching Staff of the nine-government aided Hill Colleges under the Gorkhaland Territorial Administration assembled at the Lalkothi Secretariat of the GTA at on August 22nd. They submitted a memorandum to the Principal Secretary, who is also the Drawing and Disbursing Officer of the GTA, detailing the oft reported problems besetting the Hill Colleges and requested a redressal within thirty days.

A discussion that was later described as being fruitful, between the Principal Secretary and the representatives took place during which the various difficulties, problems and deprivation of their legitimate dues as highlited in the memorandum were discussed.

In a Press release, Hill College Professors said, “The immediate and pressing problems which were once again reiterated were the non receipt  of various types of  arrears such as salary arrears,  promotional arrears and increments for MPhil and PhD. These outstanding arrear claims forwarded by the GTA to the Principal Secretary, Higher Education and the Office of the Director of Public Instructions, Government of West Bengal based upon the claim bills submitted by the different Colleges now  stand at a whooping Rs. 2,71,67,825/- . Therefore many members of the Staff remain deprived of their rightful dues.

The employees of the Hill Colleges unlike the rest of Bengal, have still not received the last installment arrears of the Revised UGC Scale of Pay 2006.Though an amount of Rs. 71,05,237/- had been sanctioned to the account of the Principal Secretary, GTA under DDO(Code DAAHAB053) vide Memo No. 2212-Ac dated 06.03.2017, ADPI(A) through TR Form No. 31 with Ref. No. 29160303115256 and Bill No. 399 dated 9/3/2017 put up by the GTA to the Treasury Office, Darjeeling the arrears were not disbursed to the Colleges. Many of the Staff members have since retired and till date still  remain deprived of their legitimate claims.

The Director of Public Instructions, Kolkata vide his Memo No. ED-1591/2016 dated 12/4/2016 had announced the inclusion of all colleges across the state under the Human Resource Management System. This came into effect across the state except in the GTA region. By not initiating HRMS, the GTA has unjustly denied the employees of the Hill Colleges from availing various beneficial schemes like West Bengal Health Scheme, Employees Provident Fund Scheme, E-service book, E-Pension etc.

The Principal Secretary was reminded that the Gorkhaland Territorial Administration Act had included all Hill Colleges  in the GTA. As per Ch II, Art 26(Clause VI) of the GTA Act there was provision for setting up of a Higher Education Cell under the GTA, which would include an officer of the rank of a Jt. Director along with  experienced office staff to handle, documents and process all matters related to the employees under Higher Education. Had the HEC been established, it would have avoided and solved many of the present problems being faced by the employees. The then DPI, Dr. D. R Mandal had assured the Education Director GTA assuring assistance for the establishment of the HEC as per the letter from the Office of the DPI, Memo  No. DO/ED/242/201 dated 5/4/2013 . However till date the HEC has not been established under the GTA.

During the discussion the Principal Secretary, GTA stated that the reason for the delay in the implemention of the HRMS was technical and not  due to policy matters. A large number of other departments under the GTA, also remain a victim to the delay. He assured the representatives that he would look into the matter and try to expedite its implementation.

He told the representatives that he was not aware of the difficulties with regards to the non-disbursement of the Arrears in respect of the Revised UGC scales  of Pay 2006 and would immediately take all neccessary actions for re claiming the returned amount from the Government and disburse them to the Colleges. As regards to the other arrears and claims had been sent to the Principal Secretary , Higher Education, Government of West Bengal and a copy to the Office of the DPI, Government of West Bengal and assured that he would be taking up the issue with the competent authorities during his next visit to Kolkata.

On being informed that a letter had been sent to the GTA from the Hill Affairs for the submission of a proposal for setting up the HEC, he assured that he would enquire with the Education Director ,GTA with regards to the progress and would do whatever was neccessary from its end, but as it was a policy matter, he would take up the issue with the competent authorities.

After the meeting the gathered members of the Staff were briefed of the discussion that took place in the meeting by the representatives who attended the meeting. A team then met the Education Director, GTA at the Lewis Jubilee Complex and had similar disucssions during which they were assured that the matter would be taken up with utomst priority with the competent authorities.

The Staff of the nine Colleges under the GTA are of the hope and firm belief that the difficulties, problems and injustice being faced by them would be immediately redressed within a month’s time. However, if it remains unresolved and delayed they would be forced to seek justice through other avenues. The amicable, peaceful and permanent solution would be in the interest of all stake holders and for the betterment and advancement of Higher Education in the GTA area.”

Be the first to comment on "Hill College Professors Not Paid Arrears to the Tune of Over Rs 2.71 Crores by West Bengal Govt"