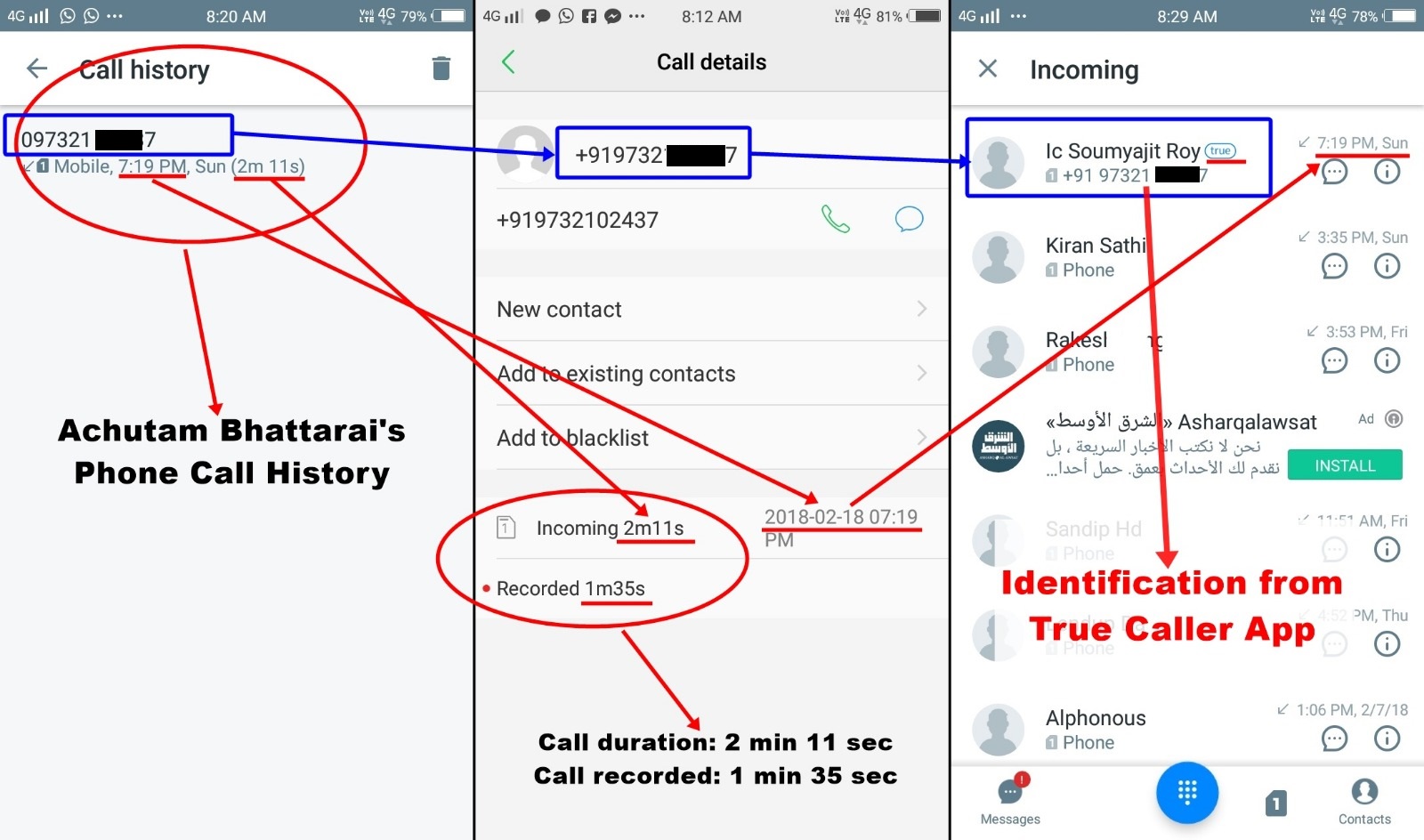 Screenshots sent to us, which purportedly shows the call details of the controversial call

A recorded phone conversation has gone viral in North-Bengal, and has caused widespread anger and resentment in the hills. We have received the said clips from numerous readers of ours, who have demanded to know why we haven’t uploaded the voice clip, or why we haven’t reported on the issue. Unlike other news sites and pages, instead of rushing in to report on the issue, we have always done our best to do our due diligence and report every story with the fullest possible details.

Here is what we have been able to ascertain so far.

According to one Achutam Bhattarai, who sent an email to TheDC, the conversation allegedly took place between him and Mr. Saumyajit Roy the Inspector-in-Charge of Sadar Police Station, Darjeeling.

Here is the transcript, translated verbatim from the audio clip

“VOICE 1: No no, I am not giving any trouble to anyone

VOICE 1: No no… I don’t have any problem bhai

VOICE 2: If you start having too much problem, then your house will also be burned down… ok?

VOICE 1: Will you burn down my house?

VOICE 2: Yes yes… your house could also be burned down… I am telling you straight… ok?

VOICE 2: Whoever I am… I am telling you straight… many homes have been burned down your home too… one one… one unit will be added… allright?

VOICE 1: So are you guys there to burn down houses? or police… we the publicllll

VOICE 1: You cannot… just like this… what language are you using?

VOICE 1: No who are you actually? whats your identity?

VOICE 1: Look, Soumyajit Roy… look… you cannot speak in this language… you are a cop no… you speak like a cop

VOICE 2: All right…. whatever it is… all right? you don’t f**k around… there will be problem… all right?

VOICE 2: You will face problem

Here is the audio:

According to Achutam, the call was allegedly made from the phone number: +91 97321 ***37 at 7:19 PM on February 18th, 2018, and he started to record it only when he got threatened by the person he claims is IC Soumyajit Roy. A screenshot detailing the call and how True Caller App showed the name of the caller as being “Soumyajit Roy” has also been sent to us.

Achutam Bhattarai, the person who was allegedly issued the threat, in turn has mailed a letter to Union Minister of Women and Child Development Maneka Gandhi with a copy to Darjeeling MP SS Ahluwalia stating that the police officer called and threatened him for supporting statehood for Gorkhaland.

The letter, a copy of which has been sent to TheDC via email reads,

I am writing to you in grave distress, in the hopes that you will kindly provide my mother and sister protection, as Darjeeling Police Inspector-in-Charge Saumyajit Roy has threatened to rape them.

Maam, I support the demand for Gorkhaland, because of which West Bengal Police has threatened me repeatedly. However, to my utter shock and horror the IC of Darjeeling Sadar Police Station Soumijit Roy called me personally and threatened to burn down my house. When I told him that he was speaking like a goon, he threatened to rape my mother and sister.

Maam, to threaten my mother and sister with rape is going lower than the lowest anyone can fall to, and also reflects the utter disdain in which women are held in West Bengal.

Mam, my family has always looked upto you as an inspiration, especially my mother who drew inspiration from your constant assertion of women’s strength and power. I am writing to you, not just as a citizen of our nation, but also as a brother and a son, who is not in a position to provide any protection to them.

Following this, we tried to reach out to IC Roy for comments, but his phone couldn’t be reached. However, one of our contributors reached out to him on Facebook, and asked “As per the viral message going on in Facebook we can hear you threatening to burn down the house and rape the women. Is this true? Is this your voice?”

To which Mr. Roy has responded, “It’s nonsense stuff, I heard it too… Not my voice… I can’t speak proper Hindi.” IC claims its not his voice

Responding to the audio clip, Farmer’s organisation Kalimpong Krishak Kalyan Sangathan has threatened to launch an agitation and a transport strike from March 14 if Soumyajit Roy was not suspended and a judicial probe was not ordered into the incident. While the ordinary public are outraging online, majority of the politicians have chosen to skirt clear from the issue, and haven’t reacted to it. However, two of the most important political figures from Darjeeling – the current Chairman of the GTA Board of Administrators Mr. Binoy Tamang has issued a press statement yesterday, it reads…

Meanwhile GJM President Bimal Gurung has also reacted to the issue, and released a press note which reads…

“As a leader of the Gorkha community, I condole the death of democracy in the Hill, Terai and Dooars region.

Even after killing so many innocent Gorkha youths, the West Bengal Police have continued to unleash a reign of terror in the Darjeeling, Kalimpong, and Dooars region.

The audio recording that has gone viral today, provides a very small glimpse into how those loyal to Gorkhaland cause are being treated in West Bengal.

In a state run by a woman Chief Minister, her police have the audacity and brazenness to threaten someone’s mother and sister with rape.

Since 1986 Gorkhaland agitation, numerous sisters, daughters and mothers have been raped by Bengal police, and what the Inspector-in-Charge of the Darjeeling Sadar police station Soumyajit Roy is saying in the audio is reflective of their mentality and how they operate to silence the voices that seek freedom from these tyrants.

If you listen to the tape carefully, the IC has confessed ‘bahut ghar jalaya’, this statement shows who has unleashed real terror in our hills. I therefore will be writing to the Home Minister and the Hon’ble Prime Minister asking for a Supreme Court monitored NIA and CBI inquiry into all instances of arson and violence spread in our hills.

I strongly believe in our national motto – Satyameva Jayate. I have faith that the truth will always triumph, and despite all attempts at muddying the water, the real face of West Bengal government and their police force has been exposed.

I extend my solidarity and support to the beleaguered family, and request every self-respecting Gorkhey janta to stand with them, as tomorrow it could be one of us who may be at the receiving end of such state sponsored threats of terror.” [sic] As the hills seethe with anger, and there is mass confusion, we request our readers to kindly await for the law to take its course.

On the 8th year of being born – What TheDC means to us?