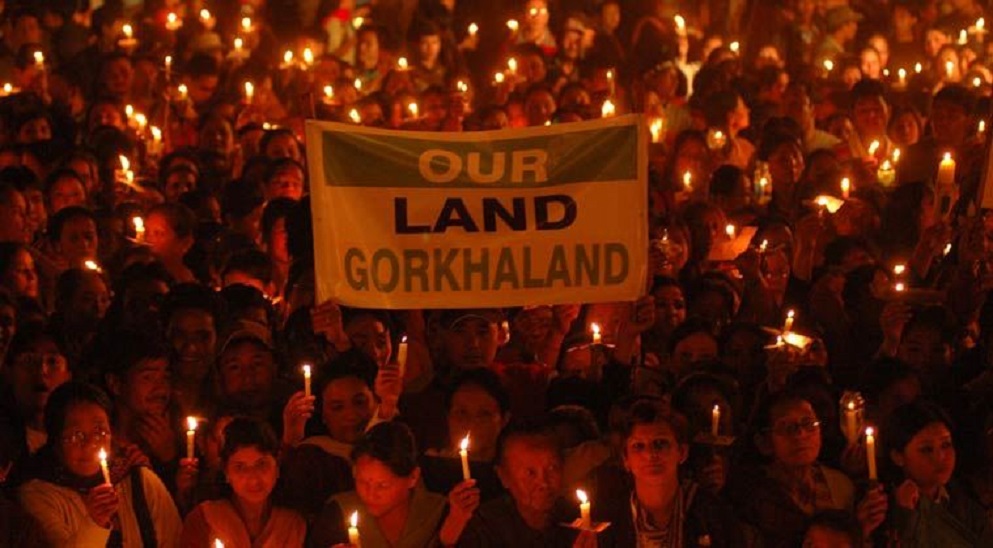 
Often described as the Queen of the Hills for its stunning natural beauty, complemented by the world-famous and UNESCO world heritage – the Himalayan Railway, also holding an intoxicating political history the Darjeeling hills does not fail to mesmerize the tourists as well as the scholars. It is sad but not surprising that the Queen of the Himalayas has always been a victim of political betrayal (Dhoka) and there is neither a “ Queen” like leader, nor a permanent “Hills” like solution to achieve its true potentials.

The opening chapter in the winner of the fictional 2006 man booker prize ’The inheritance of Loss’  by Kiran Desai tells the correct political history of the Darjeeling hills – “A great amount of warring, betraying, bartering had occurred; between Nepal, England, Tibet, India, Sikkim, Bhutan, Darjeeling stolen from here, Kalimpong plucked from there making ridiculous the drawing of  the borders.” Such a political history led to the political uncertainty and identity crisis amongst the Nepali speaking (Gorkha) Indian citizens that fueled the demand for a separate state of Gorkhaland since 1907.

The chronological series of the demand for statehood is as under

1907 – The first demand for Gorkhaland was submitted to the British government and the government of Independent India for separation from Bengal.

1952 – The All-India Gorkha League submits a memorandum to then Prime Minister Jawaharlal Nehru demanding separation from the state of Bengal.

1955 – A demand for creation of separate state consisting of Darjeeling, Jalpaiguri and Cooch Behar district was submitted to the State Reorganization Committee.

1977- 81 – The West Bengal government passes a resolution supporting the creation of an autonomous district council consisting of Darjeeling and related areas. In 1981, the then Prime Minister Indira Gandhi receives a memorandum demanding a separate state.

1980-90 – The demand for Gorkhaland was intensified in the 1980s under the leadership of Gorkha National Liberation Front (GNLF) leader late Subhash Ghisingh. After two-year-long violent protests and countless strikes, the Darjeeling Gorkha Hill Council (DGHC) was formed in 1988.

2009 General Elections – The GJM offered its support to BJP and Jaswant Singh the former union minister of finance, external affairs and defence after the BJP pledged to help create Gorkhaland. BJP won the seat and opened its account in  West Bengal but Gorkha Land never happened.

2013 – The demand for separation rose again due to the division of Andhra Pradesh peacefully under the leadership of GJM.

2014 General elections – Veteran politician and National Vice President of BJP, Surinderjeet Singh Ahluwalia wins Darjeeling with the support of GJM. GJM supported BJP after it made a changed its Lok Sabha poll manifesto mentioning that it will “sympathetically examine and appropriately consider the long-pending demands of the Gorkhas” but Gorkha Land never happened.

2017 – The Mamta Banerjee led Trinamool Congress West Bengal government’s decision to impose Bengali language in all the schools from Class I-IX in June 2017, sparks unrest. The GJM reacted by demanding full statehood for the northern hill areas of Bengal, including Terai and Dooars regions and staged 104 days of strike that paralyzed life.

2019 General Elections – For the first time in three decades, the call for a separate Gorkhaland state does not become a poll issue in the hills. Instead, minimum wages for tea workers, potable water, electricity, education and employment and restoration of democracy forms the major election issue. BJP MP Raju Bista won the seat.

2021 West Bengal Assembly Elections – GJM feels betrayed by BJP and its statehood promises of the past and decides to join the Mamta Banerjee led Trinamool Congress to keep out BJP from the hills and the region becomes a mud slinging political  field and between the regional parties and their leaders threatening the fragile peace and slow development of the region.

The above facts prove that and the Queen of Hills has and exploited by all parties for their vested interest and the 114 years long and painful  GorkhaLand dream and future of Darjeeling looks more like that of a Dhoka Land as young people have lost hope on their leaders as well for a bright future.

Queen of the hills, Darjeeling deserves to be better politically, strategically as well as economically. She has immense potential in terms of climate and enterprising and friendly people to nourish its soul through tourism, tea and timber. The location of the district bordering Nepal, Bangladesh and  Bhutan at the sensitive Siliguri corridor makes it a very important and strategic district in India. It cannot afford to be political fodder for centuries and a showpiece of failed promises and an avenue for exploitation. One option to solve the century-old issue is by making it the 9th union territory of the Republic of India in consultation with all the parties and public of the region. Such a step might help to achieve its true potential and reinforce India’s security concerns. The merits of Darjeeling being a union territory would be:

It will have lower taxes or no taxes in some cases as compared to the states.  This will benefit most people as essential commodities like cars, fuel and may others will be cheaper. It will help to heal the decades-old economic stagnation.

It will be directly under the control of the Central government.  This will end the political betrayal both by national and local parties and their so-called sympathetic leaders and their manifestos. Above all, this will reinforce India’s strategic and defence interests for all times to come. For centuries the brave Gorkha soldiers of Darjeeling hills have given their blood and life for India. It is time India explores viable options like this and gives them the status of the next union territory status and make Darjeeling hills the Queen of Development and Prosperity and not leave it as a century-old  Inheritance of Loss in the real world.

The parties and politics have failed Darjeeling Hills. Can the  young generation take the lead now?