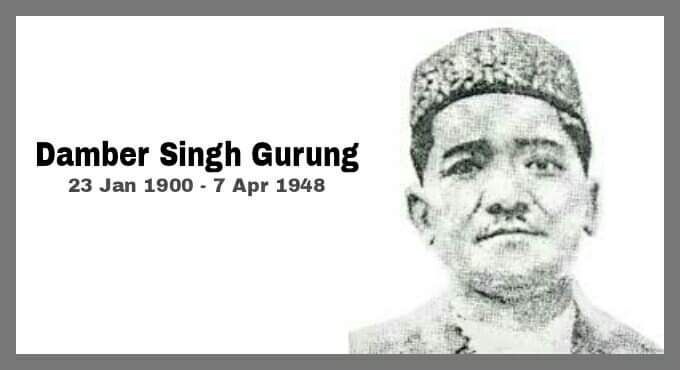 
Damber Singh Gurung was the only Gorkha in the nation’s Constituent Assembly, which was setup to draft the Constitution of Independent India. It is in his name that Kalimpong’s famous Damber Chowk has been named… Yet there was no commemoration of his birth anniversary

Damber Singh Gurung (Nepali: डम्बर सिंह गुरुङ) was a politician, lawyer and social worker of the Indian Gorkha community. He founded the Akhil Bharatiya Gorkha League, a political party, in 1943. DS Gurung represented the Indian Gorkha community in the Constituent Assembly of India till his death in 1948, after which Ari Bahadur Gurung took his place

Sadly even the party he founded – Akhil Bharatiya Gorkha League forgot to celebrate his birthday.

Reminding us of this the page Indian Gorkhas write

“Great, that Netaji’s birthday was observed in Darjeeling, coincidentally today is also the birthday of Damber Singh Gurung A Gorkha in the Constituent Assembly. However, we did not find any kind of event organised4 by the concerned Gorkha body or administration any where in Darjeeling … WAKE UP #GORKHAS!!”

Damber Singh Gurung gave numerous speeches on the floor of the Constituent Assembly expressing the problems and aspirations of the Gorkhas all over the nation besides taking active part in the formulation of the Constitution of our motherland. His speeches are of great historic value today and hence, one of his speeches has been reproduced here.

Damber Singh Gurung (Bengal: General): Mr. Chairman, Sir, I stand here today as the only representative of 30 lakhs of Gorkhas permanently domiciled in India. It is 30 lakhs, near about the population of the Sikhs; still I am the solitary representative here in this House. I need not give any introduction as to who these Gorkhas are. They have made themselves sufficiently known to the world by their excellent fighting qualities. It has been proved to the hilt during the last World War No. I and No. II that they are the greatest fighting race in the World.

It is on behalf of these valiant Gorkhas that I, as the President of the All India Gurkha League, wholeheartedly support the Resolution moved by Pundit Jawaharlal Nehru. It is high time that we should take such a strong step. If we adopt the policy of wait and see as has been advocated by Dr. Jayakar and supported by Ambedkar, we will never reach our goal. The Interim Government which is functioning today would not have come into existence if we had adopted that policy. Fortunately these two Doctors are not Doctors in Medicine; otherwise they would have killed the patient by delaying the operation (Laughter). We have waited too long and we should not wait any longer. It will be simply our weakness.

Sir, it has been very often said that the Gorkhas have been the stumbling block on the path to freedom. It may be true if it is viewed from that angle of vision but it must always be remembered that, especially in the Military Department, duty first and duty last, and the discipline is the most essential thing without which no nation can rule. Now in Free India you will ask us to do the same thing as we were asked to do under the British Government, if there be any disrupter of the constitutionally established Government, and you will praise them for maintaining that discipline.

Sir, the problem of the Gorkhas is quite different. They are scattered throughout India. It is only in the district of Darjeeling and the Province ofAssam that they are concentrated to a certain extent. Their number in these two areas is about 14 lakhs and the rest are scattered throughoutIndia. They are very very backward educationally and economically. Though we were made to do the dirtiest work in India for which we have been even called butchers by Indians; (and) though hundreds and thousand of Gorkha lives were sacrificed to keep the British rule in India and elsewhere, nothing has been done by the British Government so far for the uplift of the Gorkhas. We have been very sadly neglected. Only at the time of war they remember the Gorkhas. It has always been the policy of the British Government to keep us backward and ignorant so that we may be sacrificed any time, anywhere they liked.

The Gorkhas are apprehending (apprehensive) whether the same policy will be followed by the Congress too. There is strong ground for this apprehension. Before the election of Members to the Constituent Assembly, the All India Gurkha League approached the Congress High Command to give adequate representation to the Gorkhas too in the Constitution Assembly but our claim was totally ignored and not a single seat was given for 30 lakhs of Gorkhas, whereas as many as 3 seats were given to the Anglo-Indian whose population is only 1 lakh 42 thousand in India. I do not think that Gorkhas will, any more, tolerate this kind of injustice. I have, very recently been to Nepal, leading a delegation of the All India Gurkha League to His Highness the Maharaja of Nepal and I hope Nepal will not allow any such exploitation of the Gorkhas. Sir, the demand of the Gorkhas is that they must be recognized as a minority community and that they must have adequate representation in the Advisory Committee that is going to be formed. When the Anglo-Indians with only 1 lakh 42 thousand population have been recognized as a minority community, and Scheduled Castes among the Hindus have been recognized as a separate community, I do not see any reason why Gorkhas with 30 lakhs population should not be recognized as such. The Gorkhas whose total population including Nepal is 15 millions shall have to play a very important part in Free India. I request the leaders to consider this very seriously.

Lastly, I would like to say a word, Sir. If Mr. Jinnah thinks himself to be an Indian, I would request him to come to India and settle the differences here, as this is our domestic quarrel. Why should he seek the help of those who kept us in slavery for centuries? I would think that a kick from a brother is more palatable than a hypocrite pat from an outsider. If the major party does not do any justice to the cause of the minorities, we will combine together and revolt and make India a hot bed and I am afraid, the ancient history of India may be repeated. But I must make one point clear, that no minority will support the fantastic claim for Pakistan of Mr. Jinnah. We stand for a United India.

In spite of all this, if Mr. Jinnah goes on throwing the challenge of civil war, I ask the country-men to accept that challenge and let us fight it out. As for the Gorkhas, we will fight along with those who want one India and oppose those who want to divide it.

Note to our politicians: If we ourselves do not celebrate our freedom fighters, who else will?

Be the first to comment on "Happy Birthday Damber Singh Gurung"