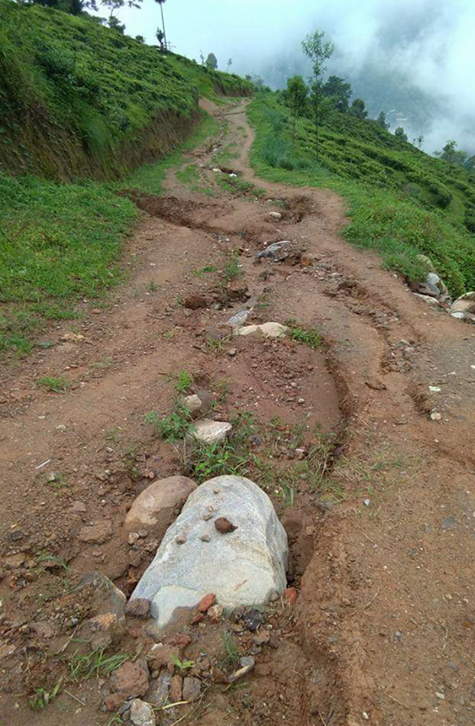 These days rumors are rife in some sections of Darjeeling that the administration is allegedly working towards ensuring “development” of the Gorkhaland Territorial Administration region, where as reality is that, majority of the places are even deprived of the most basic infrastructure – roads. Situated less than 10kms away from Darjeeling town, the numerous villages in Singtam Tea Estate are yet to be connected by road, and even for villages where construction had started in 2013, the roads have been left half dug.

Just a little distance from Singtam fatak, the road access to villages like Ramlal Dhura, Rockvill, Dhanmand Dhura, Godam Dhura are next to non-existent.  One of the locals, a 70 year old Gajdish Rai who wants to see Tar line up the road before he dies questioned, “I have lived without roads, but will my grand children have to suffer the same as me?”

According to a local Mahesh Dewan, “the road work has started in 2013, but it was stopped midway, then again they laid foundation stone for the road in 2017, and after constructing a few walls and parapate, the work has again been stopped.” Singtam Road – They dug but left

Mr. Madan Rai of the Ramlal Dhura Gram Sudhar Samiti has stated, “In the two-phases, only 10% of the road construction has actually been undertaken. They dug few patches and left, now during rainy season we suffer more, the students have a harrowing time getting to school and back.”

There are over 1000 residents who live in the 5 villages, and they have to suffer a lot, especially while transporting sick and elderly to town. Many a times, people have died while being transported to the main road. This utter apathy and neglect has left the residents fuming.

Will the administration “wake up” and ensure that this road is completed, or will they continue to neglect such basic infrastructural needs, while parroting “development”?

Only time will tell No Roads in Singtam