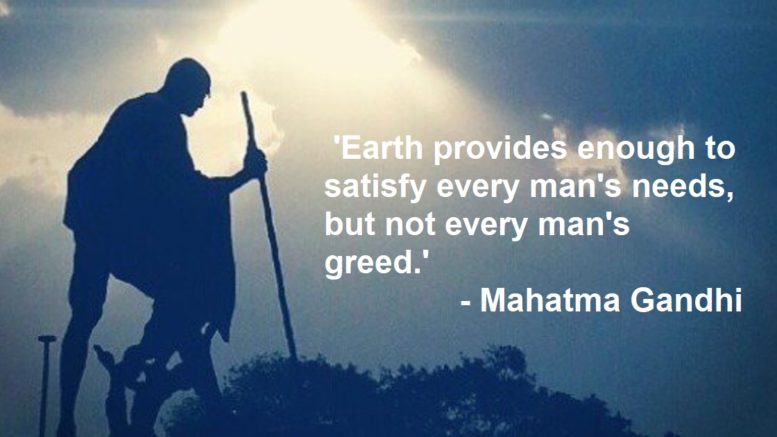 
Owing to the long tradition of environmentalism in India, Gandhi cannot be considered as the earliest Indian environmental thinker, however one can certainly argue that he was one of the foremost visionary and practitioner of Zero waste. The term Zero waste never existed in Gandhi’s vocabulary; likewise, any historian would point out Gandhi was no naturalist, nor did Gandhi involve in any environmental activism. But he held deep environmental sensibility and played a significant role in promoting sustainable living. This article intends to articulate Gandhi’s lifestyle and consolidate it with Zero waste conventions.

For long, ideas of “sustainability” and “Zero waste” were detested and limited to either policy documents or among the academicians and think tanks. The rising consciousness among the civil society has helped these terms gain much extensive appeal; so much so that Zero waste has become a popular cultural movement, a trend and a fashion statement in itself. Zero waste is not a process but a goal, the goal to reach a state where we eliminate waste management by eliminating waste itself. What a layperson would call “waste” is a resource for a zero-waste practitioner. In simple words, conserve and recover everything and not to discard any valuable resource.

From the constrained space of hefty lexicons in books to the popularity of #ZeroWaste on Instagram, the idea of Zero waste has come a long way. The term Zero waste in its present connotation was arguably first used by Dr Paul Palmer who founded Zero Waste Systems Inc in 1974, a time several decades ahead of Gandhi. Noted historian, Ramachandran Guha asserts that one can either hate Gandhi or love Gandhi but cannot ignore Gandhi; I would argue that it would be a fallacy to ignore Gandhian values and practices on the environment.

Zero-waste philosophy lays great importance on the need to endorse local products and economy; they complement Gandhi’s idea of Swadeshi. Though one may argue that more than an environmental context, Swadeshi holds political significance,  however, Gandhi took an anti-industrialization stance and called Swadeshi as the “economy of nature”. Swadeshi movement has relevance beyond the politics of Indian Independence and held the overarching aim to challenge the monopoly of the market and reclaim the ownership of resources by the community.

We can further argue that when Gandhi preaches against human greed and materialism, he happens to shares an ideological similarity with Zero waste philosophy.

In pursuits of spiritual liberation, Gandhi led a life of an ascetic; he abandoned all worldly pleasures and refused any materialistic consumption. There have been four prominent instances of his experiment with sustainable living; Phoenix settlement in Natal, Tolstoy farm, Sabarmati Ashram and Sevagram in Maharashtra. These ashrams and community livings were places where Gandhi blended ideas of sustainable food production with the natural ecosystem, a practice which is now known as “permaculture”.

Gandhi first practised community living in his Phoenix settlement. With the aim of self-dependency, he promoted garden farming and started growing his food. It was in Phoenix settlement where Gandhi and his German comrade Kallenbach explored the viability of agroforest and got indulged in spreading community awareness on venomous snakes. Further, Tolstoy Farm also saw the practice of conservation values such as minimal living, scavenging and rainwater harvesting.  It was in Tolstoy farm where Gandhi first started making his chappals and reused papers to make envelopes. In India, Sabarmati Ashram was the epicentre of Gandhi’s sustainable practices, he practised spinning and made khadi to promote indigenous ideas. He also gravitated the manuring practice of rotting and composting the leftovers. It was in Sabarmati Ashram, Gandhi preached sustainability to the masses and making it a popular movement.

SEE ALSO:  PLASTIC FREE DARJEELING: An Appeal to the Heads of Schools in Our Hills
Powered by Inline Related Posts

If Sabarmati was the seedbed of sustainability ideas then Sevagram was the plantation site; for he implemented the vast array of sustainable practices in Sevagram. Swatch Bharat Abhiyan got popularized as late at 2014 however it is interesting to note that Gandhi had long recognized the need for public hygiene. It was in Sevagram where he first preached the importance of community hygiene and sanitation practices to the villagers, he fervently preached against public urination. Sevagram became an experimental village in many sense. Sevagram became the space for Gandhi’s explorations with mud houses(against the idea of concretization, which was gaining wider adoption). He further helped set up the handloom enterprise and most importantly conceptualized  Sarvodaya, through his philosophy of Sarvodaya, Gandhi attempted to bind the world under “ecological citizenship” and insisted on subsistence living. This idea of Refusal is another pivotal proposition of Zero-waste philosophy.

Gandhi was very mindful in blending ecological values with ethics and politics and stands as a tall political figure who treated the masses as pivotal allies of change. Gandhi repeatedly emphasized on Grassroot awakening and finding an alternative model of development. Zero waste movement is a grass-roots movement which seeks to challenge the hegemonic authority of capitalist forces; it seeks support from all societal spectrum. Zero waste movements can look up to Gandhian Philosophies to further extend their purview. Although Gandhi didn’t give a structured model of zero-waste, interlinking his philosophies and way of life would shed various parallels between him and the modern Zero-waste lifestyle.  Gandhi’s ecological sensibility harboured the ideals of sustainability and Zero waste. Though Gandhi did not formally write a Zero waste doctrine, we can safely conclude that his life was one. His everyday practices, his political philosophy, his preaching, his eating habits, his sense of fashion – all synced with the ideas of Zero Waste.  Much ahead of his time, Gandhi was a man who followed a Zero-waste lifestyle.

Writes: Abhimanyu Chettri, a student of Developmental Studies at IIT-Hyderabad

The Mountains Are Crying

Tea Tourism – Another form of exploitation

Be the first to comment on "Exploring Gandhi: the Zero-waste Practitioner"