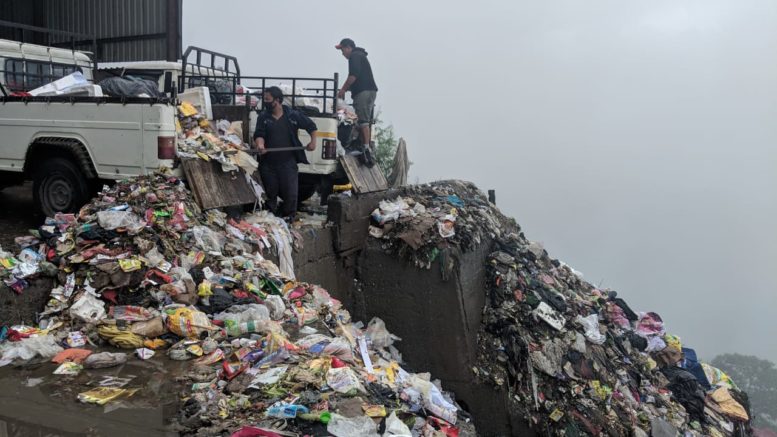 
Just as we reached, a truckload came in, and after a minute another. The rains had subsided to a light drizzle but the fog remained. We stepped to the side and watched the drivers expertly manoeuvre their vehicles in a practised manner, edging the back tyres just above the precipice. The backs of the trucks were opened up and the workers rapidly pitchforked the contents down the edge. At such a place, there was no dilly-dallying, for the stench was overpowering and flies swarmed, a thick black on the bonnet of the trucks.

On the afternoon of 14 August 2019, we were at Darjeeling’s dumping site locally known as the ‘chute’ situated right below the south-west part of town, the supposed resting place of all the trash that was collected from every corner of the town and rolled down the hillside in a true out of sight out of mind fashion. The cemented projection to aid the rolling down the hill process, that gave the chute its name had long since broken away. Peering down from the edge, the colourful trash spread a long way down, the lowermost end disappearing into the dissipating fog, making it seem endless. Down below crows picked on the rotting part of the garbage, styrofoam boxes lay scattered. The steep incline of the hill made it difficult to judge how far down the waste rolled, or how deep.

Raw sewage flowed out of a large underground pipe that opened a little below the edge pouring the contents out into the open, where it mixed with the water flow that washed the trash down, making the chute a large open drain, a scar on the landscape. Unlike other dumping sites, Darjeeling chute’s intersection with sewage lines made the situation even more complex. While most of us covered our noses unable to bear the stench, contiguous to the chute, a colony of families went about their everyday lives.

Once the trucks were in position, the workers, stony-faced carried out their task in a nonchalant manner. No gloves, no masks, no boots to offer any level of protection from the dangers that lay in handling the mixed waste. From the trucks, plastic boards that had announced a recent SALE! in bright red colours tumbled down by the dozens, styrofoam packaging, plastic packaging, plastic bottles, tin cans, glass, leftover food, rotting vegetables, used sanitary napkins and diapers, all. Another layer of trash was added to the existing one, where most would remain for a long time.

‘There is no such thing as away!’ we had repeated this quote by Annie Leonard over and over in all our presentations to those who chose to listen to us. “When we throw anything away, it has to go somewhere”. At the dumping site in Darjeeling, this line took on a whole new meaning and relevance like no place else before. We were at that ‘somewhere’ and it was not far away, not for people who lived around it.

This place in Darjeeling laid thick with layers upon layers of waste exemplified everything that was wrong with our society, our systems and our current lifestyles. Our waste had travelled out of our houses conveniently invading spaces of those who had no voice to protest, being handled by those who had no choice, polluting our water, soil and air endlessly. While we are blinded by countless sales and discounts into buying more and more, while the glitter and glamour of false ads push us to own more stuff than we need, we remain oblivious to the larger picture of where the stuff we bought is coming from and where they end up eventually. The convenience of the use and throw culture we have readily embraced comes at a huge environmental cost that is largely ignored. Our societies turned into big garbage manufacturing units with no conscience. This needs to be set right and it needs to happen at many levels.

Our visit to the dumping chute was as part of the Plastic Freedom Challenge that Zero Waste Himalaya organises for a week from August 8 – 15, a campaign calling on people to be free from plastics during the Independence Week. To drive home the message about the urgent need of reducing our waste footprint, we were there with a group of college students to see firsthand the waste situation and for the understanding to sink in. Similar trips to Gangtok’s landfill site and Mirik’s dump yards have been eye-opening experiences in the past.

Very few who visit these places remain unmoved when faced with the truth of the waste trail, the mess, the stink, the flies, the pollution, most importantly the callousness of it all. Many are prompted into action, to bring changes at their own level- the circle of influence that is very much in their control. For change always begins at an individual level, and we can set things right by being more mindful about how we live, what we buy and how we buy, and connect the dots that what we buy is eventually what we throw.

But will individuals making the right choices ever be enough to bring a difference when the overall problem is so humongous? This is one question that a lot of us grapple with. For people who say yes, they say so with the hope that these individual efforts shall ripple to influence more people into taking positive actions, and all the positive actions will add to a larger whole eventually. Teachers influence their students, students their circle of friends and families, schools, organisations and samajs adopt plastic-free practices, all of these actions matter and bit by bit it will surely add up.

However there’s increasing additional opinion that responding solely through individual and community actions in the face of such an enormous challenge is an exercise in futility, and there is greater need to work towards systemic changes and increased producer responsibility. We could not agree more. The world has undergone a sea change in terms of production and consumption; we are using up way too much stuff and disposing them at a faster rate than ever before. Local authorities have to respond to this change and get their act together by moving away from the age-old practice of collect, transport and dump of managing waste. These are no longer sustainable options. Improved waste management systems that are grounded on principles of decentralisation, waste reduction and maximum recovery, environmental sustainability and social justice is the need of the hour. In this changing scenario, the willingness and the motivation of the local bodies to address the problem is paramount.

Research says more than 40 per cent of all plastic goes into making single-use items, most of which are non-recyclable in nature and therefore with no solutions at the end of their use. In other words, companies are simply turning non-renewable fossil fuel into the trash (usually with unhealthy junk food in between). This is the main reason why our landfills and dump yards are overflowing with plastic waste.

Who will hold these companies to account for all the plastic trash that they have been constantly dumping on us? The obvious answer here would be to look towards the Government, that they should frame adequate policies to address this issue, but the alternate answer would be, to begin with, oneself, which brings us back to the debate on whether individual contribution matters. The power of the individual lies not only in carrying out popular messages such as carrying one’s own bags and reusable bottles, refusing plastic straws and plastic cups, but also in calling out companies, demanding for change, and boycotting products that are excessively plastic packaged. ‘Stop buying trash and the companies will stop making trash’, is a common refrain among the zero waste fraternity.

Beyond this, the power of the individual and community also needs to be harnessed for taking stronger stands, and our efforts geared towards holding local bodies accountable for adopting practices and systems that are designed for sustainable waste management in the long run.

At a policy level, systemic change and producer responsibility are embedded in the Solid Waste Management Rules and Plastic Waste Management Rules of 2016, and though there might be some grey areas, for many aspects the rules lay it down bare in black and white. It mandates segregation of waste at source at all levels, it addresses bulk generators such as hotels and big businesses, has a strong polluter pays principle, empowers local bodies to frame their own bylaws, talks of social justice and integration of the informal network of waste workers, along with many other provisions that Local Bodies, both urban and rural can use to improve the current waste management situations.

However even after 3 years of notification of the rules, most states have performed very poorly on its implementation, so much so that this poor performance has prompted the National Green Tribunal to summon many states (Sikkim and West Bengal included) reprimanding them with clear instructions and deadlines till when they have to be compliant with the rules. By when will Darjeeling and Kalimpong be compliant with the rules? What will it take to get us there?

Back at the Darjeeling dumping chute, a slight drizzle had begun. Two more truckloads of garbage had arrived after the first two had left. Around 50 or more odd trucks transport Darjeeling’s waste throughout the day, we were informed. Workers sifted through the trash with their bare hands. “It’s a challenging task to keep Darjeeling clean, but the well being of people who make it possible has never been of concern to anyone,” they said. Most of the waste was rolled down the hill but a tiny bit of PET and metal that had some recycling value were recovered. The state of mixed waste made segregation and recovery a tedious task. As we watched them, we could not help but think what a world of difference a simple effort at segregating our waste to keep the recyclables separate would make for the workers.

Before we left, in a huddle we shared in one word how the dumping chute made us feel. Shocked, disgusting, the students shared. Ashamed and guilty were two others. The bright red boards announcing SALE! were soon covered by the new layer of waste. Slowly we made our way up to town as the fog covered the dumping chute and all that lay beneath it.

Walking Down the Forgotten Roads of my Hills