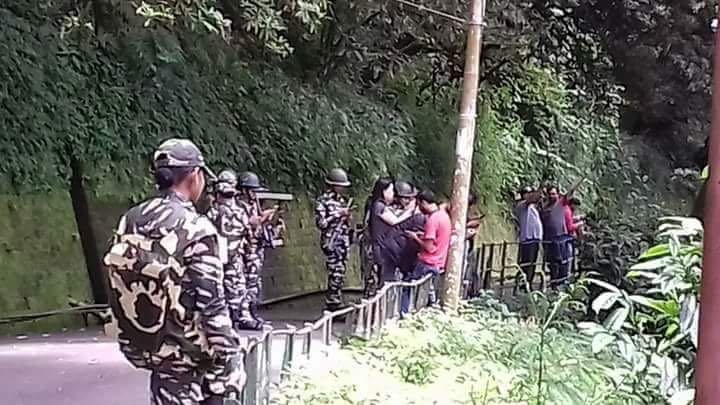 The GJM led by Bimal Gurung declared a total shutdown in the hills. The shutdown lasted for 104 days.

The Gorkhaland movement is older than the Union of India, starting from the Hillmen’s Association of Darjeeling submitting a memorandum to Morley-Minto Reforms Panel in 1907 . The memorandum sought to establish Darjeeling as a separate administrative unit. The movement has seen agitations at various points seeking essentially a separate administrative unit. It was only during the agitation of 1986-88 led by Subhas Ghising that the demand became one for a separate state. No state has been created as of yet, and various ad hoc measures to grant greater autonomy have been tried and failed.

The latest agitation began in June 2017, it initially began due to the imposition of Bengali in the Hills through an order from the Chief Minister, Mamata Banerjee which made Bengali a compulsory language. A supplementary order exempting the hills came out soon after, however the agitation had already started. Protestors gathered outside the secretariat in Darjeeling raising slogans for Gorkhaland, the jittery West Bengal police opened fire on the unarmed protestors killing three. All the three killed were members of the Gorkha Janmukti Morcha (GJM) the main political force in the Darjeeling hills at the time. From this point on the GJM led by Bimal Gurung declared a total shutdown in the hills. The shutdown lasted for 104 days . During this time there were street agitations and battles with the police, who often ended up firing on protestors armed with only sticks and stones. An internet shutdown was declared, but the news still leaked out through ‘Jio Dara’, a hill facing Sikkim from which the internet could be accessed by both the security forces as well as the civilians. The other source was the rising number of gunshot victims who came for treatment in Jorethang and Namchi in Sikkim. The Sikkim police even filed an FIR against Kalimpong Superintendent of Police Ajit Kumar Yadav for committing murder in Sikkim when Lalit Poudyal was shot dead by a team led by the SP.

Soon after the shutdown was declared, the West Bengal police raided the house of Bimal Gurung in Patlebas, a poorer neighbourhood next to the tea gardens on the outskirts of Darjeeling. The raid as reported saw the seizure of deadly weapons , though the videos of the ‘weapons ’ seized only showed gardening tools and sporting equipment. Bimal Gurung has been in hiding ever since the raid, due to all the incidents of violence that have taken place in the hills since the shutdown was declared have translated into a police charge sheet against him and other leaders of the GJM. In August within a space of a few days, there were bomb blasts in Darjeeling and in Kalimpong . The blast in Darjeeling saw no casualties, however, the blast in Kalimpong saw the death of a civic police volunteer. Both blasts resulted in Bimal Gurung being booked under the Unlawful Activities Prevention Act, 1967.

In November the Supreme Court of India passed an order restraining the West Bengal police from taking any ‘coercive measures ’ against Bimal Gurung, essentially giving him an opportunity to be heard. The writ petition filed on the 14 th of November essentially is to seek an independent investigation of the charges levelled against Bimal Gurung, who contends that the multiple charges levelled against him are only to harass him and tie him up in years of litigation. Another writ petition has been filed on the 23 rd of August by Roshan Giri, the General Secretary of the GJM to have the bomb blasts investigated by the National Investigation Agency, which was created specifically to investigate offences under the UAPA. A Third petition has been filed on the 28 th of November by Sabita Bhujel, the widow of a Kalimpong Councillor Barun Bhujel who was killed while in police custody during the agitation. Sabita Bhujel’s petition is to be heard on the 8th of December. The other petitions are to hear in the course of the next week.

Open Letter to the Chief Minister of West Bengal

Be the first to comment on "Gorkhaland: From the Streets to the Supreme Court"