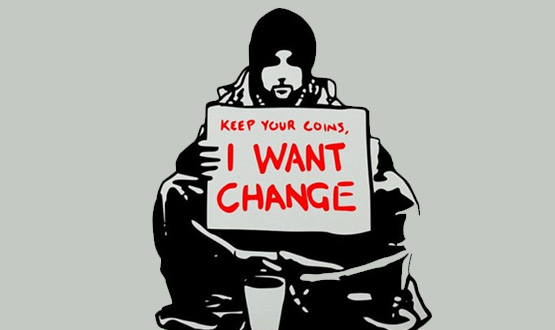 
Political landscapes in a democracy are always in a state of flux, and is by it’s very nature changing and thus unpredictable, as multiple factors impact and influence it. Several ideologies and political biases have completely influenced and altered people’s narrative on the mechanisms of democracy.

Emergence of the post-truth politics, a culture which has imprinted false notion and seeds of polarity. This culture has given rise to the political binary and an incentive to the citizens living in the fast paced world to take sides. Hence, an action-based plan that could have been for “Plastic Ban” ended up for the “Beef Ban”.

But when did that happen?

Gauging political pragmatism has always been a struggle for India. May be solutions based on practicalities are harder to cater to nearly 1.25 billion people, than implanting them with a theoretical subjective utopian dream.

Whatsoever, the political drama, it sure does have a director.

The intention of this article is not about understanding the psychology of their political motives but objectively analysing the emerging pattern which can help people to decide for themselves, without an external stimulus.

Path to liberation through sectarian violence has always back-fired the adjustment mechanism within a democratic system. It catalyzes a commoner into the mutiny mode against the totalitarian group. But what triggers such radical participation within the sub-groups? The answer is the untold agreement that makes “you” the sole beneficiary. It doesn’t matter if the prevailing narrative being peddled are packed and parcel with rhetorical fallacies. It will always promise the better version of now. Of course a deal made with a “little bit” of your cooperation.

As Adolf Hitler stated “great movement on this earth owes its growth to great orator and not to writers”. No matter how violent the movement may have been – one of them of course being Nazism, the most violent movements in the history of the planet led by him. The art of oration has always been the key behind swaying the mob.

Of course the other part of the spectrum being radicalism, also often referred to as “Terrorism”.

The relationship between the political orator and the mob could be compared with that of a buyer and a seller. The irony today is that the orator trying hard to sell a dream with null investment for which the mob is ready to buy and die for.

Political Narratives – Serving only the few

What needs to be understood is the democratic beehive built in today’s political context no matter how patriotic, is meant to serve only few sections of the society.

Sadly, we as mechanical bees require the buzz, we thrive on identity politics, we thrive on religious and caste differences, because may be rebelling against them defines our identity in a country where more than two million people are still homeless, the unemployment rates are increasing in exponential rate and 76 percent of the farmers want to give up farming.

These three indices could be sufficient enough to decide the fate of our country. But again if it was meant to be that straight, where could the grey money come from?

Hence, entanglement is important and fuzzy logic of communal and religious intolerance is required to conceal the naked truth of Hypocrisy.

Perhaps it’s not always the political group to be blamed but the consensus of each citizen of the land, for it’s we who choose them. Perhaps it’s not the top-down but bottom-up approach. The definition of truth may vary according to the geography we belong to, but the objective truth will always be related to our survival.

The idea is not to blame but to realize the potential of entity that can manifest its larger form just like the microscopic gene inside our body. A small mutation in the gene can alter the developmental process of the body.

Hence, the realization is that all conscious and aware citizens could lead towards that mutation with rationale and logic and could see beyond the fuzzy logic and define the control that had always been with them.