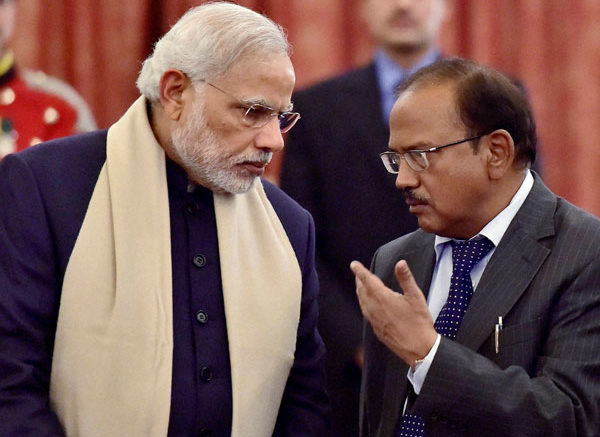 
An Open Letter to the National Security Advisor Ajit Doval, who is reportedly one of the closest persons to PM Modi. Perhaps the only way to reach him, as meeting him in person is neigh impossible, I presume – writes Upendra

Welcome to our beautiful region.

Given your wide-ranging experiences from being one of the finest intelligence officers our nation has ever seen to founding the Vivekananda International Foundation, I am sure you must have had the opportunity to visit our region many times in the past. But this is perhaps the first time, your arrival was publicly announced and thus I am taking this opportunity to write you an open letter, so that you get enjoy your stay better.

Sir, according to media reports you are somewhere in the Makaibari region, I am hopeful you are enjoying your stay. Since you are already put-up in the lap of a tea garden, can you please take some time to take a walk sir, and visit the villagers who live there, find out how their life is going, and what do they think of the 5-star hotel that has come up in Makaibari?

Even as our nation celebrates “Azadi ka Amrit Mahotsav” tea garden workers are forced to operate in a feudalistic set up, where at least one member of the family has to be employed in the tea garden, else the garden management can order the ouster of the family.

So, I am requesting you to kindly visit the tea gardens and you will get to enjoy the First Hand Stories of the tea workers along with your hot cup of the First Flush Special Finest Tippy Golden Flowery Orange Pekoe tea, yeah the one they sell for over Rs 4-lakh-a-kg in the market, and pay the tea garden workers only Rs 235 per day to produce.

The taste of Darjeeling tea you are probably so relishing comes from the blood and sweat of these workers Sir.

2. Drive through the main road in a local taxi

Sir, I have grown up reading stories about your great exploits for our nation. Especially you going undercover in Pakistan for 7-long-years.

Live the thrill once more Sir, travel incognito across Darjeeling hills, Terai and Dooars region. Meet with everyday regular people, spend some time in the Momo hangouts, Chowrasta, Dambar Chowk, Jaigaon Bazar, Malbazar Haat – see how the people across this region are enjoying their lives under the most generous and caring West Bengal government. So what if the Panchayat elections to our region have not been conducted since 2000, and the GTA forcefully imposed, people are voting for GTA and electing their representatives, and dancing and singing while the mortal remains of our soldiers are still warm from their last breath. So what if we don’t have a single government hospital in the region with a CT Scan Machine or enough doctors and nurses. So what if our roads are crumbling and there has been no infrastructure development in the rural region for decades, as the WB Chief Minister Mamata Banerjee claims “Pahar Hasche”.

I am sure you will be happy to learn that “Pahar Hasche” is not just a catch -phrase, but the reality of life here. We have to “Hasche” even if jabarjasti, why risk getting arrested by frowning, so we smile. Just like how Joker smiled in the movie aptly titled “Joker” – have you have seen it?

3. Enjoy a Visit to the Schools and Colleges

You will not only get to meet some of the most highly qualified teachers who have been recently appointed to teach in schools under the Gorkhaland Territorial Administration first hand, but you will also get to perhaps understand why Darjeeling MP had to write to the Ministry of Defense requesting them to lower the qualifying educational criteria for Gorkha Youths for recruitment into the Indian Army.

If you are lucky, you may also get to see College Professors sitting on a hunger strike demanding the recognition of their college.

Sir, I had the pleasure of visiting the HNB Garhwal University in Srinagar. I was pleasantly surprised to note that the august University had been established in 1973. In Darjeeling the demand for the setting up of a University can be traced as far back as 1955. The demand for a Central University is as old as HNB Garhwal University. Yet, the government of India has turned a complete deaf ears and blind eyes to the request from our region. Like the great street fighter Rajdeep Sardesai once labelled “tyranny of distance” to justify non-coverage of issues from the NE region, perhaps the Govt of India too suffers from the same. But since, the Govt of India has come to our region – in your form, we hope this will ring in your ears.

Sir, as you are aware, recently there was a massive landslide in Manipur, in which at least 30 jawans of 107Bn T.A (11 Gorkha Rifles) which is headquartered in Jalapahar, Darjeeling have been martyred. The mortal remains of around 14 jawans have reached the region.

We are used to our Martyrs being ignored by the West Bengal government, as they have done so innumerable times, it is kind of reassuring that the Central Government too feels equally indifferent. Despite the largest loss of serving soldiers our region has ever seen in peace time, no one other than Central Minister John Barla (who is from here) has bothered to visit the region. Hence, may I suggest, you avoid meeting the Sahid Pariwar, just to keep the indifference perpetuating.

So what the Gorkhas have shed blood for the nation since the time of our independence and before? So what the Gorkhas are zealously patriotic to a fault, the Govt of India has continued to deny them their rights – like inclusion of 11 left-out Gorkha sub-tribes as Schedule Tribes, citing the bogey of “Nepal citizens may take advantage as ST in India”? This is as classy as it gets. Deny the Indian citizens their rights, citing the fear of foreign nationals. Do you have a hand in suggesting this excuse Sir? For if you do, I salute your ingenuity. Nothing works on politicians better than fear of the foreigners in our country.

No matter what you do Sir, please avoid talking about Gorkhaland.

Uttarakhand and Darjeeling have similar geography, people, political conditions, yet Uttarakhand became a separate state, and Darjeeling hasn’t. Sometimes we are told it’s because “we live in a critical geography, we can’t have Nepal on one side, Bhutan on the other, Sikkim, Darjeeling, Dooars dominated by the Gorkhas.”  Forget the fact that thousands of Gorkhas have sacrificed for our nation, and the immense contribution of the Gorkha community towards our nation building. Hold on to the centuries old grudge if you must, label us foreigners, immigrants, outsiders, whatever you must, but please don’t say a word on Gorkhaland.

The people from Darjeeling hills, Terai and Dooars have endured all. We have lived through the atrocities of Congress when the original Naxalbari movement was on, we have survived the tumultuous Communist rule for 34-years, we are surviving the draconian TMC government for 12 years, but we know they opposed Gorkhaland. But what is actually causing the slow death of the people from our region is the “meethi churi” approach of the Central Government under Prime Minister Narendra Modi, who once proclaimed “गोरखाओं का सपना मेरा सपना – The dreams of the Gorkhas are my own” and has perhaps forgotten to wake up to make those dreams come true.

Hence, avoid talking about Gorkhaland, or even thinking about it.

We know Sir, you must have multiple agenda and issues to deal with nationally, so I felt I will help you with avoiding some issues, while you relax with your family here, and perhaps meet with politicians who have won the recent elections and ink a few deals on “Political Solution” (fact that Mamata Banerjee hasn’t said a word against your presence here is a dead give-away).

I hope you will enjoy your trip to our region, and see how well developed our region is, how “tea tourism” is thriving in our region, how everyone is happy, how our education system is top notch, how grassroots democracy is thriving, how people are celebrating in the streets, how our infrastructure, hospitals have all been made world class under the most tolerant, benevolent, kind, generous, and gracious TMC run Government of West Bengal.

Enjoy Sir, for I am sure, that’s what you came here to do.