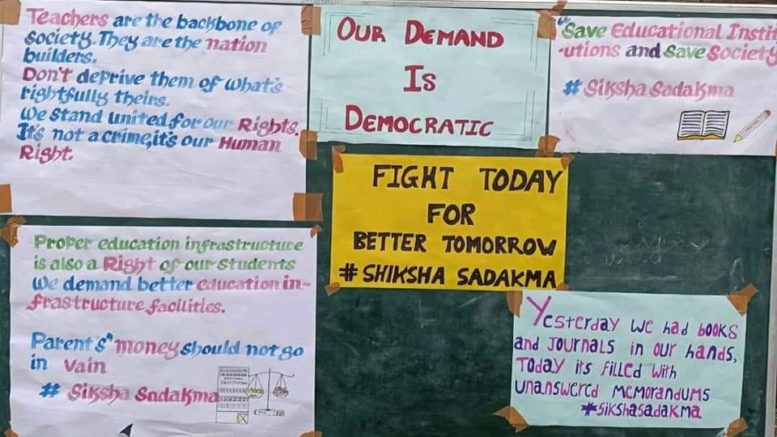 
The Ghoom Jorebunglow Degree College, Darjeeling has consistently been a source of news and stories in recent times, ironically most of the times for reasons not related to education. What should have been a centre for knowledge and learning has contrarily become a floodgate for controversies, debates and politics. The college has yet again become a centre of attention with the staff members of the college holding a complete pen down strike starting last Friday. i.e., 29th of April – their one point demand being for the college to be formally recognised by the state Govt.

The college has for quite some time been in a chaotic state, operating without an administrative head till recently, when one of the faculty members was appointed as the Teacher-in-Charge (TIC). The said appointment was made following a protest launched by the association to have one of their members appointed as the TIC. Even though the person projected by the association wasn’t appointed for the position, one of their other members was, which went on to settle the ripples for the meanwhile.

It is important to note that the staff members of the Ghoom Jorebunglow Degree college, along with the faculty members remain divided into two fringes, defined by their membership and non-membership in the association. While those in the association claim to be acting as a collective voice for the welfare of the college, those who aren’t a part of it express their reluctance in being a part of anything political and their interest in confining themselves to their regular duty. The association also acts as a face to all the movements and protests that are initiated in the institution. The reports of the members and non-members of the association being in a conflict have unambiguously surfaced in the public and administrative domains on multiple occasions.

When the Darjeeling DM was asked about his opinion on the situation, he responded that his “office was already pursuing their demand of Govt recognition and that the proposal had already been sent 4-5 months ago”. He also said that “one of their demands regarding the appointment of the TIC was already fulfilled.” He further said, “They can pursue their demand, but not through a strike. They have to understand that the student’s education will be hampered.” He also expressed that he “will be calling them for a discussion.”

He was also asked about the ineligibility of the present TIC for the position in terms of qualification, to which he said that it was a temporary arrangement till a Principal was appointed in the college. When further asked about the alleged politicised nature of the faculty team of the college, he refused to give any comments.

When the present TIC, Mrs Hemanjali Tamang was contacted regarding the pen-down strike held in the college, she held that the recognition of the college was imperative for the benefit of the faculty and the students. She said that “though assurances on the same lines were made on multiple occasions, any fruitful step towards the resolution of the issue had never been made.” The faculty members, as such, she remarked, were left lingering without any security of their future.

When pointed out that the pen-down strike would work against the interest of the students, she stressed that “the students and their parents were also taken into confidence before the protest was initiated”. She also said that “the university was following a truncated syllabus since the onset of the pandemic and that the departments had completed all of it and that the students could testify to the same”.

However, when an expert educationist was contacted regarding the syllabus and the time required to complete the same, he said “it completely depended on the respective departments and the number of classes thus taken. But, under normal circumstances, it was very unlikely for the syllabus to be completed this soon. Even if it was to be done, a question may arise about the quality and thoroughness”.

The TIC was also asked about the political affiliation of the faculty and staff members of the Ghoom Jorebunglow Degree college, pointing out that there were press conferences made in the past where they were seen to be accepting flags of a certain party and promoting the same, she said that “it was out of desperation for a solution that the faculty and the staff members would be lobbying with any party or leaders.” She later specified that though she would be a member of the association, she was no longer so, owing to her appointment as the TIC and thus would not be in a position to make any remark related to them or on their behalf. She, however, did acknowledge that “though the association may have a certain political standing, the pen-down strike was being observed by all the staff members, irrespective of their affiliation and that it was purely apolitical in nature.”

According to the TIC, the faculty and the staff of the Ghoom Jorebunglow Degree college are further planning to sit for a relay hunger strike starting the 5th of May.

When asked about his take on the issue, a concerned local resident of Jorebunglow said, “We hope the current impasse can end soon so that the students can begin their studies it’s their future that’s on the line, the teachers all have a paying job. A college recognition should have happened on the merit of the College itself but for teachers to come down to strike, the onus is now upon the government and administrators. We hope that the students are not made a scapegoat for minor political goals and brownie points”

SEE ALSO:  Valentine’s Day – In a season of Love and in a season of Heartbreaks
Powered by Inline Related Posts