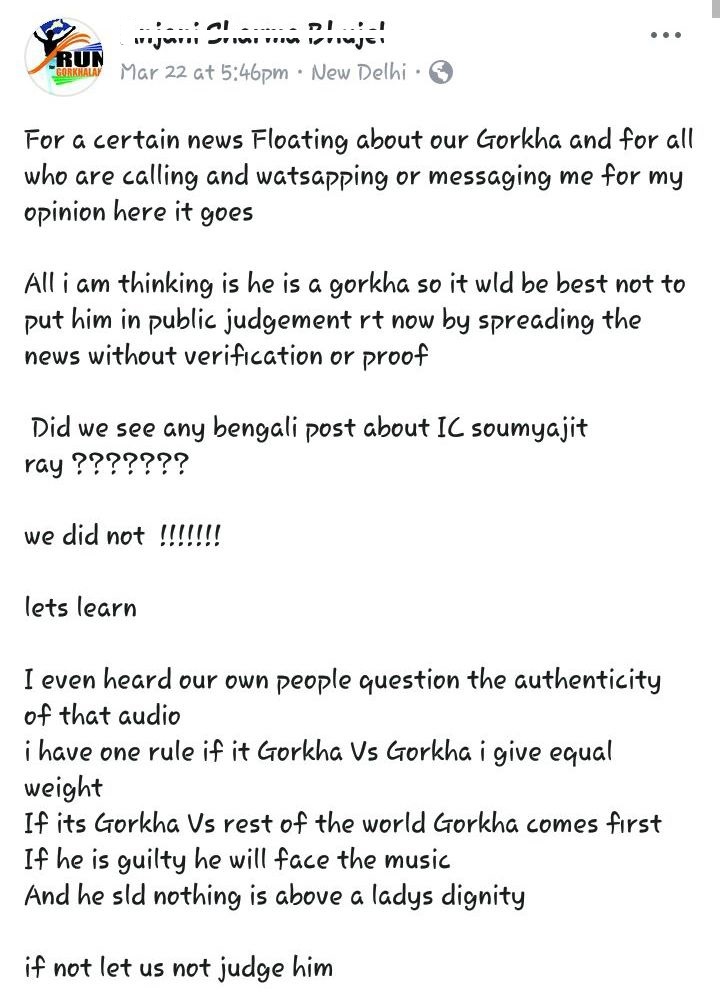 One of the most vocal Facebook personalities, voicing her opinion on Prof. Lama case

Prof Lama has been accused of multiple instances of sexual harassment of a Female Research scholar in China, from where she escaped following the incident. In addition, Prof Lama was also accused of harassing a student for helping the girl who was sexually harassed escape from china. In frustration, the victim who belongs to an economically marginalized family, whose father runs a barber shop had no choice but to move the Court. As of now, the Delhi High Court has issued multiple notices over the petition filed by the student against Prof Lama and JNU administration for having provided shield to Prof Lama.

The allegations anyhow didn’t come as a matter of surprise for me, as it wasn’t the first time that Prof Lama was being accused of a legal blunder. Earlier as well, a CBI inquiry had been initiated against him regarding the misappropriation of funds at Sikkim University, in that case to at the insistence of the Sikkim High Court.

What actually came as a greater surprise to me, is that some ‘leading lights’ in our community think that the allegation of sexual harassment against Prof Lama puts the “Gorkha” reputation at risk, and that we need to learn to defend the people belonging to our “Community”, and thus we should not jump into conclusion and share the news before the verdict is passed.

There was not a word of concern for the victim.

If the concerned person was an ordinary self, the view could have easily been digested and understood. But then the person holding this mediocre opinion happens to be a top brass leader of an emerging political party, the GSSS.

My question is – Since when did an alleged sexual molester become the representative of the Gorkhas or Darjeeling? How does him being an alleged sexual molester tarnish our history and reputation as a whole? Just because we think he is the epitome of ‘intellect’ among the Gorkhas (not me, but most of the self-declared ‘intellectuals’ do), should he have the liberty to do away with rape allegations?

Reminds me of a report I had worked on a few days ago, where a pastor in Tukvar had subjected a 12 years old to repeated rape over years, rendering her pregnant eventually. Hundreds of people poured their sympathy towards the child, while they strongly showed their outrage against the pastor. It was still an allegation, as it is on Prof Lama’s case. Did we wait for the court proceedings to end? Did we put a dent on the “Gorkha” reputation by sharing the news?

The reputation of the community that we talk isn’t a suo moto subject linked to the bureaucrats and self-proclaimed ‘intellectuals’ among us. Each and every person starting from an ordinary tea garden labour builds up the reputation, and alleged convicts should be nowhere a part of it. If Prof Lama hasn’t yet been proven guilty, we should very much keep in mind that he has also not been acquitted of the crime yet.

Another fascinating point on her part, which I would rather call frivolous, was the comparison of the case with that of the alleged rape threat allegation against Darjeeling Sadar IC Soumyajit Roy. She cited how the entire Bengali Community stood in his favour. Contrarily, as far as I could notice, there were Bengali folks across West Bengal who condemned the incident with no question. Even if we base our theory on her understanding and suppose that the Bengali community actually supported him, does this mean that we start supporting alleged sexual harassers? The very basic premise or foundation of our demand for Gorkhaland is the fact that we aren’t one of them and that we are different than them in every aspect. In  addition to that, our protest wasn’t against a community or a specific person belonging to it anyway, but it was against an IC who was accused of rape threat. Even if the particular person was a Gorkha, we would have protested with the same intensity.

SEE ALSO:  Winters In Darjeeling - Most Awesome Time Of The Year
Powered by Inline Related Posts

So according to her, if it is a case of a “Gorkha vs Gorkha” she gives an equal weight, but when it comes to “Gorkha against others”, she would remain mum and let the law take its course. I am certainly noting it down on my notebook as a finest example of hypocrisy, more because she is a woman herself.

What if it was our daughter being sexually harassed by someone? Would we expect people from other community to support the culprit. For me, a woman’s modesty and dignity stands before the reputation of our community, or in fact any community. She should note this thing down before decorating her facebook status with phrases like “I am an Indian first, then a Gorkha”.

Even if we somehow qualify her perverted ‘Gorkha first” logic, I wonder if the lady from our community who is so vocal on facebook, took even a single moment to reflect on, if the victim too could have been a GORKHA? or did she get a call from her idol to assure her, the victim isn’t Gorkha?

As a part of her discussion with me, she asked me why I didn’t help the victims of rape threat in Darjeeling to file an FIR when I lived nearby in Siliguri, which I didn’t feel necessary to reciprocate. I don’t live in Siliguri first of all, which may help her with her efforts of understanding my whereabouts. And more interestingly, I am not helping the JNU girl file an FIR in that case. In both the cases, I held an opinion and stood with it. That’s me being an ordinary person from Darjeeling.

Now, what she forgot to mention about before pointing fingers on me was her own efforts and contributions to the Darjeeling rape threat case being a leader of an active political party. She made a ground breaking contribution by making “live videos” on Facebook. Apart from that, I didn’t see a single leaf of any tree shake.

I may respect her about as a person, but definitely not the opinion or idea in this case. I extend my solidarity with the victim, l also hope that the proper justice is served.

As more victims of Prof. Lama’s alleged sexul advances are emerging on a daily basis, I am not sure where this ‘leading light’ of our community stands with her “I will beleieve my hero” attitude. I just pray to God, may she gain some wisdom on the basic fact that while all sinners may have a future, all saints do have a past too.

Her saint, it seems, is a serial offender.

Be the first to comment on "But, You Madam! Are a Hypocrite"

LETTER TO THE EDITOR: "Is the Hon'ble Governor Awa

URGENT: Car Keys Lost One of our readers wrote to

LAUGH A LITTLE, LIVE A LOT