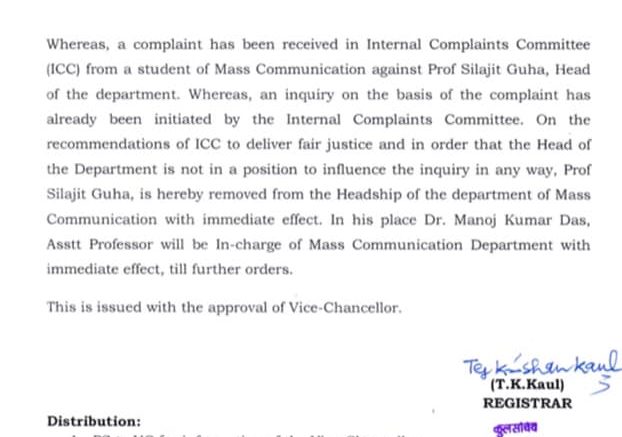 
In what is fast turning out to be a #MeToo like movement in Sikkim Central University, we have been informed that four students from the Department of Mass Communications have filed a complaint against their Head-of-the-Department Associate Prof. Silajit Guha accusing him of sexual harassment.

According to highly placed sources, Prof. Guha allegedly molested one of his students at a wedding held in Ranipool, which both were attending. Initially, we have been told that the student was not comfortable sharing her plight, however word about the incident leaked and there was a massive display of support with the survivor, and outrage against the perpetrator by fellow students on the Sikkim University Student’s Association (SUSA) Facebook Group. Following this, the victim could gather courage to file a complaint with the SUSA.

We have been informed that, after her initial complaint three more students have come forward to report the same.

Silajit Guha – Removed as head and divested of responsibilities

Following the complaint, and efforts on the part of SUSA the University Authorities have removed Prof. Silajit Guha from the post of the Head of the Dept. The order signed by TK Kaul, SU Registrar , dated May 13, 2019 reads, “Prof. Silajit Guha, is herey removed from the Headship of the department of Mass Communication with immediate effect.”

A followup order was issued later in the day, which states, “It is requested that Prof. Silajit Guha shall be immediately divested of the responsibilities of Supervision, Evaluation, Paper setting and other responsibilities as a member of faculty till inquiry is completed by ICC. He is debarred from Department of Mass Communication till inquiry by ICC is completed. He may during this period report in administrative block.”

This is not the first time Prof Silajit Guha has faced allegations of sexual harassment and molestation. Back in 2013, Assam University Executive Council had requested the Chief Justice of Assam High Court to initiate a judicial probe against Prof. Guha after he was found in a “embarrassing position” with a student in one of the Departmental rooms.

Despite our best efforts, we have not been able to elicit any comments from the SUSA executives, University Authorities or other Professors from the Department concerned.

This is a developing news story, we will do a follow up soon.

Be the first to comment on "BREAKING: Sikkim University Removes Silajit Guha as Mass Comm HoD Following Charges of Molestation"