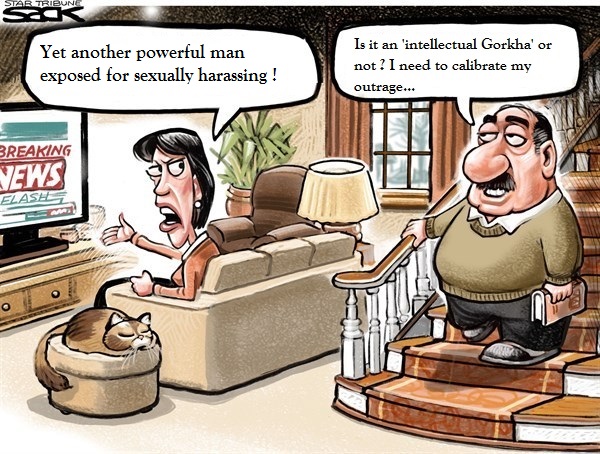 “Hundaina… hunai sakdaina… mo mandai mandina” says Dhanraj Mams… with an overtly dramatic waving of his hand in front of my face, swinging his thicksh fingers in a semi-circular pendulum like movement.

For a second, I just want to mangle his stupid hands and his stupid face, but then again, I am a Gorkha, and we the Gorkhas are now supposed to tolerate each other, despite all stupidities, idiocies and criminalities. For apparently these days questioning criminals and criminal behaviour among us makes us weak and turns our entire “jaati” into a laughing stock in front of the whole world.

So instead of slapping his face, I go on the defensive and politely nod in agreement, “tyai ta Mams, hundai hundaina… mo pani maandai mandina…”

There we were D Mams and I, meeting after a long time, last we were together was when Lota Kanchi wanted to strangle people. The same thado dokan in that terso galli has been our hang-out for decades now, and while he enjoys his nigar, I am relaxing with my tin-pani without any chinta or fikar.

But, just for this little bit of “hunai na sakne halla” that is being spread around by malicious elements to malign the highest of the higher “intellectual” to have ever walked in flesh and blood in the Gorkha world. For us Gorkhas, whose icons have been brave-hearts who bled for our nation, someone with self-publicized “intellectual brains” is the next best thing God created after tos-roti, Himal Chuli newspaper and some Delhi based Gorkha Al Qaeda organization, which is in fact the only such organization fighting for protecting GORKHANESS among the Gorkhas, over Facebook.

I showed him a Facebook post by our own Gorkha PT Usha ko awtari,  “He is being maligned, his name is dragged down the muck, he is being vilified, being targeted, being publicly humiliated, being exposed unnecessarily, our Gorkha men don’t do such things, if they need to, they marry two, three, four, even five or twenty wives, but they don’t do this…” of such sorts, it claimed.

“Precisely… Like our own Delhi based Gorkha Al Qaeda ko female Gorkha Osama wannabe says, ‘when it comes to Gorkha vs. the rest of humanity (or lack of it), we have to stick by our own‘… we have to… especially if they represent the elite educated lot, for the entire Gorkha identity and Gorkhaness is patented by them “intellectuals”, so if one of them turn criminal, the entire Jaati will be naturally criminalized… so even if others call our “brain brigade” rightful names, we shouldn’t… we should wait for the court verdict… or better yet, play victim on his behalf, and try and see conspiracy in his being exposed as a serial offender… we can always say this is a Central government ploy to sully the name of the highest of the higher “intellectual” to prevent him from contesting elections…” he agrees

I add to it, “it is true, our mostest of the more than the most intellectual Gorkha intellectual personality ever would have contested 2019 elections and won hands down, like how he did in 2014 and got 55000 votes out of 18 Lakhs… so to prevent him from contesting the elections and getting eggs on their face, the central government is ‘doing  dirty politics’ to prevent our Gorkha candidate from winning again.”

D Mams has this look of shock and awe on his face… I am happy, today I have outperformed him with my flawless logic. Though impressed, but a little worried he wonders out loud, “see national TV channels are reporting on it, there seem to be more than one victim… after all we are humans and we do fall at times… Daju could be innocent, but we cannot rule out the allegations by three individuals haina ra bhanich??” he wonders…

Since we are both on a roll, I wreck my brains, and come up with another ‘must be true’ angle, “may be the government is jealous of hamro Gorkha ko teaching abilities… maybe he is the better than the bestest Professors at JNU and since they cannot teach like hamro Gorkha, may be they are vilifying him, so that the Gorkhas continue to remain unappreciated.”

D Mams radiates, his hesitation gone completely “absolutely… so what if the students were approached inappropriately, and touched forcefully… what’s the big deal? what is good for them or not, how can a student know? it is because they don’t know anything, they go to study… so if their Professor feels they need some loving touches to keep them motivated towards their PhD degrees what’s the harm in it?” he adds.

“Medicines can be bitter at times, but it doesn’t mean it’s not good for you… so what would the students know, if their Professor touching them is actually good for them or not… ki kaso bhanich?” he asks.

Like a brand new convert, I add an empathic “AMEN!” to agree to his logic.

He further adds, “well, actually I’ve lost faith in the media… mostly all are paid media houses, one should wait and watch, and do ones homework and research, than depend on media news… that voice in the video in one of the news channels is definitely not a woman’s voice… it sounds like a man’s… so what if the voice is distorted using software to hide the identity of the alleged victim, couldn’t they have made the voice distort to sound feminine?”

Ruefully, he says, “everyone is after us Gorkhas these days… the entire country is hell bent on belittling us Gorkhas… in fact, the entire universe is… and what better way for them to attack us all than by attacking the tallest of the tallerest personalities among us who represents each and every one of us individually and all of us as a community collectively… in him molesting someone we all are equal participants, in him touching someone inappropriately we all are being equally inappropriate, in him sexually harassing and misusing his position of power we all are equally being irresponsible… so we all have to save him and defend his individual acts of immorality… just so we all save this iconoclastic among all Gorkha icons of ours… and in doing so… we save ourselves…”

I stood up and applauded, and so did everyone who was present at that Raksi dokan at that Moment… even Maili dropped her thangra and clapped… someone put two fingers in his mouth and whistled…

As we sat down to finish the latest round, I asked him… “Mams that was some speech… did you feel those words…?”

Coming from a dead drunk man, these last lines is what I retained… While most however retained the rest of the conversation, and seem to be proudly propagating those pearls of wisdom, which are befitting only raksi ko dokan.

But, sssssshhhhhhhhhhhhhhh don’t say that out loud, lest your Gorkhadity be questioned.