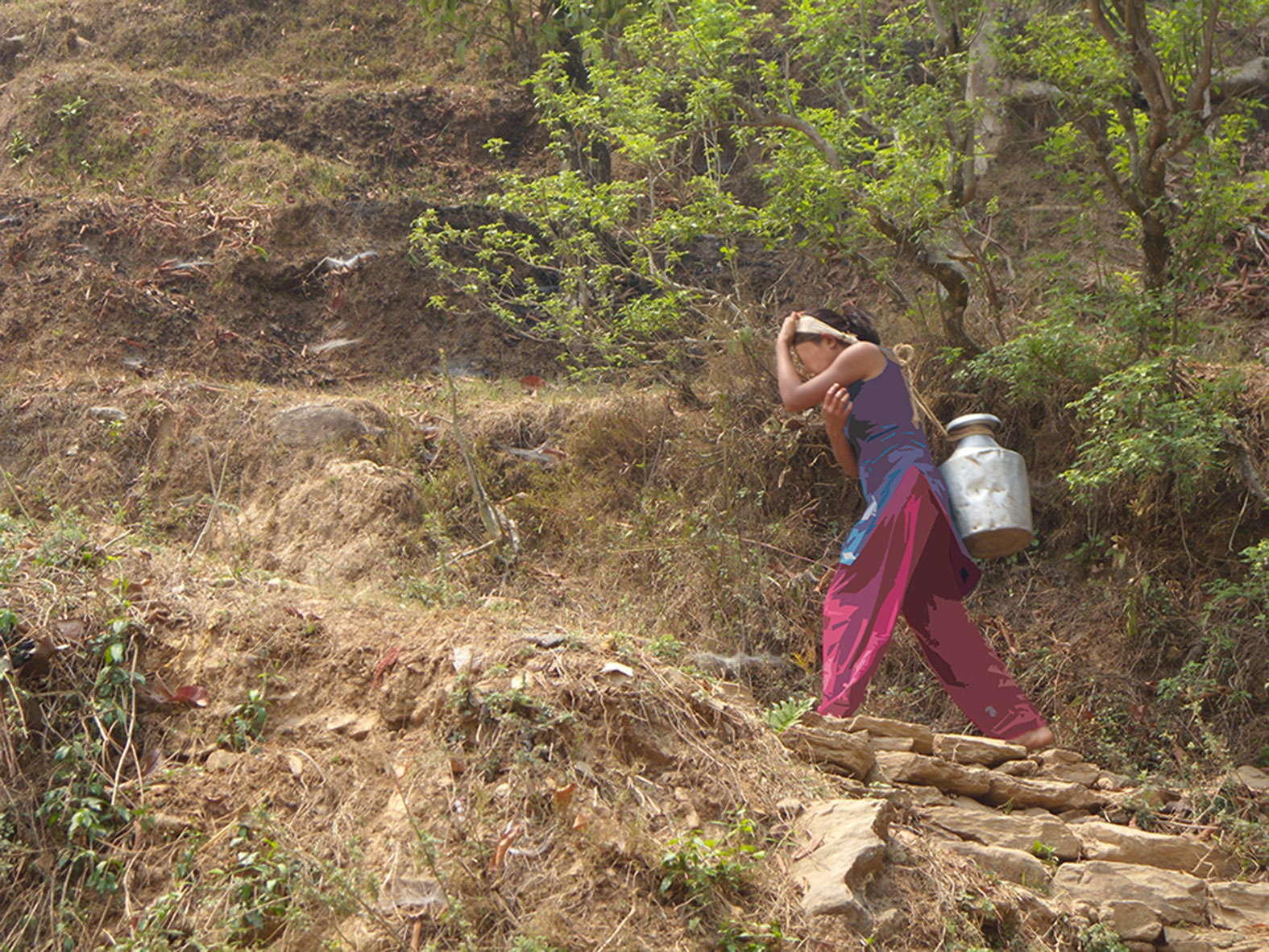 'A girl from the mountains' - Pic : Jyoti Thapa Mani

Fragile Nepal took a severe beating after the 2015 earthquake, rendering a multitude of its citizens to dire straits. The open border with India makes it easy for trafficking vulnerable girls to the Indian sex trade market, which has a fetish for fair-skin and superstitious beliefs of virgins curing sexually transmitted diseases.  Once here, the girls are too naïve and far away from home to escape. The said article mentions that according to the Sashastra Seema Bal (SSB), the trafficked children and women are sold to brothel owners in Delhi, Mumbai, Kolkata and other cities for Rs 50,000 each.

It is not just the Nepalese girls but also Indian girls who are daily being brutalised and harassed in all situations. Girls are constantly being lusted after–from brothels to even public or office spaces. She could be a trafficked victim or a normal student or a working girl or a family member—no one is spared. What is happening in Indian society that there is such a voracious appetite for sex either bought or forced upon.

Unfortunately, both Nepalese and Indian societies have this ‘no-return’ policy for ‘tainted’ girls. If she has been raped, nobody will marry her. If a girl has been a sex worker, she is not accepted back. She has no choice but to remain or return to the red light, which helps the profession to continue. Even office-going girls face a similar predicament. If she complains about sexual harassment at her workplace, she is unlikely to get another job. It’s a ‘no- return’ situation for her too. Her career will go for a total toss as she is labelled as ‘trouble’. Kudos to the junior journalist, who in 2013 blew the whistle on senior journalist Tarun Tejpal of Tehelka, for sexually assaulting her in a lift. It must have been very traumatic and difficult for her.

SEE ALSO:  Bihar Polls and What I miss this season
Powered by Inline Related Posts

Rape in India is an issue with a capital R. The 2013 National Crime Records Bureau annual reports 24, 923 rape cases, with most unreported. Madhya Pradesh scored highest rape incidence in 2015. Rapists do not even spare infants and sodomy of boys is also on the rise. On 31 Jan 2018, a eight month old girl child was raped in Delhi—hear the worst—according record of National Crime Records almost one in every three rape is of a minor. Human Rights Watch reported that 7,200 to 100,000 minors are raped each year in India. Worse, the devils also commit group assaults on the hapless victim. The highly perverted and cruel gang rape of 23 years old Jyoti Pandey named Nirbhaya on 16 December 2012 shocked everyone. On 14 March 2015, even a 71-year-old nun was gang-raped by six men at the Convent of Jesus and Mary in Ranaghat, West Bengal.  Conviction statistics in India are low with only 27.1 culprits convicted in 2013.

Within Indian legal framework, marital rape is not a criminal offence, while in 50 states of the USA, marital rape is illegal. A young girl once narrated her story to me. Hailing from a village in UP, she was married at age 15 with a body not yet matured. On her wedding night as she was being raped by her husband, his family were outside making merry. As she screamed they upped their volumes to drown her voice.  By 20, she had four children, malnourished, a broken spirit addicted to cheap drugs.  Is Indian society is hypocritical? Is sex is to be taken by force? Nobody has taught them the difference between perversion and normal acts. Nobody has taught them that sex with wives should be initiated with trust and gentleness for a long and happy marriage. Another married Delhi man Krishna watches porn films with his friends and then go to brothels. He has a wife at home with whom it is a quick job. When asked why did he not enjoy with his wife, he said if she gets used to pleasure she will become amorous and have affairs with others. This is the mentality they share with other men who do the same. Potential offenders are lurking everywhere looking for an opportunity. Many have wives at home. So what is the psyche that causes them to molest and harass even girls within the family. Many young girls live with the trauma of pawing and molesting relatives at home.

In all a heady ‘shooter’ of male chauvinism, poor self-esteem, vanity, strict society, joint families, rampant availability of child/adult pornography on mobiles/online, large screen titillation in Bollywood films, even foreign celebrities like Kim Kardashain flaunting their wide assets –are all leading the miserable Indian man to vent his fantasies any which way he can. Most Indian girls have been bottom-pinched, groped, stalked, eve-teased and faced indecent proposals at some time or the other.

Reminds me of a story.  A monster descended to a village to devour humans. So it was decided that each week, one human would be deposited at his cave to satiate his hunger. But hunger grew to greed and the monster began demanding a larger and frequent supply. Finally one brave man decided to accost the monster and kill him once and for all. He lured it to a mountainside and pushed him over to his death. Everyone was happy and much relieved. The nightmare was over and no one had to be sacrificed anymore. So it is with social decay, unless contained, it can grow and grow.

Indian society has to change. We should be ashamed of girls being abused whether from here or from a neighbouring country.

Why I Support Abhijit Iyer-Mitra, And Why You Should, Too