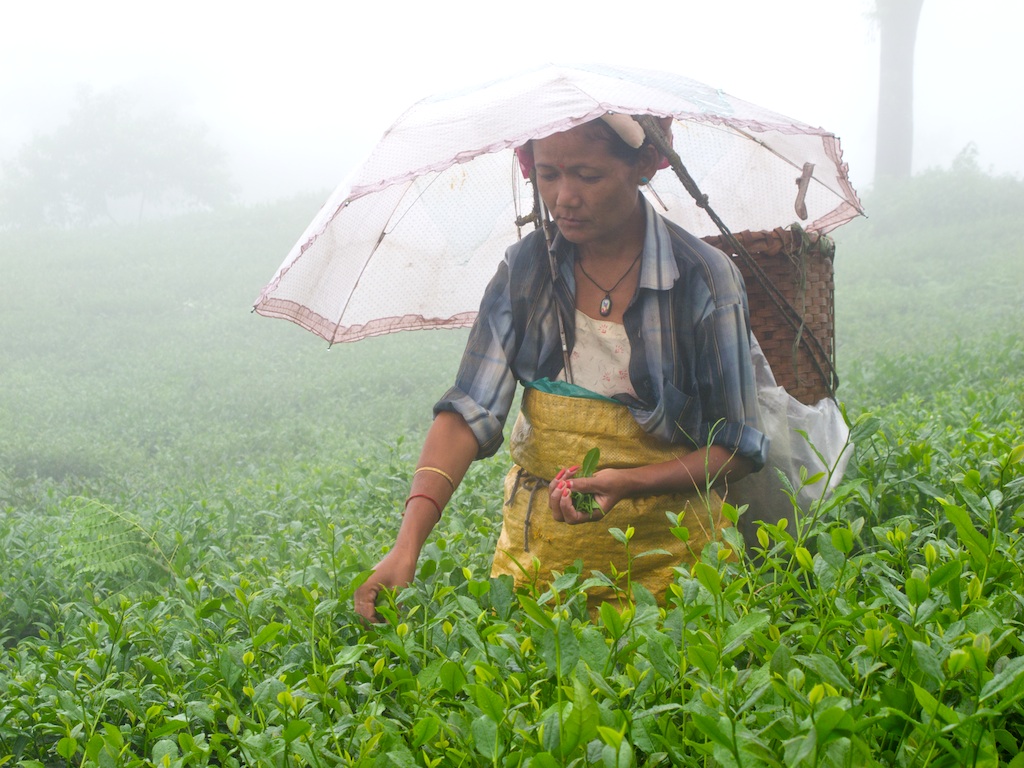 It’s time for the Monsoon flush, fighting with the wind and the rain women are seen bent at their waist behind the tea bush, plucking the tea leaves and carefully tucking it inside the cane basket hung on their head.
Their sunburnt faces and the frostbitten hands may tell you hundreds of stories of betrayal and vaguely inferior complexities that keeps swaying in the forest and the tea gardens. Each one of them though in the group, instinctively try to listen to the voice echoing in the valley, but the good news of their wage hike seems to be lost within the mountains. At the end of the day, a disappointed murmur overwhelms them and the group members’ console each other and instinctively protect themselves from the shock and pain, of expectations not being met once again.
When the world get their pot full of Darjeeling tea in the morning, they praise the aroma and the exquisite flavour that lightens up their day, but don’t even give a thought to the diligent workers who work in the Sun and the rain alike making white, black, green or oolong tea, bumping in the hump of the garden, steadily collecting each new bud, and moving from one stunted shrub to the other. While many flock to the factories, managing the quality and protecting for future use, but the chemistry between the tea workers and the tea seems unmatched when Makaibari tea makes 1,10,000 rupees per kg in the foreign market, the workers receive in return of their gratitude a sum of rupees 132 per day.
Needless to say that the gardens thirst for their blood and the workers have no choice but to sacrifice their lives in the tea bushes.
No one is free in a TEA-Estate, how can one be free ????
When you can’t move out of the plantation, since four or five generation your family is engaged in the gardens but still you don’t have any rights over your own land, you can’t get anything from the forest, the rivers are dammed, the quarries closed, how can one survive with such meagre income, when there’s nothing to supplement your income; and if you don’t work in the estates, you become homeless.
Where would they go??
Their son’s shoulder is laden less with the responsibility of a family and more with rifles and the responsibility of protecting the nation, and back home there is serious worry about Displacement.
So the workers who produce the ‘Champagne of teas ‘, had to be grown to imitate the three wise monkeys – speak not, see not, and hear not until the day, God turned his attention to the tea workers plight.
But Darjeeling has uncrowned kings here and there, who make unwanted noise to wake up people from those tea gardens – promising the heavens and their rightful wages and facilities. Their fates seem so uncertain, that the tea garden workers are forgotten in barely a week. The people have no remorse, but each one of those celebrity lions inevitably brought their bill and took their money, from the garden owners.
So each time when the sky promises a thunderstorm, one of them enters the garden, but every time with a different frequency, the challenge is to bring all of them in the same frequency. Sometimes Siliguri, Kolkata, Darjeeling, Babus hold meetings and send back a hike as less as Rs 4 and attach a letter for the loss of 104-day strike in the gardens that are still not managed.
The innocent workers look up to the uncrowned king, the king has changed, so has his gestures. With hands in the pocket, the local garden commander looks up at the vultures soaring high around the garden.
He thinks to himself, maybe there is still a little more the workers have to sacrifice to get the MINIMUM WAGE.