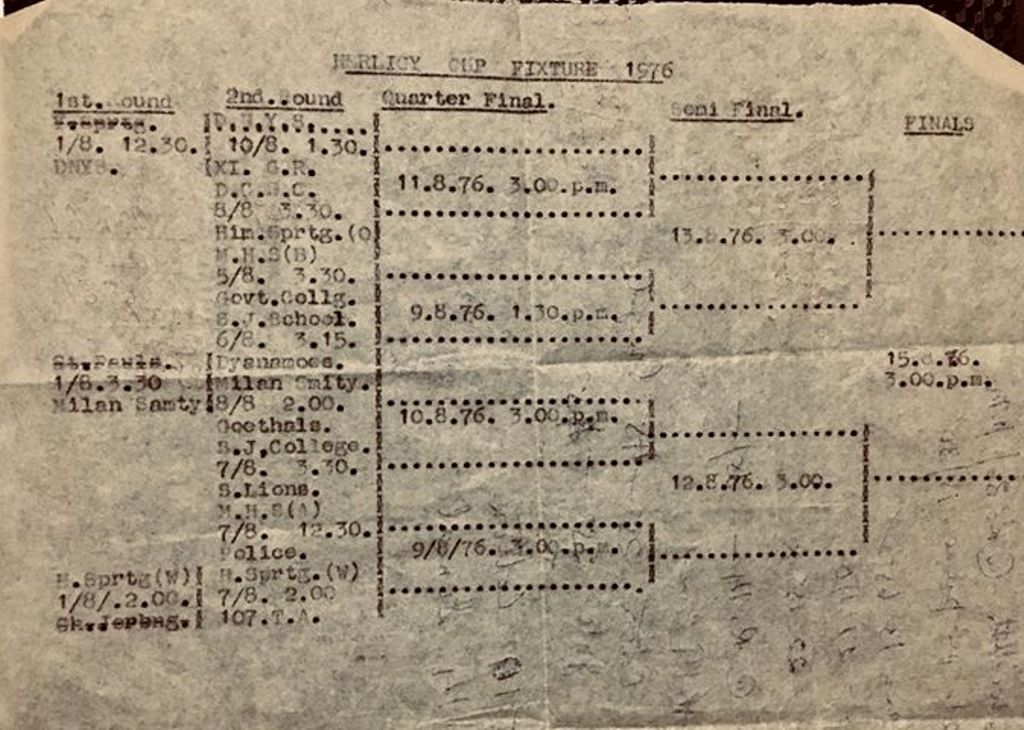 I came across this 42 years old document. Looks like it’s the HERLIHY CUP FIXTURE 1976.

Was it called HERLICY CUP? Or could it be a Typo?

This is a part of the glorious Darjeeling Football History. Was anyone of a part of it? Or does anyone know the full names of the abbreviations listed above?

We, Darjeelingays have always been Football fans. Seems like LOCAL FOOTBALL was worshiped by everyone, those days. Local lads who played at the District level were Heroes.

We often hear our elders talk Great things about football and these Tournaments played back then. “Amamamama!! Kya Hunthyo Football Teti Bela!!”- these are the words I heard a lot as I grew up (being a Singamari resident, close to NP ground) and still hear.

Appa often got into the feel (he still does) when he met his fellow football fans, or someone who actually played these great tournaments – ‘Shyam Thapa ko Back Volley… Amamama! … Benu Subba ko dribbling and left kick, dhyyaaammaii !! … Gyachola – most Stylish Acrobatic Goalkeeper… Jiwan Rai – best Striker, majja aauthyo nau, hai?’. One can easily make out by the conversations that LOCAL Football matches and clubs really had a lot of value back then. We still love and watch football. However, it’s all the International Clubs and players that we are after these days. Messi, Ronaldo, Manchester United, Arsenal, EPL, la liga, and many more.

Do we know names of any of the Local Heros these days???
Don’t we have good players?
Are our players not up to the standard?
Are our Local Matches not worth seeing at all?
Does our younger generation even know the names of our Local Clubs?
or Do they even know that there are Local Clubs that still exists??

SOMETHING TO THINK ABOUT ….

Mamata, Development Boards, Darjeeling-Dooars and the Gorkhas: Apprehensions and Implications