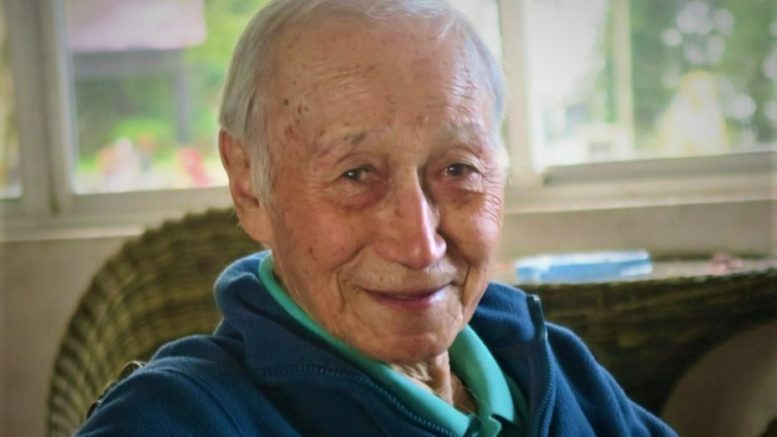 
Harish Mukhia was a trailblazer, who revolutionized the Darjeeling Tea Industry, and continued to serve our region and people till his last breath. A humble grounded man, who helped all those who sought his help, and considered his wife Mani as the main inspiration behind his success This is his story.

Born on the 27th of Sept, 1933 in Shillong, Meghalaya in an Army Family, Harish Mukhia was slated to be a soldier, but fate had other plans. In a way, he did become a soldier, but not the one who carried guns, but armed with his knowledge, passion and skills he was instrumental in transforming the Darjeeling Tea Industry.

In 1947 when India became Independent, Harish’s father Lal Bahadur Mukhia was transferred to Katakpahar in Darjeeling, and for Harish it was the love at first sight. He fell in love with the place. He started his schooling from the Govt High School in Darjeeling, and when his father retired from the Army, they settled in West Point, Dali. He joined St Joseph’s College and studied there from 1951-1956, and completed his B.Sc with a distinction.

A natural athlete, he was not just good in studies but was one of the best football players of his time. His contemporaries were Ambar Thapa, Chandan Singh Rawat, and former Darjeeling MP Dawa Norbula. His skills in football field won him accolades across the region, and the coveted ‘Blue Coat’ from St. Joseph’s.

Back then, Darjeeling was a hub of football in the entire Eastern India, and attracted teams from all over the country. In 1956, Mohan Bagan had come to play in the hills, and Darjeeling placed their best team forward. Harish Mukhia was a part of the team playing in the position of Central Forward. In the game, Harish scored a goal and dazzled the visiting team with his on-field skills.

Impressed by his exploits on the field, Mohan Bagan presented him an offer to come play for them in Kolkata for Rs 10000 a month, which was a princely sum back then. Thrilled at being given a chance to play for Mohan Bagan, Harish rushed to tell his parents and seek their blessings.  He would perhaps have made the Indian National Team, but fate in the form of his father intervened, who absolutely refused to let Harish go. In an interview taken in 2017, Harish had recalled, “My father refused to let me go, he said that if I come back with a broken limb, I would not be able to join the army, that ended by journey to Mohan Bagan.”

But he continued playing football, and had once said, “perhaps there is not a single ground in Darjeeling District where I did not play, heck I even went as far as Bhutan to play as a borrowed player”.

After completing his education, Harish joined the army, and trained in Jalapahar for 6-months. He was set to live the life of a soldier, however, fate intervened again and during medicals it was found that he could not distinguish between different colours – he was colour blind. He was sent back home.

The Army’s loss was Darjeeling’s gain.

The Founding of Mirik

After leaving the Army, Harish landed a job as an Assistant Manager in Gopaldhara T.E in 1957. Back then the tea estates were still controlled by the British, so all the managers were of British origin. He trained under the British managers at Gopaldhara for 2-years, and he was sent to Thurbo T.E as Acting Manager in 1959. In 1968, Harish Mukhia became the first Indian and Gorkha Manager of the Thurbo Tea Estate where he worked for 17 years.

It was during his time as the Manager in Thurbo T.E that Mirik developed as a tourism spot. The tourism department saw the potential of developing a lake in Mirik, which till then was just a small hamlet. Back then the tea gardens were on Freehold land, which meant that the tea companies owned the land and not the government. Harish recalled, “Mirik had a small bazar and all the people there had to pay rent to our company, I used to collect the rent.”

That is when the then West Bengal Chief Minister Siddharth Shankar Ray came calling and requested for the land in Mirik to be transferred to the government, as the land on which Mirik sits today belonged to Thurbo tea estate.

Seeing the potential of Mirik, Harish agreed to cooperate, and requested his head office in London to transfer the land to the government. In turn he convinced the government to construct a road via Mirik for Siliguri, as till then, the only vehicular road to Siliguri was via Jorebunglow. The government agreed, and Harish helped in transferring 150 acres of Thurbo T.E land to the government for the establishment of the Mirik Lake. Gradually, the road via Mirik was constructed and that is how Mirik went on to be developed as a hub of tourism it today is.

Harish later worked for Badamtam T.E, Chalsa T.E and later as an advisor to the West Bengal Tea Development Corporation based out of Rangneet T.E.

He established a Tea Consultancy on request from Ghoomtie T.E promoters, and helped establish tea gardens in Arunachal, and two tea gardens in Manipur near the Burma Border.

In all his years working in the tea industry, he never stopped learning. Following the Burndtland Commission Report “Our Common Future” published in 1987, people in developed countries became aware of the perils of climate change, and the need for practicing sustainable development. Harish was perhaps one of the very few from our region, who was actually aware of these greater developments happening across the world. He trained himself in organic farming, and was one of the first from Darjeeling, along with Makaibari’s legendary Raja Banerjee to learn about Biodyamic farming from the Biodynamic Association of India, based in Bengaluru.

After learning about biodynamic farming, Harish knew this movement was vital for protecting the Darjeeling Tea Industry, which by then was suffering due to rejection of exports in the developed countries. The Western Countries, which were some of the biggest markets for Darjeeling Tea wanted organic produce, and production was still heavily dependent on chemicals here in our region.

Harish, met a group of like-minded people from Darjeeling and established the Society for Socio-Economic and Sustainable Development (SSESD)

Recalling about those days Pranay Rai, who is currently the Public Prosecutor in Darjeeling, who served as the Secretary of SSESD says, “I fondly recollect those days way back in 1989- 92, post DGHC accord, where he had organized the Society for Socio-Economic & Sustainable Development advocating against use of chemical on the more than 150-year-old tea bushes and introduction of bio-organic tea. Back then, Croatia was the only country that was importing our tea, and without exports Darjeeling tea industry would have collapsed.”

“Harish uncle was one person who was an exponent of the present bio-organic tea and it was because of his efforts through SSESD that organic tea production actually started in our region. Goodricke was the first major company that transformed their gardens to organic, and the rest followed their lead. After that he was instrumental in bringing the WWF to Darjeeling, that helped in restoring many endangered species especially red panda in the region” he says.

It was because of Harish Mukhia’s efforts, that the World Wildlife Fund (WWF) provided support for promoting organic farming in the region through Project Serve. Harish, was engaged as an advisor. Later he was advisor for many other projects including the Teekampagne’s Chai Project.

He was always generous with his knowledge and skills and never turned down a request for help from those in need. It is to his credit, that the small grower’s movement started in Darjeeling. He promoted cooperative of small growers under the label of Organic Ekta Small Growers’ Society, which is gradually transforming into a community movement for taking back control of the economy from large corporations and business entities to the hands of small farmers.

In his last interview, Harish Mukhia had shared his concern about the Darjeeling region and particularly it’s tea industry. He had said, “today most companies are only concerned about their profit margin, they don’t care about the tea, the bushes or the people. Till there is profit, they will suck it dry, and abandon the gardens later. We must change this.”

Harish sir’s life was well-lived, and the movement he started is growing stronger by the day. He was a visionary who envisioned a better Darjeeling. We hope his story will inspire the present and the future generations.

You can watch his full interview from 2017 here

Be the first to comment on "Harish Mukhia – A visionary"