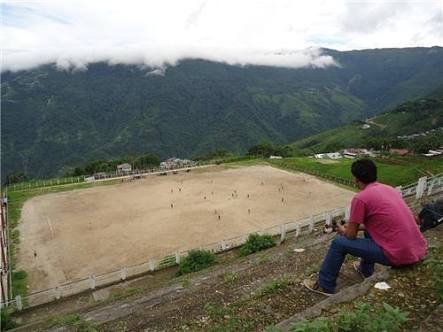 Sports has always been an arena for politics. Football especially has been an effective tool for politics, simply because of the range of emotions, it arouses among the masses. History shows that on the one hand sports has been appropriated by the powerful to reign in the powerless. Hitler used the Olympics to showcase his authority. On the other hand, the powerless have also used it as a tool of resistance and dissent. Franco, the Spanish dictator was the patron of Real Madrid. Catalonia had held the longest against his coup. When he was successful he had killed an unaccounted number of people. To oppose Franco and Spain, Barcelona club was used by the Catalonians. Barcelona for many years also did not advertise anything in their jersey, as the colour red and blue is a symbol of Catalonia, a colour that was inspired by the French revolution. When the design of the jersey was changed and the colour white was added in their jersey it was opposed because white was seen as the colour of Real Madrid, the club of Franco the military dictator patronized. Barcelona was thus the epicentre of resistance.

In Brazil when football was introduced, the natives were not allowed to come into physical contact with the white players. That’s how the native Brazilians developed their fantastic dribbling skills as a technique to avoid contact and any resultant punishment that might be given to them. As the natives developed their footballing skills and started winning matches, a policy was introduced which made it mandatory for the players to sign their names if they wanted to play. As most of the native players were illiterate a club, Vasco Da Gama came up with the idea of giving the players short nicknames so that they could at least sign. Today the Brazilian dribbling skills and nicknames that are known in almost every household were actually modes of resistance against racial discrimination. (Goldblatt 2014). The Black American Football players during the National Football League in 2017 expressed their dissent by not rising up when the national anthem was sung. President Trump tweeted this action as, “total disrespect for our great country.”Michealson wrote in the Daily Beast that “to respect –for whatever cause, left or right wing- is to make real the best ideals of America; freedom of speech, democracy, the rule of law. Protesting brings those ideals into reality. It is the opposite of disrespect and despair: It is to call our country to account and to say that we can do better” (2017). The Tibetans highlighted the Chinese occupation of Tibet and their “Free Tibet” movement during the Beijing Olympics. Closer home, East Bengal Club was formed to protest against the treatment meted out to the Bengalis of East Bengal by those from West Bengal. And Mohammedan Sporting Club came into existence to preserve the identity of the Muslim community.

Seen in this context of football as a political tool, the recent carnival in Darjeeling sponsored by the State and executed by its cronies can be seen a classic example of state exercising its control in the guise of a celebration. It could have been an opportunity for the people to rise to the occasion and express dissent against the atrocities of 2017/18 . It could have been a platform  to say that normalcy has not returned and will not return till our dreams are fulfilled. Football has always been the game of the common people, the proletariat, and throughout history it has been used as a tool of protest against the dictators and authoritarian leadership. The recent event in Darjeeling to celebrate football was ‘carni-evil-ish.’ The grandiosity of the celebration was astounding especially in the context of the terror that the people of the hills recently experienced. Football has fuelled numerous political movements, but in the case of Darjeeling it was used to douse any fire of freedom that may be alive inside the Gorkhas. The idea was to use the carnival as an opium to lull the people. The Arab Spring which changed the course of history in Egypt owes a lot to football fans. Truce between the fans of Cairo’s two arch-rival football clubs, Al Ahli and Zamalek, was instrumental in fuelling the Egyptian revolution. “The Moslem Brotherhood were joined” by these fans “who had agreed on an unprecedented truce in order to express their opposition to the autocrats in elite positions of political power” (Dorsey 2011). Mubarak was ousted on February 2011 and football fans played their part (Duerden 2012). In the former Yugoslavia, ethnic groups have used their respective clubs to raise nationalism. Red Star “fans clubs played a pivotal role in the revival of Serbian nationalism- the idea that the Serbs are eternal victims of history who must fight to preserve a shred of their dignity” (Foer 2004) and Red Star fans consider themselves as agents of political change.  Barcelona Football Club has been the symbol of Catalan nationalism. Barcelona represents the Catalan way of life and also its desire to separate from Spain. Pep Guardiola has been a vociferous supporter of the Catalan movement and makes it a point to  participate in the demonstrations. Recently he wore the yellow badge in protest of the thousands of Catalan nationalists who have been jailed by the Spanish government. From Latvia, Lithuania, Estonia to many of the former Soviet republics football and fans have been instrumental in politics. Every victory for the Dutch over the Germans is considered as a revenge for the five years of occupancy of the former by the latter. The point here is that is football is intrinsically related with politics and can play a huge role in spreading and arousing nationalism and that the football lovers of Darjeeling missed the opportunity to dissent and resist the oppressive political authorities when an opportunity was provided in a platter.

The clamor surrounding the World Cup was just the opposite of what is happening to football at the local level. Even the presence of a fourth, of those ‘celebrating football’ in Chowrasta, at Lebong Stadium, to watch the local match would have been a ‘normal’. The plight of the local tournaments, clubs and players has been pathetic for quite some time now.  It all started after the GNLF came to power in 1988 after the signing of the DGHC Accord. Prior to this period football in Darjeeling was one of the most cherished games. Gold Cup was like a festival. But it all changed once DGHC came into existence. The zeal to show its authority and control over the hills the then dispensation introduced the Shahid Cup with 2 lakh prize money. The money was good for the clubs and the game itself, but its illogical and irrational way of implementation ruined all sports in the hills. The existing sports associations were rechristened and the officials with loads of experience to run the sports were replaced by the sycophants of the leadership. All the funds were diverted into the Shahid Cup thereby making all other tournaments redundant. (There are other factors as well but would be discussed separately). More importantly, the most prestigious of all, the local leagues were completely scrapped from the local calendar. Prestigious tournaments like Jasoda Giri, Harley Cup in Darjeeling did not take place for a long time. RBGM in Kurseong does not take place till now. These were tournaments were the best teams of the country would come and participate and the local players would get an opportunity to test their skills against better teams and players. In an amateur structure where people played for fun, the lack of tournaments destroyed the spirit and enthusiasm of the players as well as the spectators. The politician would strut on the ground, donate some money and demonstrate his control in the administration of the game. Had there been any ethical office bearer in the sports association, things would had been different. Similarly had there been anybody at Chowrasta to stand up to  the authorities, the endeavor to show that normalcy has returned to Darjeeling would had been unsuccessful and the rest of the country would have known that Darjeeling is not smiling and is still mourning the death of many. As a football player and a Gorkha I bemoan these lost opportunities.

Elections 2019: Voting Basics for All

EXCLUSIVE: Supreme Court Hears Bimal Side of the Story Today