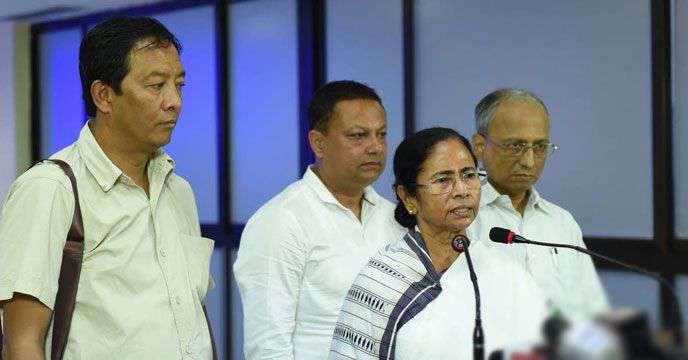 The hasty setup of the Gorkhaland Territorial Administration – Board of Administration (GTA BoA) makes no sense, in fact, it’s an absolute nonsense. While there is a provision for administrative setup in each and every district headed by a bureaucrat of the rank of a DM (IAS or IAS conferred or state civil servant). How fair or wise is it to have a parallel administrative setup as the BoA?
Looking into the hasty ‘setup’ we only see nominated heads, some of whom stand accused of violence and arson in the recent GL agitation. There could have been a retired civil servant heading the board but again the presence makes no difference, still, because of political status as enjoyed. The “setting” up of this ‘setup’ seems to have been heavily influenced by bureaucrats and ministers both at the centre and at the state. As we could see no protest or a word of caution coming from the centre against the same, while it was being formed. Seems like everybody wanted a stop-gap measure.
Now, counting on the powers given to BoA. No one knows. Everyone is in the dark. Not a single resolution was passed nor have any political party reached to any such agreement with the state or the center. They have been thrust upon the people here, by Bengal. They have been imposed upon us.
The state of confusion amidst all the claims by these Bengal state agents, is, what actually are they looking upon vis- a- vis people’s concern and development of the region as a whole? From where are the funds coming? Are they channel to funds allocated to GTA? Precedence shows that Subash Ghising was appointed as the Caretaker administrator of the DGHC till elections to it or a new administrative body was formed, so too for a fixed tenure. As with the BoA (simply jugglery of words but basically caretakers), there are her to ensure the transition to a new body.
Here’s a simple straight question to Head of BoA, Mr. Binoy Tamang. The common people are not aware as to whether the tenure of GTA is actually over or not? If the GTA Sabha stands dissolved? Mr. BoA Head was the one who was seen destroying the copies of the GTA agreement in the middle of D-Town. If a party to an agreement withdraws from it, the agreement becomes null and void. Logic questions, how can one be part of a system that one helped erase? How can one be party to something that isn’t there?
Further, parallel to statehood protest one should not forget that equal priority was given by people to the scrapping of the GTA and acceptance of any other similar setup. All other political parties too were of the same opinion.
The amount of political dirt we saw in the recent political hotchpotch is beyond anyone’s imagination. We saw politics of revenge not going in favour of junta. We also saw politics of opportunism, again not matching Janta’s terms. Ultimately, it turned out to be the battle between politicians with Janta’s aspirations completely sidelined. We saw the replacement of leaders (with no caliber) of course. We are also seeing political opportunists with evil intention to overthrow the current one.
The center, however, unmoved despite the aspirations of the common citizens however compromised. All the three organs of the state are there for the well being of the citizens but in recent times we have seen that “well being” part being thrown out of the window.
Phewwwwwwww!!
I remember a netizen drawing an analogy “A game of throne begins” and it seems so apt.
Writer: Rajib Mukhija

SEE ALSO:  Welcome to Darjeeling, where Cleanliness is nowhere near Godliness
Powered by Inline Related Posts