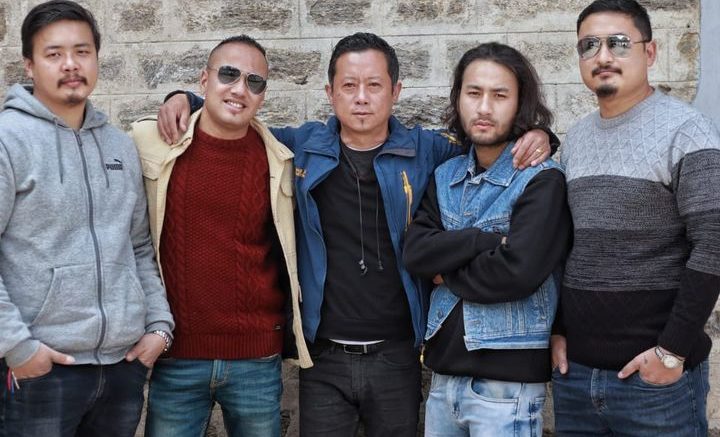 
Darjeeling is a land blessed with music, “Educators” continue with the glorious musical traditions of our land. Different from the recent deluge of “Folk-Pop” that has dominated the Nepal music scenario, we are happy to introduce the “Educators”, a band that is rooted in rock.

TheDC: Who are the “Educators”? What brought you guys together?

Educators: It is the love for music and common interest that brought all of us under the same roof “Educators”. We work together as Teachers at the Turnbull H.S. School we named ourselves as EDUCATORS. Our Drummer Ashish Shreshta completed his schooling from Turnbull H.S. School, and is now in college.

To put it formally, “Educators” are a Nepali rock band formed in 2018. The band is influenced by rock and the new wave of Nepali heavy metal and soft rock music. We like to experiment with music by blending mainstream traditional concepts with rock/soft rock genres.

TheDC: Have you guys performed anywhere?

Educators: On October 20 of 2018, we debuted at GDNS hall, with some renowned bands of Darjeeling. From there the journey started and since then we have worked on the creation of our originals. SAMAY, which is our debut single, was released on Sunday the 23rd May 2021.

TheDC: Tell us more about “Samay”

Educators: “SAMAY,” reminds us how our life sways between two extremes.  “Happiness and Sadness”, “Pleasure and Pain”‘ are two sides of our life, ‘Thinking’ is an imaginary wheel that processes, “Pleasure and Pain”, we experience both, but in the process, the imaginary thinking wheel, which grows bigger the more we think, should not ruin our life. Don’t let yourself come under the pressure of your Thinking Wheel and lay waste to your life. Love and live your life to the fullest. Life is so uncertain so make the most of it. Live, love, motivate your loved ones, stay happy, it is with this message we created this song” says lyricist and the band frontman Sherab.

TheDC: What next, what’s cooking?

Educators: We are more inclined to work on our original compositions, rather than doing covers. There is a lot more coming, next, we have “NAATA” a soft rock song, “JHUKDAINA GORKHA” with more cultural taste, “SUNSAAN CHA” and a lot more…

Besides imparting quality education, we would like to share our message of love to bring about unity among the people of Darjeeling hills, through music…

Rinzing Namgyal Bhutia aka Sherab Namgyal is the Frontman of the band. He is the Lead Vocalist, Song writer and Composer. Originally from Sukay Pokhari, Sherab is not a trained singer but was part of the Choir at St. Augustine’s School (Kalimpong) since childhood, and later at SUMI (Kalimpong) where he used to sing tenor and bass under vocal coaches, Late Mr. Chandra Mohan Ghising (SAS), and Mr. Sanjay Samuel Rai (SUMI).

Previously, he had fronted a few short-lived bands like “Aatma”, “Shristi” from Sukay Pokhari. Performed at Gorkha Rocks buildup shows and also given invitational performance at Sikkim Manipal University.

He has written and composed songs Aandakarma, Maan, Samay, Jatitwa (lyrics Suresh Mukhia), and is now the songwriter and lead vocals at EDUCATORS. His previous recordings include songs in Gorkha Rocks – Volume II & III, and Noise Volume I (a rock songs compilation).

Avyuday Naween Khaling is the bassist for the band. He is interested in all genres of music with a further incline towards Classic rock, Heavy metal, funk, and blues. He learned to pick up the bass guitar listening to bands like Iron Maiden, Megadeth, Metallica, and famous Darjeelingey bands like Mantra and Reincarnation.

“I was never into the public music scene until Educators happened, where all of us blended as a band and being colleagues, we have the utmost respect for each other. Our passion for music binds us together” says he.

Regan Rai is the lead guitarist and music composer. Born and raised in Darjeeling, Regan is a talented guitarist. He is an innovative and technically gifted guitarist. He was influenced as a guitarist by the likes of Paul Gilbert, John Petrucci, Marty Friedman. His solos are a big part of what gives the song its enduring appeal.

Ashish Pradhan the drummer for the band is a former student of Turnbull Higher Secondary School. His brilliant drumming provides the rhythmical base for the band. Encouraged and assisted by his friends he started drumming in 2014. As a drummer, he got influenced by Vinnie Paul, Chris Adler, etc. His career started with his creativity and he has also made some appearances with other bands like “Left Behind” and “Unwise Obligation.”

Mishael Pradhan is the Keyboard player. He has been playing piano and keyboard since high school. He currently teaches music at Elim Melody Academy and is a teacher at Turnbull HS school.

Be the first to comment on "“Educators” – Portrait of a Band"