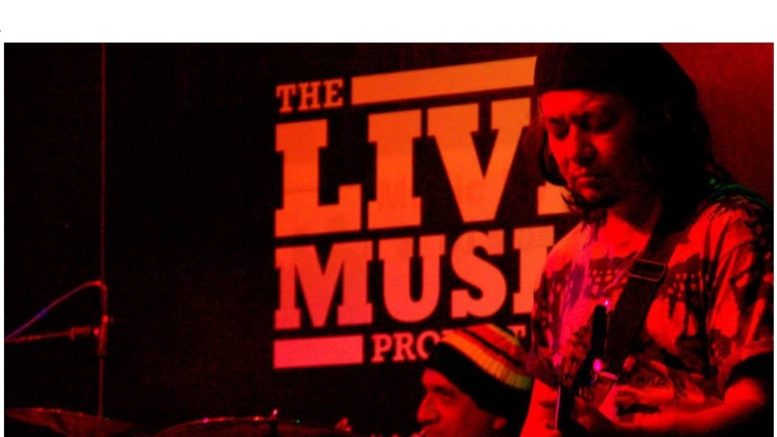 
Benoy Rai, a Darjeeling based musician, has recently released his new solo album “Can’t Lose the Blues”. A hardcore music enthusiast, and a seasoned artist, Benoy has been a part of the music revolution in Darjeeling that saw the rise of Band Culture.

We sat for a short interview with him.

TheDC: First of all, tell us about yourself.

Benoy: I was Born and brought up in Darjeeling. I did my schooling from St. Joseph’s School and later completed my graduation from St. Joseph’s College. By the time I finished college, I had already played in most of the local bands, starting with The Blue Blood, Mountain Wind, U.S. Band, Magnum Opus and Rusty Nails. Then I moved to Mumbai. Mumbai was a great experience. There I met a whole bunch of new great musicians. I did studio sessions and discovered the producing and song writing side of me. There I realised that people focused more on original material. I got a chance to work with great producers and played with different bands there. I also recorded a smooth jazz album with Gavin Hamburger from Australia and then my second album one was with my band Groove Suppa. I eventually got tired of the city life and moved to Goa for few years. Now, I just finished recording my solo album “Can’t Lose The Blues” which got released a few days back.

TheDC: What inspired you to pursue music?

Benoy: When I was growing up, I heard great music all around me – at home or in my neighbourhood. Every house had a guitar. There were lots of bands in town. I think those days music and football was our way of life. That was the Darjeeling culture. And all the great music videos we got to watch in the local video parlours… Even in the Capital movie hall, I remember watching Abba the movie and many more… Man! I could go on and on… There was so much music all around those days.

TheDC: Did your school, and by extension, the town play any role in your rendezvous with music?

Benoy: Of course it did. I started playing guitar when I was in school. We had bands then. I remember the first concert I got to watch in our school Fraser hall. The band was ‘Stills’, the band of Mr. Patric Wilsons and his college mates. I remember Tony Da (Banks) was also in that band and these guys were belting out all the Beatles songs. Man! I remember one point when I was in tears… And I think it was Sapna Di. Yes!! that was my initiation. These guys did it for me. And obviously there were the U.S. band guys And Mangnum Opus guys. They were our heroes. There were also the Forbidden Fruit Gang. Those Dajus also inspired us a lot those days. I learnt classical guitars under Jeevan Pradhan Sir for sometime – another genius.

TheDC: Were your parents supportive about you pursuing music?

Benoy: Yes!! They were very supportive and they still are.

TheDC: What difficulties did you face pursuing music ?

TheDC: Who is/was/has been your biggest inspiration?

Benoy: Talking about my biggest inspiration, immediately the name Roy Venketaraman comes in my head. When I moved to Mumbai I met Pervez Quadir, son of my class teacher in school, Miss Quadir. He literally introduced me to the scene there. He took me to the studios and introduced me to everyone. We played and even wrote some songs together for sometime. Through him I heard this name Roy who was playing with the Waillers those days. And finally one day I got to catch him live in ‘Jazz by the Bay” with Mr. Louis Banks. And man!! I was totally blown by his playing. It was bliss. that much soulfulness in the playing. I can never forget that night. Nobody had touched me so much. Then I got to hang with him for many years. So, ya he’s been my greatest inspiration. Most down to the earth person. And from him the biggest thing I learnt was to be true to the music. In his words, “when u play Say Something“. So ya! he has been a brother and my biggest inspiration.

TheDC: Belonging to a small town, was it difficult for you to pursue music?

Benoy: After living in a beautiful small town like Darjeeling, with all the great vibe those days , where everyone knows everyone, it gets difficult to live in a big city and pursue your dream. For that, you should listen to the song “Back Home Blues” in my new album.

TheDC: Tell us something about your new album.

Benoy: My new album titled “Cant Lose The Blues” just got released few days back. It has got seven tracks in it. Some songs I wrote while I was still in college and some are freshly written ones. The lyrics of one of the songs “All Out Again” has got contribution from my friend Puran Mukhia (U.S. Band). The song which is very dear to me, “Shine On” is for all my friends and our Darjeeling Town guys who, I think, we lost early in life. There are many guys I used to play with who are not here with us today and somewhere I feel their contribution in all songs I write and play. Drums and some bass guitar was recorded in Yashraj Studios Mumbai by Shantanu Hudlikar and the other parts in Ashok Honda Studio. All my friends who’ve heard the album so far have liked the drums sound as it sounds nice and big – just the way I wanted. All because it was mixed and mastered by the great Billy Decker from Nashville USA. Since its out, now I’m looking forward to playing it live.

TheDC: Where do you see yourself in the next 5 years down the line?

Benoy: In the next five years, I really don’t know where I’ll be…Right now I’m just focused in the present.

TheDC: What would your message be to the youngsters who want to follow your footsteps?

Benoy: My message to the youngsters would be to “Just follow your heart” and not be afraid to get out of your comfort zone.

We wish Benoy good luck with his new album, and are sharing the links to the songs of Benoy Rai’s newly released album. We hope you all like the songs and enjoy the same.