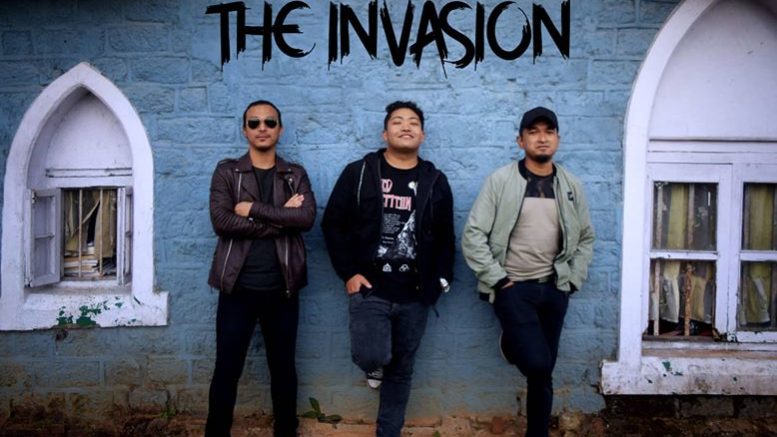 
Darjeeling was once known as the ‘Mecca of Rock in Asia’ and “The Invasion” is the latest band trying to make its mark felt here.

The Rock & Roll and Hard Rock scene set by amazing bands such as The Hillians, Extreme Moderation, Turquoise and Jade, The Diamonds, Prism, Forbidden Fruit, Magnum Opus, Pralay was later followed by bands like Rusty Nails, the US Band (where US is short for Unity of Souls) among others, makes Darjeeling the leading light of Rock music in India. Following on the footsteps of these greats, is an up and coming band from our hills “The Invasion”.

When Chhogel Sherpa Holunga first sent us their single BLACK FLAG our Music editor couldn’t get around to listening to it right away, but once he did, he was hooked and he has been playing it all day long. “Highly Invasive” is what our music editor describes this amazingly well written, well composed, well-edited and mixed number, with guitar riffs that will compete with the best in India and the world.

We sat down for a short chat with them.

TheDC: Who are “The Invasion”, what brought you guys together?

TI: We are a recently formed The Invasion, but we have known to each other from very long time. The music taste of all the members which is Rock /Hard Rock is what brought us together

SEE ALSO:  PEN DOWN IN GHOOM JOREBUNGLOW COLLEGE - Who's to be blamed?
Powered by Inline Related Posts

TheDC: Have you guys performed anywhere?

TI: We haven’t performed anywhere as a Band right now, but all the members of our band have performed in various platforms like IITs, IIMs, Pub

TI: Right now we are focusing on band’s first EP (extended play) and later on we want to go for contests like Hornbill, Shirock Music Contests, and all other rock contest in India and as well as outside and lastly we want to do gigs all across the world.

Also our second song Streets is likely to be released next month for which Mixing/Mastering is done by Anuj Pradhan at Sacred Heart Audio Workstation.

TheDC: Tell us about your song Black Flag? Why is the flag black?

TI: It’s a song of taking a stand against a corrupt and dishonest system and people in power. It is a song for the youth to speak out against tyranny, nepotism, corruption and domination. The flag is BLACK because it’s the flag of protest.

Indeed it is, and we are thrilled to be the 1st platform to publish the Interview of The Invasion, which we are sure will go a long way in rewriting rock history in our hills and the nation.

Rise up we got a battle to win

Against a system full of sins

Tyrant rulers all the way

Are we just some livestock

They are filled upto the brim

By stealing from their kin

united we stand against this tyrant system

Your sacrifices go in vain

You’re fighting a war without a name

Innocent’s blood in your hands

will torment you beyond the grave.

So cmon my brothers

remember the fallen ones

we will fight until the end

till our dying breathe

against the tyrant system

We wish “The Invasion” good luck in their quest and we look forward to publishing their second number too.

Tiger Hill, Darjeeling – On the Rocky Road to Snow