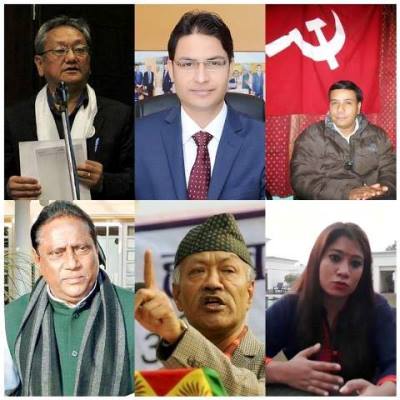 
The Gorkhas of Darjeeling Hills, as initially decided, could not arrive at a common consensus candidate. Therefore, a total of sixteen (16) potential and aspiring candidates affiliated to various political parties as well as those desiring to contest as independent candidates have filed their nominations for the position of the Member of Parliament from Darjeeling Lok Sabha Constituency in the upcoming General Elections, 2019. Darjeeling Constituency is, perhaps, one of the most fiercely contested constituencies in the country today.

If we closely examine the current electoral landscape in the region, the pattern broadly looks as follows:

Clearly, chances of an independent candidate to emerge victoriously are slim to none, both because of their past political baggage and also due to the lack of their ability to create an adequate platform for grassroots mobilizations. Further, lesser political parties like, CPIM, BSP, IDRF, GRC and even national parties like INC may also not be able to wield much impact in the ensuing election due to both local and regional political dynamics.

If we vote for TMC and make them victorious, there is a very high degree of probability that Mamata Banerjee would gradually grab the entire region under her fold. This election is just a gateway for Mamata and her party TMC to bigger political shares in the region via MLA and GTA elections, subsequently. The steady increase of TMC domination in the hills also means steady uprooting and waning of Gorkha identity and Gorkha political aspirations. They are inversely related to each other.

Under such a situation, in a decade or two, the entire notion of Gorkha and Gorkhaland may have been rendered irrelevant! We may be only referred to as a Thapa, a Chettri, a Bhujel, a Damai, a Rai, a Kami, a Sherpa, a Limbu, a Lepcha, a Bahun, a Dukpa, a Sarki, a Newar or Nepalis and many times immigrant Nepalis. We would, most probably, cease to be the Gorkhas. No one would have the guts to utter ‘Jai Gorkha’. We all may collectively and/or forcefully be made to chant ‘Jai Bangla’.

She is already on her way up the hills with a number of detrimental political cards. Her Development Board approach is one of the ways forward in this regard. She would never go for such appeasement politics had she loved the region and its people, to the extent of dividing the Gorkhas into ethnic lines. More importantly, TMC’s unscientific and draconic handling of the 2013 and 2017 Gorkhaland agitation/uprising is yet another critical example of how it perceives the Gorkhas and their long pending aspirations in the region.

If we vote for BJP and render them victorious, nothing may happen. The last 10 years were rather fruitless and going by that trend, the next five years may not bear fruit, either.BJP may be busy spreading its political and strategic tentacles across geographical spaces of the country with its Hindutva card. It may keep on struggling to take control of Bengal but without any notable results. BJP would not give us Gorkhaland! They have their state government in Assam. Has Bodoland been able to see the light of the day?

This MP would, in all likelihood remain a mere puppet within the larger framework and schemes of Bharatiya Janata Party!

However, the Gorkhas will have the freedom to shout ‘Jai Gorkha’ and ‘We want Gorkhaland’ under BJP unlike under TMC which is fundamentally and ideologically against the idea of Gorkha and Gorkhaland! And yes Gorkhas would, at least, have the hope to have their own separate state called ‘Gorkhaland’ or to be known by any other name someday.

The unscientific, unorganized and premature conclusion of 2017 Gorkha uprising has deeply lowered the self-respect and dignity of the entire Gorkha community. It may be difficult to reinstate our old glory in the foreseeable future unless we unite and stay united. For the first time, I feel insecure to wear a T-shirt that reads ‘I support Gorkhaland’ even in Kalimpong, not to talk of Siliguri.

Ever Enduring Nostalgia of Road Cricket in Darjeeling