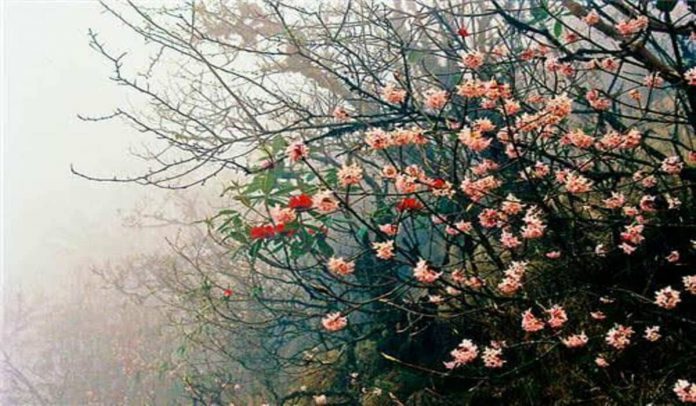 
Two decades, not a very long time passing, I walked away from the hills leaving behind the perfect chill hanging in the air, the muscatel cuppa tea amid those mountains, life then was always beautiful with the lovely smell of the pines and the burning dry leaves. The mist and the medley of the sun rays passing through the burnt orange leaves of the solitary maple across the famous patisserie “Glenarys” still resonate in my mind as I keep walking my imaginary walk through the mist towards the tempered sunlight of yore….

I returned to my Darjeeling after two scores and two years to a place which chilled not my senses but only my heart and mind. I couldn’t help but listen to the screams of my soul, “Oh Darjeeling, where have all the flowers gone, where are you??” The screams got louder as I drove up the barren slopes of the Peshok tea estate, those green and undulating hills where once the superstars of Bombay danced to the tunes of Laxmikant Pyarelal were now mere remnants of a love story gone sour, the sad state of affairs of the “Chai” industry. As a college-goer riding on shared taxis, the infamous “Syndicate ko Land Rovers” I had always longed to take a break for a photograph on these Peshok slopes but of course that had never happened and now when I rode my own car up these slopes, I wished never to stop ever again! The wide branched evergreen tree just around the last hairpin bend were those “tea garden belles” of yesteryears rested their bamboo baskets stands still – lone and desolute, its branches swaying sadly in the afternoon breeze as if singing the sad love songs of yore.

Change is inevitable they say, change is painful I would refrain after crossing the “tea break” points at Lopchu. The lopchu pedas and those red radish bunches sold at tiny windows alongside the piping hot vegetarian momos and a tongue shattering red chilli paste all washed down with a tiny glass of red tea with the perfect punch of lemon are no longer in existence. Those windows have turned into monstrous Kirana shops selling everything from packets of Lays, Kurkures to Kinderjoy bundles with the must-have pedas being degraded in size and stature. Anyways these hardly matter any more since the tea break spot has been usurped by the more tourist-friendly “Lamahatta” with its profusion of prayer flags, geometric flower beds and manicured hedges – the perfect selfie spots for yours truly!

Oh, where, Oh where have all the wildflowers gone?? Multicoloured “banbara” flowers, pale white, horn-shaped “dhatura” flowers, pint-sized “love me, love me not” flowers, those clumps of stinging nettles and the purple brush headed flowers which had no name, flowering all over the edges of the hills and vales have all faded into oblivion. All that I can see are those ugly pan-sized dahlias nodding their huge heads in the mist…thank god at least we still feel the mist in and around Darjeeling – probably the last remnants of a nostalgia that I live with every minute, every passing day. The flowers are no more but not so with the traffic, that remains unchanged especially during the “season.” Come JoreBungalow and you are stuck for what seems like ages on those curvy, tiny roads which merge seamlessly with the railway tracks. They rightly say so on those nostalgic Facebook posts, “it’s only in Darjeeling that a train gets caught in a traffic jam” and “only in Darjeeling you jump off a jeep, take a leak and again hop on to the same…”

And then you enter the Darjeeling town, all lanes are one way, you come in through one and exit through another. Driving up the old post office lane you realise that Darjeeling still remains at its best, a “walking town,” well it always has been since yesteryears, then everyone would be walking, the rich and the poor, the good, the bad and the ugly. In fact, the grapevine always buzzed with the fact that only the Governor’s car could traverse across the Mall. Past the post office and the “Rink” – the next stoppage had to be “Penangs” with its dingy curtained cubicles, wooden benches and the best tasting, juiciest momos in the whole wide world. The restaurant flourished with people at all times till closure time and a deliciously, mouth-watering smell of pork mixed with fresh onions and chillies. The best part of this place apart from the momos was the sight of the sparkling momo degchis placed upon the wood fire oven over which hovered the didi with her mound of maida roundlets and a huge casket of minced pork. Penang’s has now shifted upstairs as a full-fledged restaurant with rexine seats and polished cutlery. The heavenly smell of meat has been replaced by the smell of “citronella” and they serve the momos with tomato sauce from a bottle☹️☹️. As you climb higher up the lane “Sabnam”  the infamous ganja joint is no more and the glorious, darj defining structure of The Capitol with its clock tower lies in shambles. The Hayden Hall has been transformed into an emporium selling goodies from the seven northeastern states, thereby losing its identity as “The Hayden Hall” which we all sanctified. Clubside is richer in its looks with the “Innovas” replacing our golden land rovers so its just another taxi stand and no longer can be romanticized as “Clubside” and all the stylish cabbies with their stonewashed denim and top boots have all been replaced by normal taxi drivers, richer in branded clothing but lower on the style context.

Then as I entered the walking zone starting at the end of “Keventers” the only sigh of relief was the expresso and the hot dogs from Keventers which still tastes the same, but the place has lost its signature wrought iron chairs and beach umbrellas. Next door “Singh Studio” is no longer a studio, it been extended into a bookshop – still retains its supply of postcards with pictures of the toy train, Kanchenjunga and the works but has lost the “Archies Cards” and its humongous collection of the music tapes, I sorely missed the sounds of Air Supply, Uriah Heep and Lynard Skynard as the doors of the studio swung open to a flock of school kids who probably would not even know that Archies had a soul for every heart that broke, every love story that happened in the Darjeeling of my times. As I walked past was stuck by a deep longing for the softy ice cream cones that we used to relish in the freezing cold mornings en route to college, “Puris” the only medical store that sold softy ice creams is history, in its place stands an two-storeyed something selling shoes, clothing and lingerie with an array of leather bags. This ugly two-storeyed something has also merged the “Liangs” where uncle Liang sold his Chinese shoes and down under aunty Liang served the best “pork fried rice with Chinese sausages” prepared with love from her own kitchen and served in her own personal dining table all at a cost of thirty rupees a plateful. Sometimes I feel it was more of the need to feed the young and hungry than economics that drove the Liangs. Then the worst part – the solitary maple with its burnt orange leaves shining in the evening sun rays is nowhere in sight! A Kentucky Fried Chicken signage and a shop selling Samsung mobiles and electronics stand solemnly where my maple tree stood. Well its a pleasure to see Glenarys stands tall with its age-old structured windows and decor, the only thing missing is the exclusivity and the hesitation that people faced before entering this eatery of yore where through the open windows floated glimpses of the elite of Darjeeling biting into those dainty cucumber sandwiches with proper “Darjeeling” in porcelain teacups poured from pots covered with the floral cosies!

“The Mall” – the heart of Darjeeling town, where you could just about do anything – jog, meditate, laugh, gossip, fight, ride ponies, give speeches, carry out a cleanliness drive, oogle at girls or even boys, sleep on the benches, have a picnic lunch, dance, sing songs or simply experience the changing hues of the Kanchenjunga, still looks the same though the feel is completely missing. Horses are very few, its more plastic than horseshit filled and a huge LED television at the end of Chowrasta spoils it all, Oh why Oh why a television here??? And the quaint little crooked lane below the mall leading into the gates of Alice Villa and Hotel Elgin has been converted into a shopping mall selling Chinese made wind chimes, sleeping and laughing buddha statues, slippers and the works. Those crooked hideouts from where we used to watch Shahrukh Khan shoot for “Raju Ban Gaya Gentleman” and where the rosy-cheeked children played hide and seek has been rearranged beyond recognition – so much for those Chinese souvenirs!!

I did not dare to venture beyond unto the other end of the Observatory Hill lest I lose my imagination – the Darjeeling of my nostalgia where many a morn and eve I have wandered alone on long walks with dewdrops falling on my head and only those green rails and the Kanchenjunga for company…I really did not want to lose this feel which I shall make sure I carry to my grave.

1 Comment on "Oh Darjeeling! Where have all the Wildflowers Gone, Where are You?"