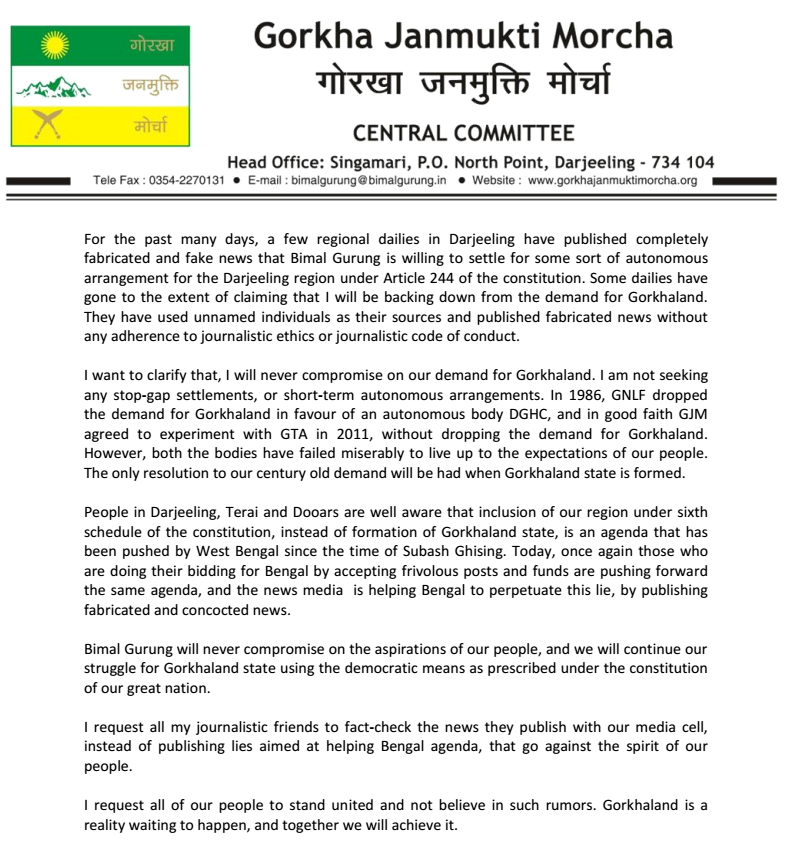 In a strongly worded press release, the Gorkha Janmukti Morcha chief has refuted claims of him seeking to settle for any form of ‘autonomous arragnements’ as had been mentioned in local dailies like Hamro Prajashakti and Himalaya Darpan.

Refuting claims of any such settlement, Bimal Gurung has said that, he “will never compromise on the aspirations of our people, and we will continue our struggle for Gorkhaland state using the democratic means as prescribed under the constitution of our great nation.”

Here is the full press release...

“For the past many days, a few regional dailies in Darjeeling have published completely fabricated and fake news that Bimal Gurung is willing to settle for some sort of autonomous arrangement for the Darjeeling region under Article 244 of the constitution. Some dailies have gone to the extent of claiming that I will be backing down from the demand for Gorkhaland. They have used unnamed individuals as their sources and published fabricated news without any adherence to journalistic ethics or journalistic code of conduct.

People in Darjeeling, Terai and Dooars are well aware that inclusion of our region under sixth schedule of the constitution, instead of formation of Gorkhaland state, is an agenda that has been pushed by West Bengal since the time of Subash Ghising. Today, once again those who are doing their bidding for Bengal by accepting frivolous posts and funds are pushing forward the same agenda, and the news media  is helping Bengal to perpetuate this lie, by publishing fabricated and concocted news.

Bimal Gurung will never compromise on the aspirations of our people, and we will continue our struggle for Gorkhaland state using the democratic means as prescribed under the constitution of our great nation.

I request all my journalistic friends to fact-check the news they publish with our media cell, instead of publishing lies aimed at helping Bengal agenda, that go against the spirit of our people.

I request all of our people to stand united and not believe in such rumors. Gorkhaland is a reality waiting to happen, and together we will achieve it.”

The Inimitable Wonders Of Darjeeling Lingo

Be the first to comment on "Just In: Bimal Gurung Refutes Claims of Him Agreeing to Settle for Autonomous Arrangement"